23 year old Krishna Vasudeva from Mysore has entered his name in the record books for cycling from the southernmost tip of India, Kanyakumari to the highest motorable road in the world, Khardung La in Leh and then back to his hometown Msore. He cycled a total distance of 6,070 kms (3772 miles) over three and a half months.

In an interview, Krishna stated, “It has been a dream come true. The expedition helped me understand my nation better, our people and their cultures, which I would have missed if traveled in a high-speed vehicle. It is not a tough task if one has the will to do it.”

Krishna’s journey started on the 9th July this year. Krishna was not cycling alone, he was accompanied by a friend, who also has the same first name, Krishna Chaudhary. Vasudeva and Chaudhary cycled till Manali in Himachal Pradesh after that, Vasudeva’s cousin from Bangalore, Ashwin accompanied him.

Talking more about the journey, Krishna Vasudeva added, “We had to reduce our luggage weight comprising tent, food, clothes to 40 kg from 50 kg. Our racing cycle speed which crosses 60-70 km on a plane road reduced to 40 km. The route to Khardung La pass was arduous. A landslide happened about two kilometer away from our place. That was the loudest noise I ever heard in my life.”

When asked about what they were eating while cycling, the duo replied, “We used to have lots of tender coconut, besides having dry fruits, milk products with regular food.” Krishna Vasudeva has been a figure of inspiration to his friends along with whom he goes for long cycling rides on a regular basis. One of Krishna’s cycling friend, Ramya adds, “Krishna has inspired almost a dozen of his friends to cycle everyday. We practice on long routes.”

Krishna Vasudeva and Krishna Chaudhary have been cycling together for years. Earlier this year, they even completed the Mysore – Kodaikanal – Munnar route on cycles. When the cycling duo is not cycling, they are busy educating people on the benefits of cycling and how it helps saving nature. They also sell imported cycles like Dahon, Trek, Merida, RockRider, BTwin, etc in Mysore. He rode the Kanyakumari to Leh journey on a Trek cycle. To read Krishna Vasudeva’s personal blog, click here. 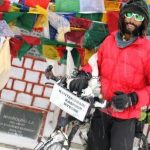 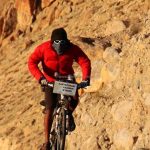 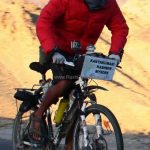