Datsun Magnite could be name of new compact SUV for India

Datsun India, the sub-brand of Nissan India, may not be doing particularly well on the Indian market with its range of affordable cars. These are aimed to rival the likes of the budget offerings from the market leader, Maruti Suzuki.

Now, a trademark application of an all-new Datsun product has been leaked online. Dubbed as the ‘Datsun Magnite’, Nissan India has filed the application for using the name on the Indian market, ahead of a possible introduction at Auto Expo 2020 (scheduled in February).

At this point, it is unknown whether the Datsun Magnite is a production-ready model or a concept. Either way, rumours claim it could be a compact-SUV since the segment is booming like never before in the country. 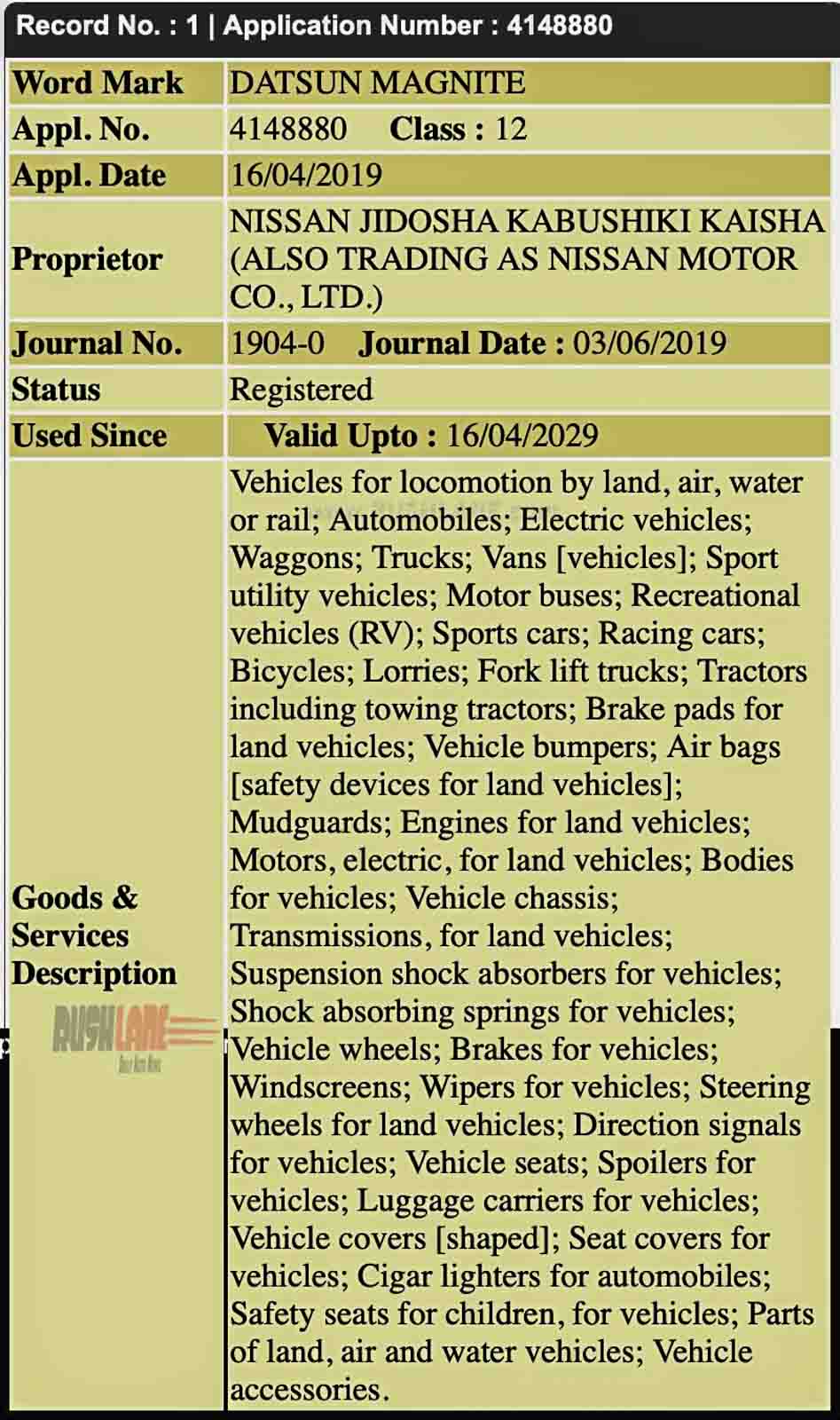 Datsun India plans to ramp up its Indian portfolio with quite a few products for the coming years. One of them will share its mechanicals with the Renault HBC compact-SUV concept (also set to unveil at Auto Expo 2020) and could most likely be the Magnite. Renault and Nissan share a healthy partnership in India and the market has seen multiple products from both brands that share the same mechanicals underneath.

If rumours are right, both the HBC and Magnite will be based on Renault India’s CMF-A+ platform which also underpins the Renault Triber mini-MPV. The primary aim of the platform is to build sub-four-metre vehicles in multiple segments within an affordable price bracket.

India is a volume-sales automotive market and major foreign brands that set foot in the country in the recent past learnt it the hard way during initial phases. In the case of Renault, the company brought down the premium Fluence sedan and Koleos compact-SUV as its first products, but could not gather enough sales. Things started working in favour of the French automotive brand only when the Duster and Logan were launched.

In fact, the Duster still manages to accumulate decent sales figures in spite of the tough competition. The company recently had to pull the plug on the Renault Lodgy; a decent choice in the MPV segment which never really impressed the wider mass due to the appeal of the Toyota Innova Crysta and the relatively-new Mahindra Marazzo. However, on the lower side of the price bracket, the Renault Triber is finding a lot of takers due to its excellent packaging and practicality.

Coming to the Datsun Magnite, we hope it will make things better for the brand. Even though the charm of a Datsun product is arguably low (at least in India), the brand was once a popular name in the minds of JDM enthusiasts across the world, thanks to icons such as the Datsun 240Z aka the Nissan Fairlady Z.