Whenever any biking enthusiast thinks of superbikes, one of the first brands which is ought to cross the mind is Ducati. Now, when one speaks of Ducati, he/she has to mention the Panigale which has been the aspiration of every speed seeking rider.

The Panigale moniker holds the same significance to Ducati as the Mustang holds for Ford. After waiting for an eternity, Indian motorcyclists will get to experience this thrilling ride as the Italian bike maker has launched the Panigale V2 in India.

The Panigale V2 has been priced at Rs 16.99 lakh (ex-sh), which is evidently on the expensive side. It replaces the discontinued Panigale 959 and is now the company’s entry-level motorcycle in the country. Ducati has already commenced the bookings of the new Panigale V2 at a token amount of Rs 1 lakh. The company says that deliveries of the bike are expected to begin soon. 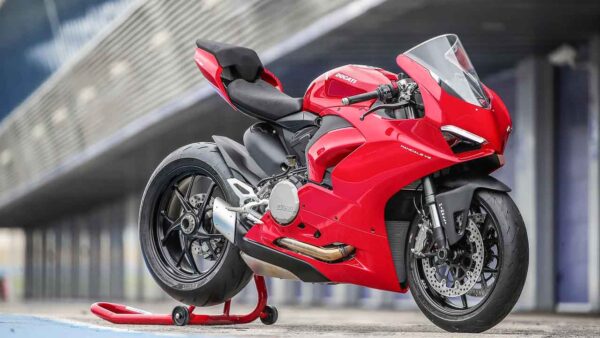 The new Panigale V2 made its maiden appearance at EICMA last year. It was initially scheduled to be launched earlier this year but the Covid-19 pandemic forced the makers to put the official launch on hold. The Panigale V2 is currently the only BS6 compliant offering from Ducati in India. However, the Italian bike maker plans to add a more powerful Panigale to its portfolio- the Panigale V4.

Performance is the biggest highlight of Ducati Panigale V2 as expected. This is due to a 955cc Superquadro twin cylinder motor which pumps out a healthy 155 bhp at 10,750 rpm and a torque of 104 Nm at 9,000 rpm. This output figure is greater than what was obtained in the Panigale 959 thanks to the new and larger fuel injectors which are placed at a different working angle and a snorkel which efficiently minimizes losses.

This engine is married to a six-speed gearbox assisted by a slipper clutch. It also receives a bi-directional quick-shifter as standard. It also employs a new exhaust pipe which is rerouted underneath the engine.

The new Panigale V2 is packed with electronic features which enhance the riding dynamics. These include Cornering ABS EVO, Ducati Wheelie Control EVO, Traction Control EVO 2, Engine Braking Control EVO and Quick Shift EVO Control among many others. These systems are based on a 6-axis Inertial Measurement Unit that instantly detects the bike’s roll, yaw and pitch angles.

Other feature highlights include a new 4.3″ colour TFT instrument cluster. It comes with Ducati Multimedia System (DMS) for smartphone connectivity. It also gets three ride modes- Race, Street and Sport which could be operated through a switchgear on the handle.

The Panigale V2 borrows many design elements from its elder sibling- V4. For starters, the signature twin headlamp setup with integrated LED DRLs in eye-brows shape make it unmistakably a Panigale. The LED tail-light at the rear is also a dual part setup common to the Ducati convention. However, there are a few unique elements of the Panigale V2 which makes it distinct. It features a single-sided aluminium swingarm and a more chiselled fuel tank. 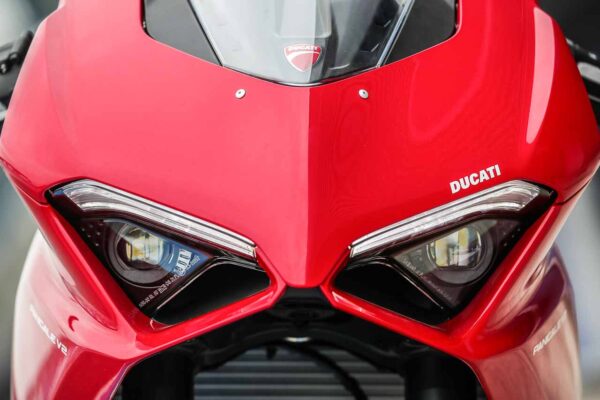 In India, it will be offered in two colours- White Rosso and Ducati Red. At almost Rs 17 lakh, it does feel a big pinch on the pocket but the owner gets the closest thing possible one could experience at a racing circuit with a MotoGP machine. It will compete with the likes of Suzuki GSX-R1000 and Kawasaki ZX-10R in the litre-class segment at the market.