EICMA 2020 cancelled, next edition to take place in November 2021

EICMA 2020 which was scheduled to take place at Rho Fiera, Milan, was supposed to be the 78th edition of the event

EICMA 2020, arguably the most important two wheeler show in the world has been cancelled. According to the official announcement, the 78th edition of the motorcycle and accessories expo has been postponed from its original date of 3-8 November 2020 to 9-14 November 2021.

Speaking about the decision to call-off the 2020 edition of the even which usually takes places in Milan, Italy, EICMA’s CEO Paolo Magri stated that decision was made with and for the two wheeler industry supply chain. He further added that the international value and leadership of the exhibition in the two wheeler world has prompted the organization not to bet on the stakeholders’ health during this COVID-19 emergency.

Italy emerged as one of the worst hit nations in this ongoing pandemic and Milan in particular, being the epicenter of the outbreak, suffered the worst. The country is slowly turning to normalcy with caution but a high-profile event like EICMA with thousands of visitors per day from across the world would surely carry a extreme risk. 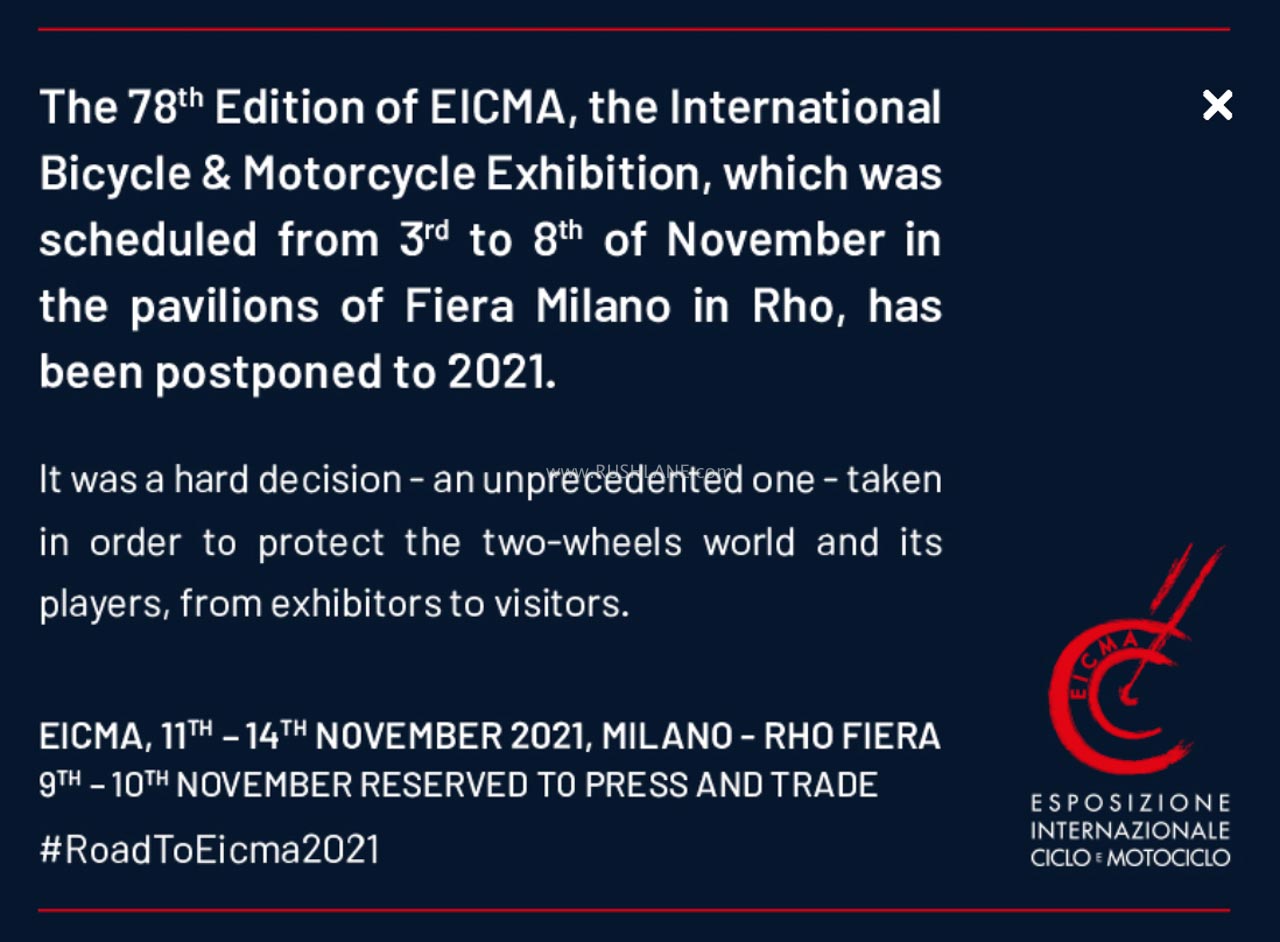 Magri also stated that the pressure of the market and economic situation of the auto industry has also played a part in pushing the 78th EICMA to next year. The massive event creates significant commercial and temporary employment opportunities in the locality.

Speaking about the postponement of the event, EICMA’s chairman of board of directors, Pietro Meda, said he is confident that the 2021 edition of the show will have a great symbolic value and would help the enthusiasts and members of the global two wheeler industry forget the ordeal that is 2020.

EICMA has traditionally been the preferred destination for the major global OEMs to stage their high-ticket world premieres. KTM and BMW have introduced their most important models in the recent times at the event, however, due to the pandemic, both brands announced much earlier that they were pulling out of EICMA.

Cancellation of international events, conferences and symposiums across the industrial sectors has been the theme of the year. Almost all automotive shows across the globe have been cancelled in 2020 and these cancellations could very well run into early part of 2021 as well. INTERMOT, another important two wheeler exhibition which takes places once in two years at Cologne, Germany, also recently announced that the event will not take place this year. Here is hoping for a better 2021.