The electric scooter segment continues to grow exponentially in India as conservation of energy and preservation of the environment takes on a new meaning. New entrants are entering the fray and it may be seen from the attached table that there is a definite surge in demand for e-scooters among buyers in India.

New EV incentive schemes introduced by the Government of India are going to bring about better sales even as there is a spate of new entrants into this segment. However, though there is a notable improvement in charging infrastructure, the higher prices of these electric scooters as against their petrol powered counterparts, coupled with lower range could take its toll on sales of electric two wheelers.

In the electric two wheeler segment, 97 percent of sales comprised of electric scooters while the remaining 3 percent included electric motorcycles and cycles. We assess the leading OEMs in terms of sales between April 2019 and March 2020 but take only the high speed electric scooter sales into account and not those offering lower speed of 25 km/h. 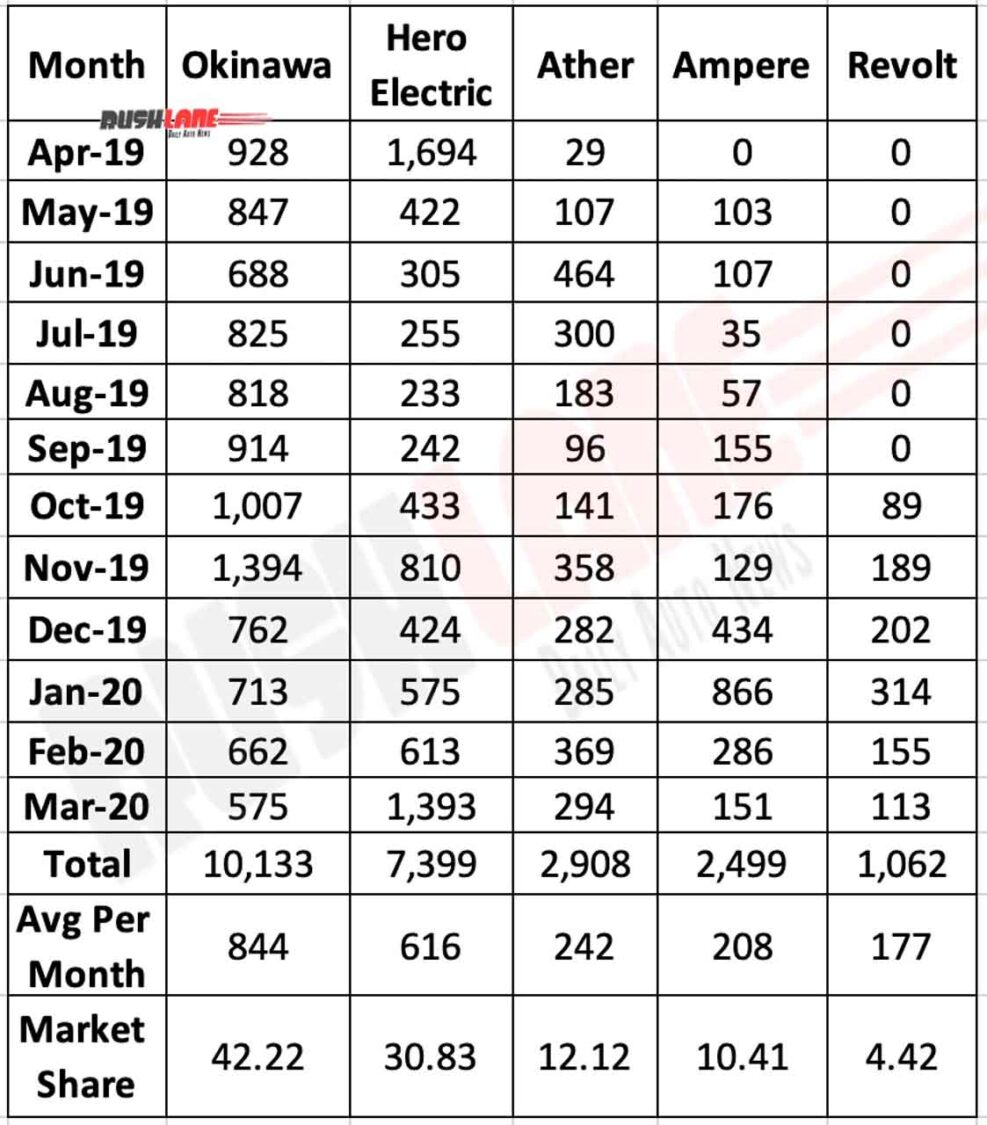 Indian electric two wheeler maker, Okinawa was the only EV maker to cross the 10,000 unit mark in the past financial year. The e-scooter maker, the first company to receive FAME II approval for the electric two wheeler segment, currently has 7 models in its portfolio with the popular ones being the Okinawa Praise (Rs. 69,790), PraisePro (Rs. 79,990) and i Praise (Rs. 1.08 Lakhs).

Total sales in FY2020 stood at 10,133 units while market share was at 42.22%. The best month of sales was in November 2019 when 1,394 units were sold. The company had also shown off the new Okinawa Cruiser at the 2020 Auto Expo and will retail at around Rs.1.2 lakhs making it the company’s most premium model.

Ampere Vehicles total sales for FY2020 stood at 2,499 units with 10.41% market share. Top sales were noted in January 2020 with 866 e-scooters sold during that month while sales dipped in February and March. In June this year, the company introduced the Magnus Pro electric scooter which went on to become the flagship model priced at Rs.73,990. With the new Magnus Pro, the company now has a total of six electric scooters in its line-up that include Zeal, Magnus, V48, Reo and Reo Elite, ranging from lead acid battery models to lithium ion e-scooters.