One of the most awaited SUVs, new Mahindra Thar launch is just a few days away. Though official bookings have not yet opened, many dealers in select cities have started accepting unofficial bookings. Some customers are even in the race to own first Mahindra Thar SUV. Now, Mahindra is giving everyone who wants to own new Thar, a chance to own the first new Thar. Today, Mahindra announced that they will not be selling the first Thar, but will auction it.

Mahindra said, “To celebrate 75 glorious years of Mahindra, we’re auctioning the All-New Thar #1. Mahindra will match the amount raised at the auction and the entire proceeds from the auction will be donated to either Naandi Foundation, Swades Foundation, or PM CARES fund, as chosen by you, to help India battle COVID-19.”

This is not the first time Mahindra is auctioning the first vehicle for a cause. They had also auctioned the first batch of Jawa motorcycles, proceeds of which were donated to Armed Forces Flag Day foundation. 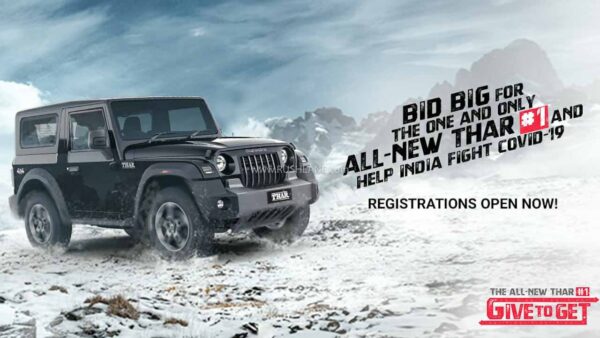 To stand out from the crowd, the first Mahindra Thar will be a special SUV. Mahindra says, “A customised badge on the vehicle with your initials, serial no.1 on the decorative vin plate on the dashboard and leatherette seats with a choice of below variants and colours* make the All-New Thar #1 very, very special.” In order to bid, you will need to register yourself here – https://auto.mahindra.com/events/all-new-thar-auction Bidding will be open from 24th September to 27th September.

As a matter of fact, new Thar will offer better off-road capabilities as compared to the outgoing model. It comes with a new ladder frame chassis that offers a range of advantages. Key benefits include improved torsional rigidity and increased approach and departure angles. The new chassis complies with latest crash test norms and ensures smooth, vibration free rides.

With the new Thar, Mahindra will also be targeting the usual SUV buyers looking for unmatched performance as well as the full range of creature comforts. Towards that end, new Thar has been equipped with features such as touchscreen infotainment system, bucket seats, automatic climate control, and forward facing seats.

Exteriors have also been upgraded with LED headlamps, trendy LED DRLs, 5-spoke alloy wheels and prominent fenders. It can be said that new Thar has evolved to become a complete family SUV, all while retaining its unparalleled off-road character.

New Mahindra Thar will be offered in both petrol and diesel engine options. The petrol engine could be a 2.0-litre mStallion turbo unit whereas the diesel option is expected to be the 2.2-litre mHawk engine. Both manual and automatic transmission options will be available.