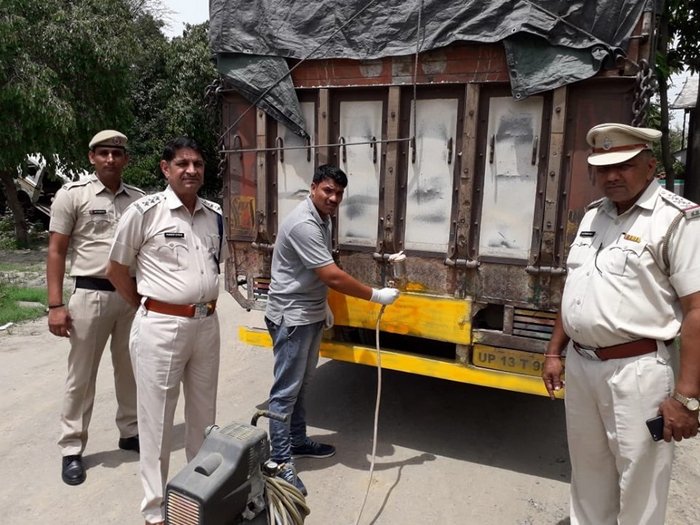 Haryana Police is focusing on accident prevention when it comes slow moving, stranded or illegally parked vehicles on highways. The big brainwave isn’t altogether new but there is now an attempt to re-enforce it. Coppers are keen on having parts of the rear of commercial vehicles painted in fluorescent colours.

Having the rear painted in fluorescent colours is all the more necessary in vehicles that lack reflective tapes pasted on their rear. Coppers have begun the drive in Panipat district.

Additional Director General of Police (Law and Order), Navdeep Singh Virk identifies that a number of accidents involving vehicles on highways especially at night is due to lack of reflectors on such vehicles. The end result is loss of human life.

Re-enforcing the use of fluorescent colours, even if hand-painted onto vehicles would be a step forward in minimizing risk of accidents at night by being noticeable to vehicles driving up. Most times, drivers are unable to notice a stranded vehicle in time and this results in high impact rear ending and crashes.

Another measure to strengthen the move is to carry out a special drive to ensure safety triangle reflectors are drilled onto the rear of vehicles in Panipat and Karnal districts. This too is aimed to reduce the number of incidents resulting in fatal road accidents on highways.

“We are getting rear of such vehicles painted with fluorescent colours in Panipat under the supervision of IG Karnal Range. Districts Karnal and Kaithal would be covered shortly and later on, it would be replicated in other Ranges in collaboration with Traffic and Highways Police”, added Virk.

He added, “Road mishaps on highways could be avoided and precious lives saved if commuters follow traffic rules and keep reflectors in a good shape.”

There’s also renewed focus on the 4 E’s – Education, Enforcement, Engineering and Emergency in regard to accident prevention and control. Haryana coppers is focusing on these approaches in coordination with all concerned departments. Sustained efforts have had a positive outcome, and road fatalities have declined by 6.7 percent in the first four months of current year in the state. Coppers here are looking to reduce the number of fatalities even further.