Bad behaviour on our roads is an ever-growing everyday problem. With India claiming a large number of pedestrian lives on a daily basis owing to breaking of traffic rules and bad roads, efforts are being made to curb the number of accidental deaths.

These efforts don’t seem to have any immediate effect. Problems are further compounded with road users refusing to follow traffic rules, and flouting rule after rule when caught in an attempt to run away. 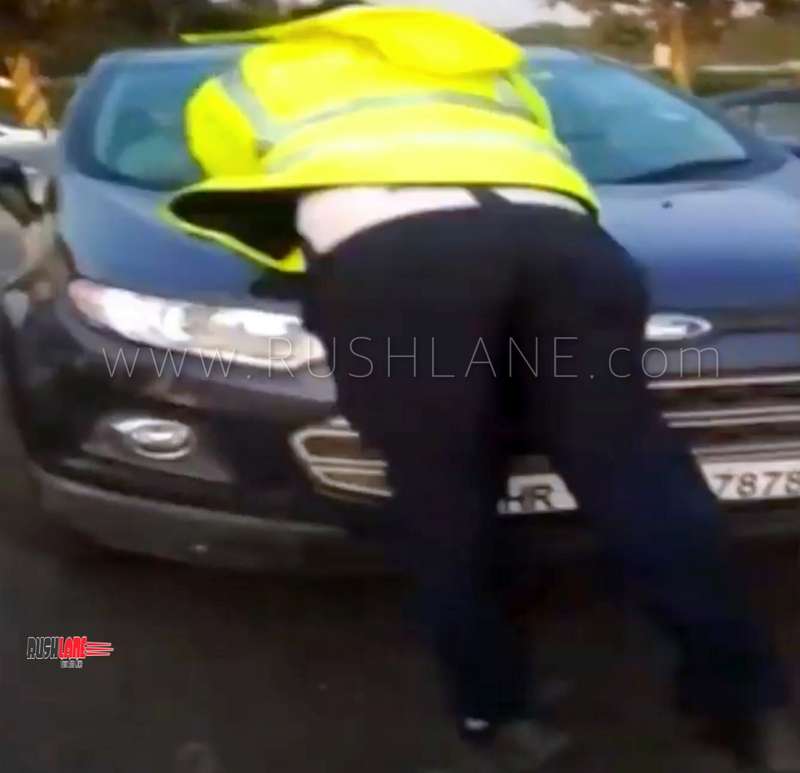 In an update by ANI – Man stopped by traffic police for driving on the wrong side near Signature Tower Chowk in Gurugram, dragged traffic personnel on the bonnet of his car when the personnel tried to stop him. He was later arrested & the car was also seized. Haryana (19.12.18).

The incident took place on Wednesday as a traffic cop stopped a Ford EcoSport near Signature Tower Chowk as it was on the wrong side of the road. Instead of stopping after being apprehended by the copper, the driver chooses to drive on in what evidently looks like an attempt to do a runner. Watch the video below.

Seeing this, the on-duty copper leapt onto the bonnet to thwart any attempt to pull away. The errant driver still doesn’t stop and attempts to drive on and did move about a 100 metres by when he was forced to stop as another car has driven up in an attempt to block the runaway driver. The videographer too sprinted upto the car as the drama unfolded.

Upon stopping, the copper asks the driver to switch off the engine and step out of the vehicle. At this point, the driver makes a feeble excuse. He says that he was driving wrong side because the car in front of him was also driving wrong side. The copper then repeats his request for the drier to step out of the vehicle. He is then arrested and taken to a nearby police station. The Ford EcoSport too is seized.