Indian consumers since then have found a liking for such vehicles which has led to a surge in demand for SUVs in the recent past. While many other products have arrived in this segment with better features, affordability and value for money quotient, the Ford EcoSport is still a good bet for all its buyers simply because of its unique looks and impressive performance.

Due to its unconventional looks, the EcoSport also gives leverage to many enthusiasts to modify into something of their own taste. The case here today is a clear example of that. One of the car owners (Satyakam Banerjee) in New Delhi has modified his EcoSport to give it a more rugged look. Youtube channel Automobile Informant Vlogs has created a detailed video on the same.

Modifications on the EcoSport

The first thing that one notices is the big ‘FORD’ moniker on the front grille which accentuates its bullish look. The same set of cosmetic mods are also available in the Endeavour as an after-market accessory which is commonly witnessed on the roads. The same also fits the facelifted model of the EcoSport. It also receives a ‘Raptor’ badging just above the grille at the end of the hood. 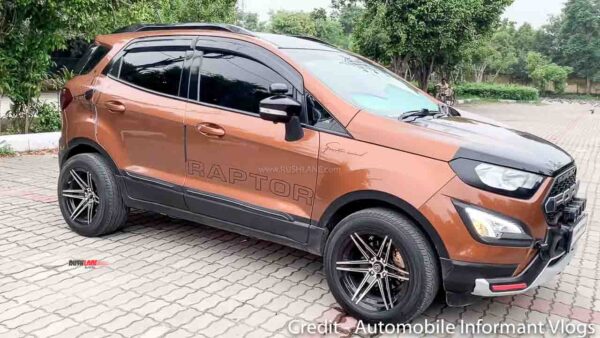 The F 150 Raptor from Ford is a high-end performance pick-up truck available in overseas markets. It employs a 3.5-litre twin-turbo EcoBoost engine that cranks out a healthy 450 bhp and 691 Nm of peak torque. Over the years, due to its stunning performance, the Raptor has gained cult status worldwide and hence the owner decided to add a Raptor badging to his EcoSport.

To speak of modifications, the huge ‘Ford’ engraving on the grille is an illuminated mod-set with LED lights inserted onto it which looks exemplary in the dark. Another noticeable mod-job is the addition of the fog light setup on the grille. The standard fog-light housing is modified as well with LED DRLs integrated into the new system accompanied by turn indicators. Plus the setup has been designed keeping the EcoSport in mind. 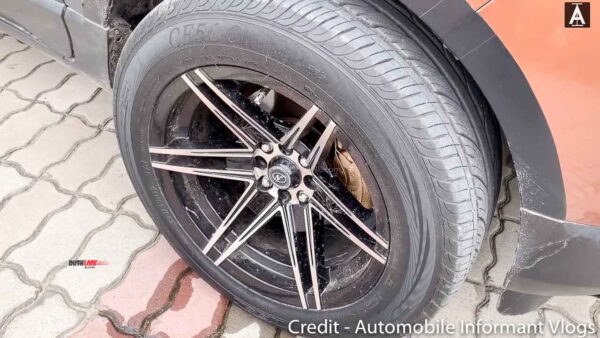 Another noticeable update is the net set of tyres. Although the rims are of the same 16-inch size it looks way bigger than they actually are. The 8-J concave rims are wrapped by a 255/55 R16 profile of tyres giving the look of all-purpose tyres. The rims are called concave since the spokes on it are directly connected to the wheel hub.

All in all, the wheels look much better than the stock ones. At the rear, the owner has used the standard tyre as the spare wheel due to the low availability of the custom made alloys. The shovel and axe added to cover the spare wheel don’t make much sense though. 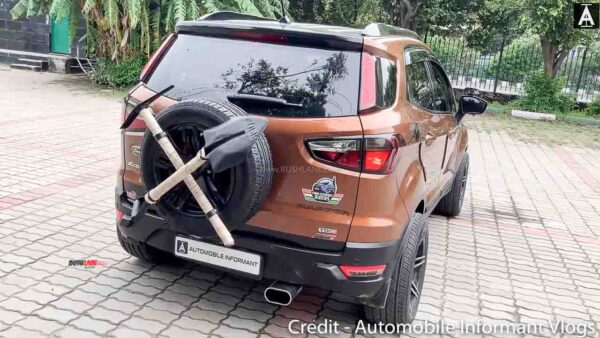 The roof also gets a glossy black vinyl finish which complements all the exteriors alterations. Also, the rear gets a new pair of pillar lights at the C-pillar and reflector lights which enhance the car’s visibility on dark stretches of road. The owner has added a faux exhaust tip just to amplify the sporty look.

At the interior, it gets a new Hypersonic Green Series made an infotainment system and an audio system with an amplifier installed underneath the front seats. The cabin also gets ambient lighting with different colour options. Seat covers are made of artificial leather and the cabin is highlighted with red accents over the seats, dashboard, central console and side-door panels. The matrix illuminated scuff plates give the cabin a premium feel.

The owner has revealed that the total cost of modifications done so far has stretched to almost Rs 2.5 lakh with more modifications in store in the coming days. Take a look at the full modified car in the video below.