Ford India has introduced a new fully-loaded variant of its Freestyle crossover-like hatchback ahead of the festive season. Called the Ford Freestyle Flair edition, the top-end trim adds several visual enhancements and additional features. The petrol variant is priced at INR 7.69 lakh while the diesel variant retails at INR 8.79 lakh (ex-showroom).

The Ford Freestyle Flair distinguishes itself from the regular variants by means of red and black accents on the outside as well as inside. The car sports black roof with contrasting red roof rails, black and red inserts on the front bumper and ORVM, decals on the lower part of the doors, and black alloy wheels. 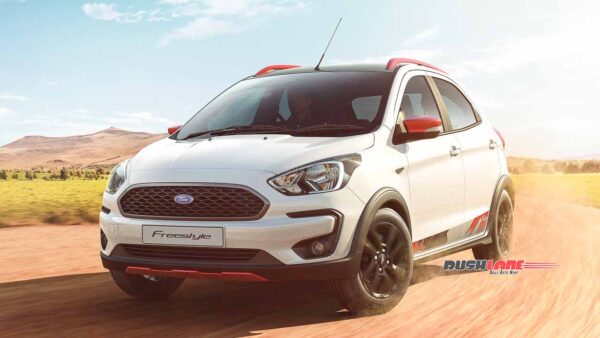 Ford also offers a one year ad-free subscription to Jio Saavn music streaming service if you book any variant of the Freestyle. The new top-end variant of the hatchback is equipped with six airbags and electronic stability program with anti rollover protection.

The Ford Freestyle Flair continues to employ the 1.2-liter naturally aspirated petrol engine and 1.5-liter turbocharged diesel engine. The former makes 96 hp and 120 Nm of torque while the latter has 100 hp and 215 Nm of torque on tap. A 5-speed manual gearbox is standard across the range.

Positioned below the Ford EcoSport sub-4m SUV, the Freestyle is essentially Figo hatchback with rough road package. It is one of the last model standing on its kind in the country. Competition comes from the likes of Maruti Ignis, Mahindra KUV100 and variety of hatchbacks.

As the festive season approaches, we expect to see more and more special editions and new top-end variants of existing vehicles. The auto industry has been going through a rough patch for over a year now and this festive season is expected to provide a small relief. Automakers are preparing to ramp up their production temporarily to cater to the spike in demand that is usually seen during the months of September to November.