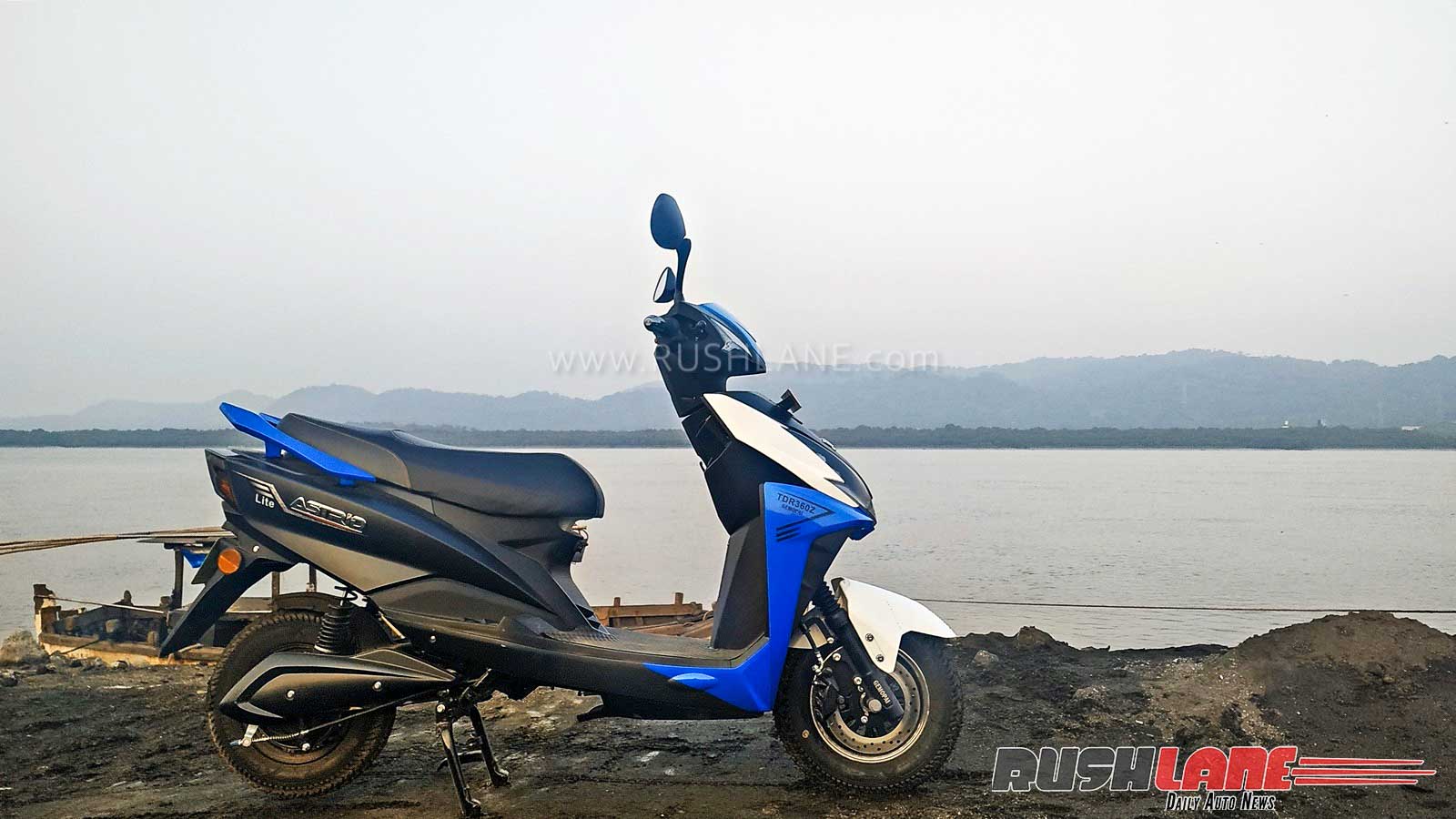 There has been an upward shift in the electric scooters market- not just on variety, but also in terms of styling. Gone are the days of hideous looking plasticky contraptions that would send your eyeballs into disarray.

Though not every scooter can match the stimulating design of the Ather 450- but most of them aren’t ugly anymore. And there are a few that look sleek and purposeful- the new Gemopai Astrid Lite happens to be one of them.

The Gemopai Astrid Lite is compact and thankfully doesn’t look much different from its petrol-powered counterparts. The design and the dimensions to some extent reminds us of the first gen Yamaha Ray. A joint venture between Delhi based Goreen E-Mobility and Opai from China- the Astrid Lite doesn’t vaunt on its Chinese origins. 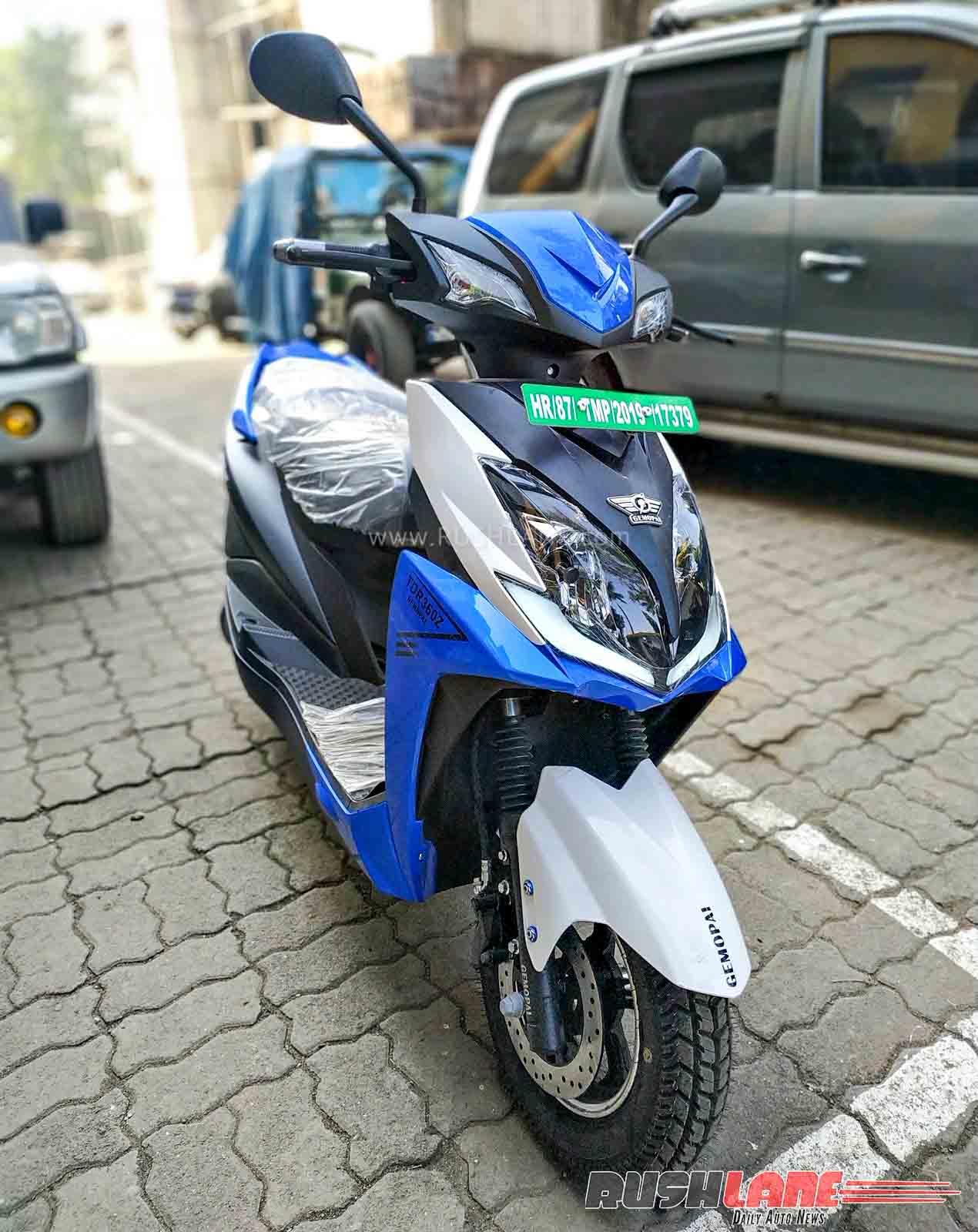 The twin-headlight setup does drop hints though and so do little enhancements such as the daytime running LED at the rear- but as for the rest there are no flashy or loud embellishments making the Astrid Lite a pretty scooter to look at.

Powering the e-scoot is a 1.8kW Lithium-Ion battery that claims to offer 80-90 kilometers on full charge in Economy mode. The battery weighs an approximate 8.5 kgs making it convenient to carry and charge via a regular charging socket taking 3.5 hours to go from E to F.

It can also be charged through an external charging port provided below the seat. The hub wheel motor is rated at 2400 watts which Gemopai claims to give the Astrid Lite a top speed of 75 kph in sports mode. Real world figures ahead. 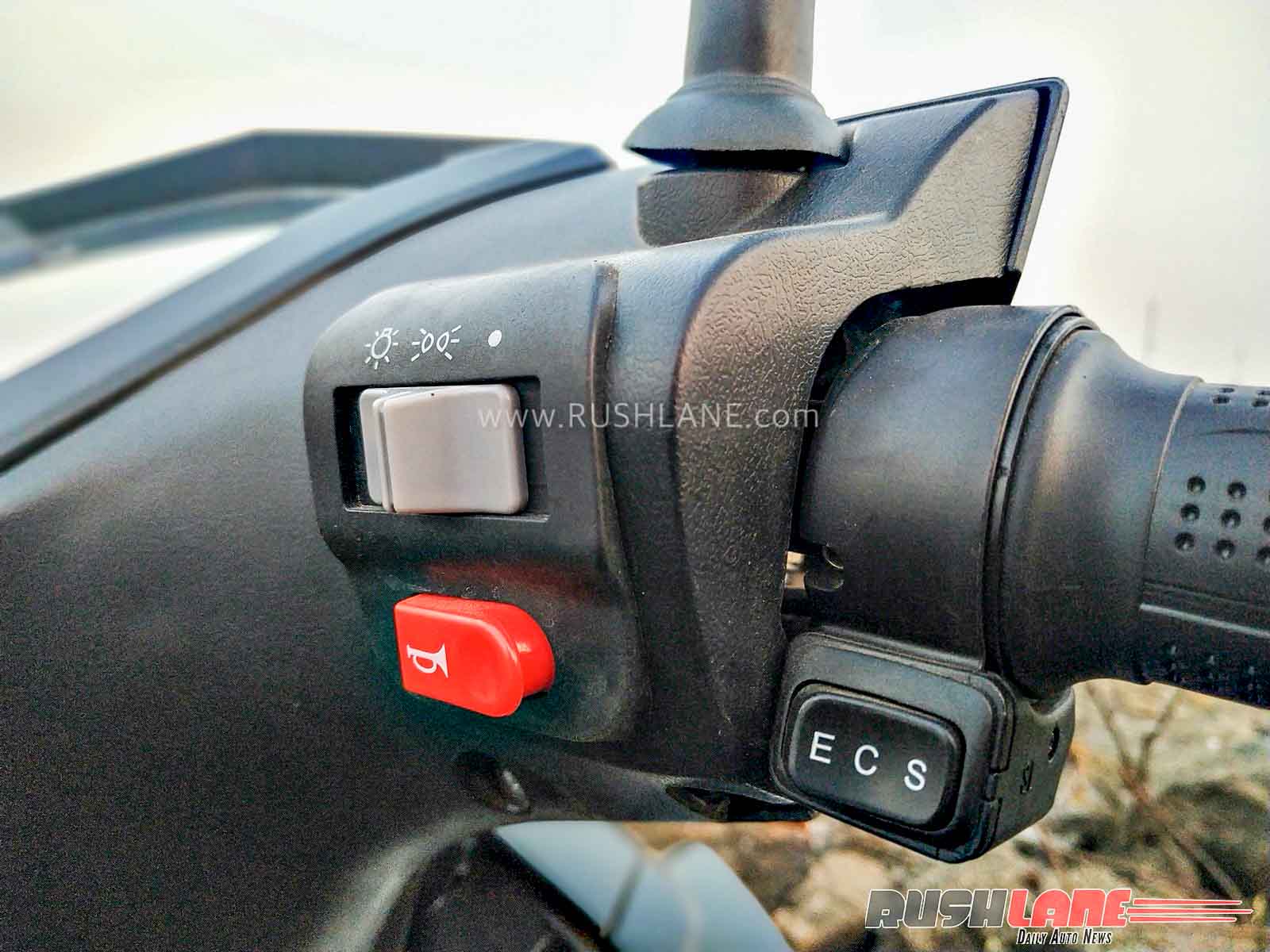 Performance wise we cannot argue on the fact that the Astrid Lite is indeed a zippy scooter to ride around in everyday traffic. It won’t blow your mind with its acceleration, but doesn’t disappoint either. Though we didn’t measure the acceleration figures, but we’d say that it’s pretty much similar to most of the 100cc scoots out there.

We were bombarded with questions from other scooter owners at the next stop light considering the Astrid Lite would zip away from the earlier one. Also there’s no substantial loss of power even during two up riding and the Astrid Lite pulls cleanly to its max grunt. 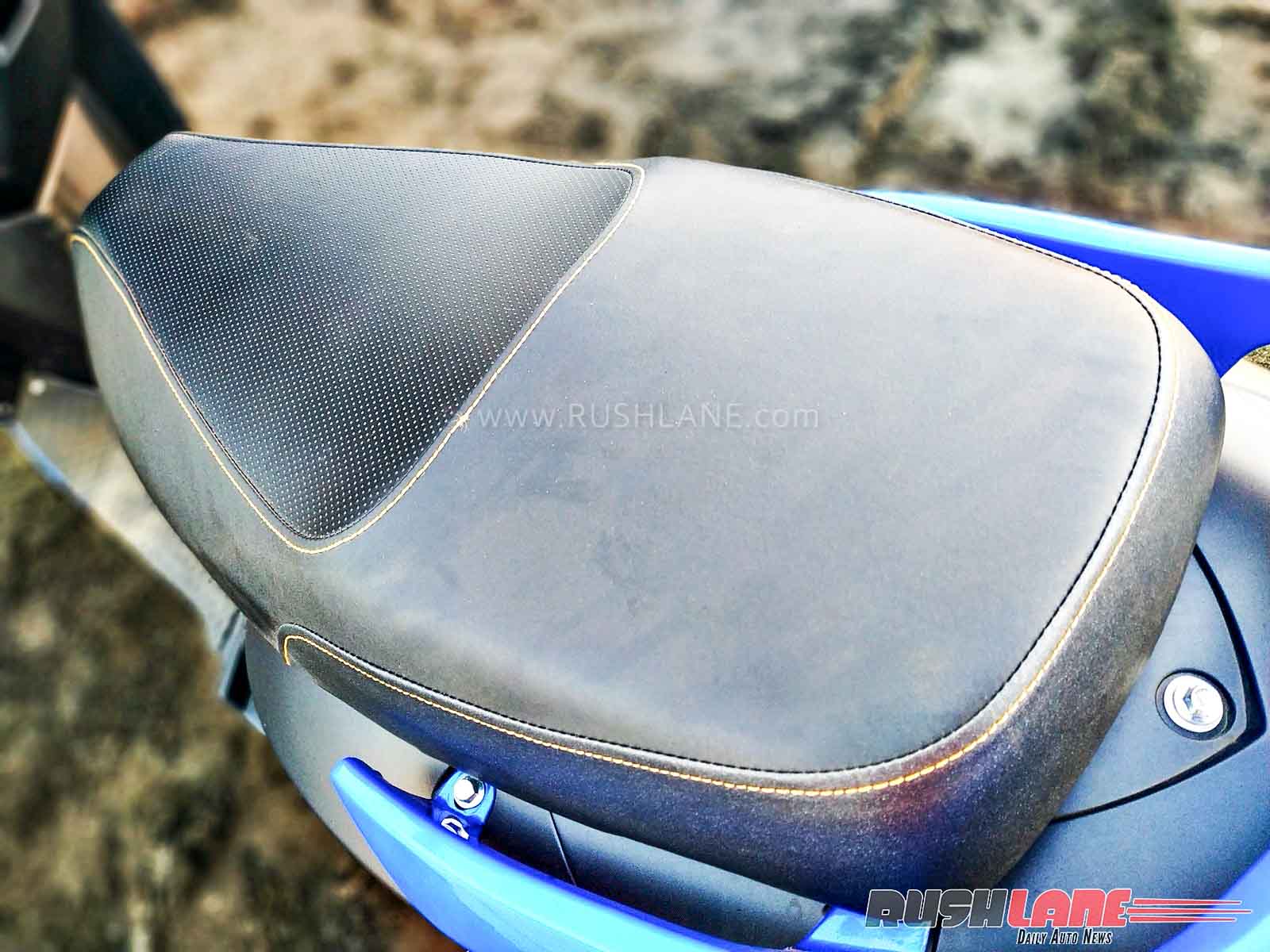 The seat and ergonomics are comfortable for an average heighted rider and the same extends for the pillion too. With the battery placed below the under-seat storage, it eliminates the odd squatted riding position as in case of scoots with battery placed under the footboard. The switchgear though well finished is placed further away for convenient operation for an average sized hand.

It’s tedious to operate the switches without sliding your hand off the grips. To add the handlebar grips have been given metal accents which might add to visual novelty- but takes away the comfort of your palms to some extent. Also the mode switch on the right side feels protruding and keeps hitting against the base of your thumb causing pain during extended runs. 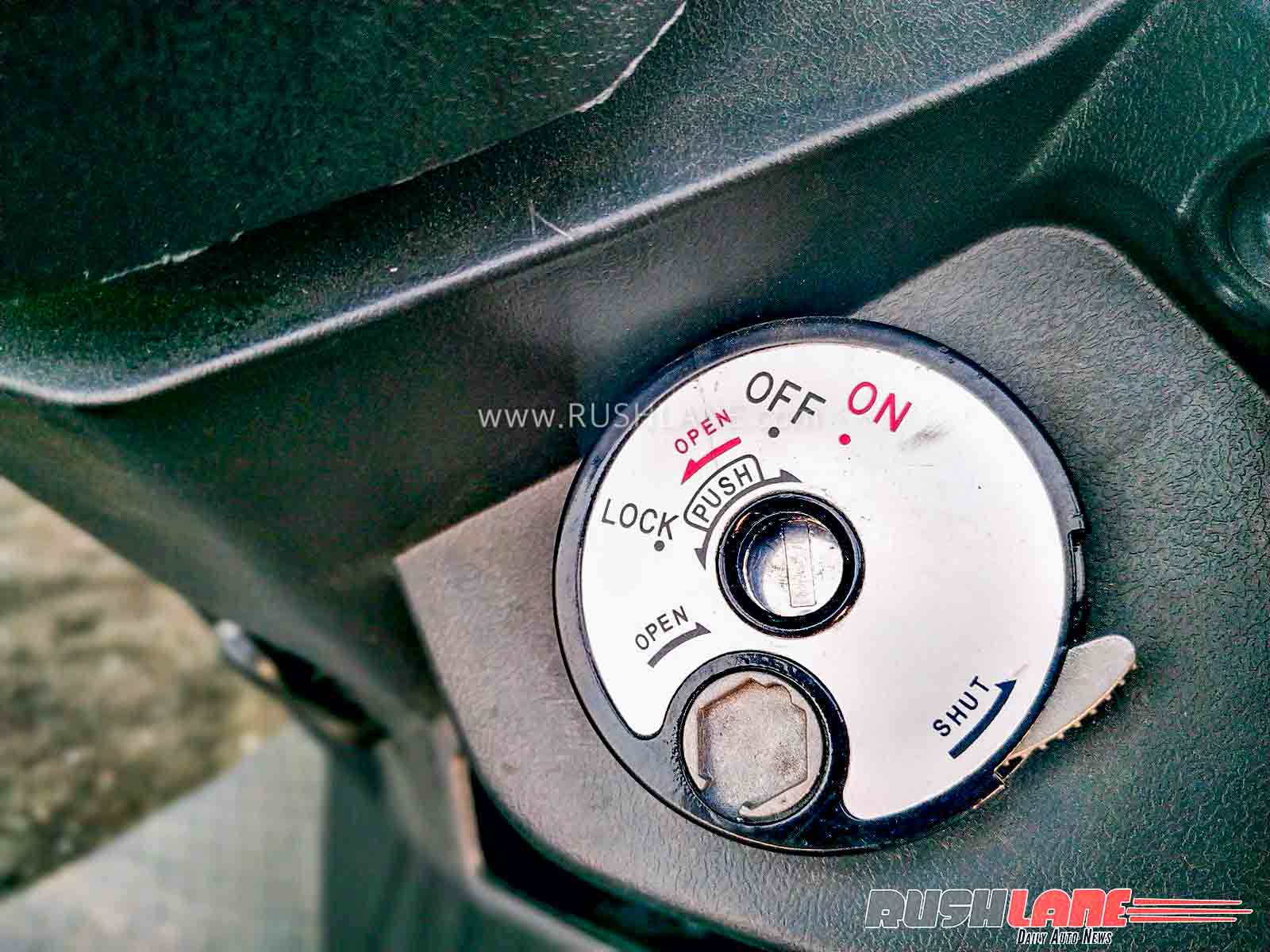 The Astrid Lite demonstrates decent road manners- however the front telescopic suspension feels stiff and short of travel. The twin rear shockers too impart a bouncy feel going over undulations and it’s only with a pillion on board that it starts feeling compliant. However we found it squeaking over bumpy surfaces which we assume to disappear with more usage.

Continental branded rubber at both ends offer adequate grip under cornering and hard braking. The front disc and rear drum brakes are well calibrated and offer ample bite bringing the Astrid Lite to a breezing halt. 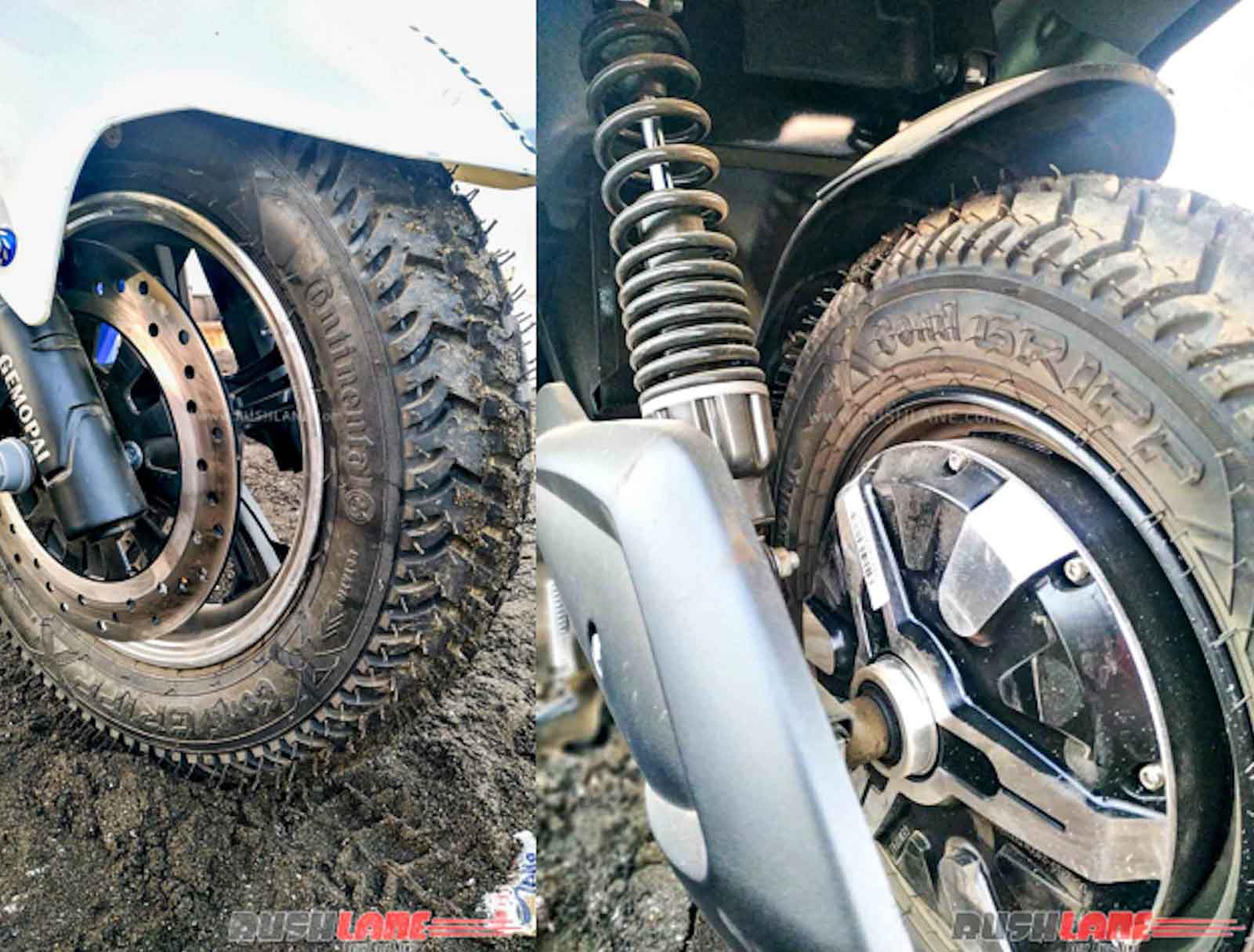 Talking of real world figures- we’d say the Gemopai Astrid Lite falls short of its claims. To start with- the dashboard provides for misleading and jacked up figures. The speedo error is humongous to the extent that we managed to surpass the claimed top speed figures clocking 76 kph on the dash- which turned out to be 50 kph on the GPS.

We slowed down the scooter showing 60 kph while the GPS showed 37. Also we ran out of battery power at 80 kms which in actual was measured to be 53. The scooter was ridden in sports mode most of the time and though we’d not complain on the actual range- but the variation between displayed and actual figures left us disappointed. We’d say if it was an error specific to our test ride unit- then Gemopai should look to get it fixed at the earliest. 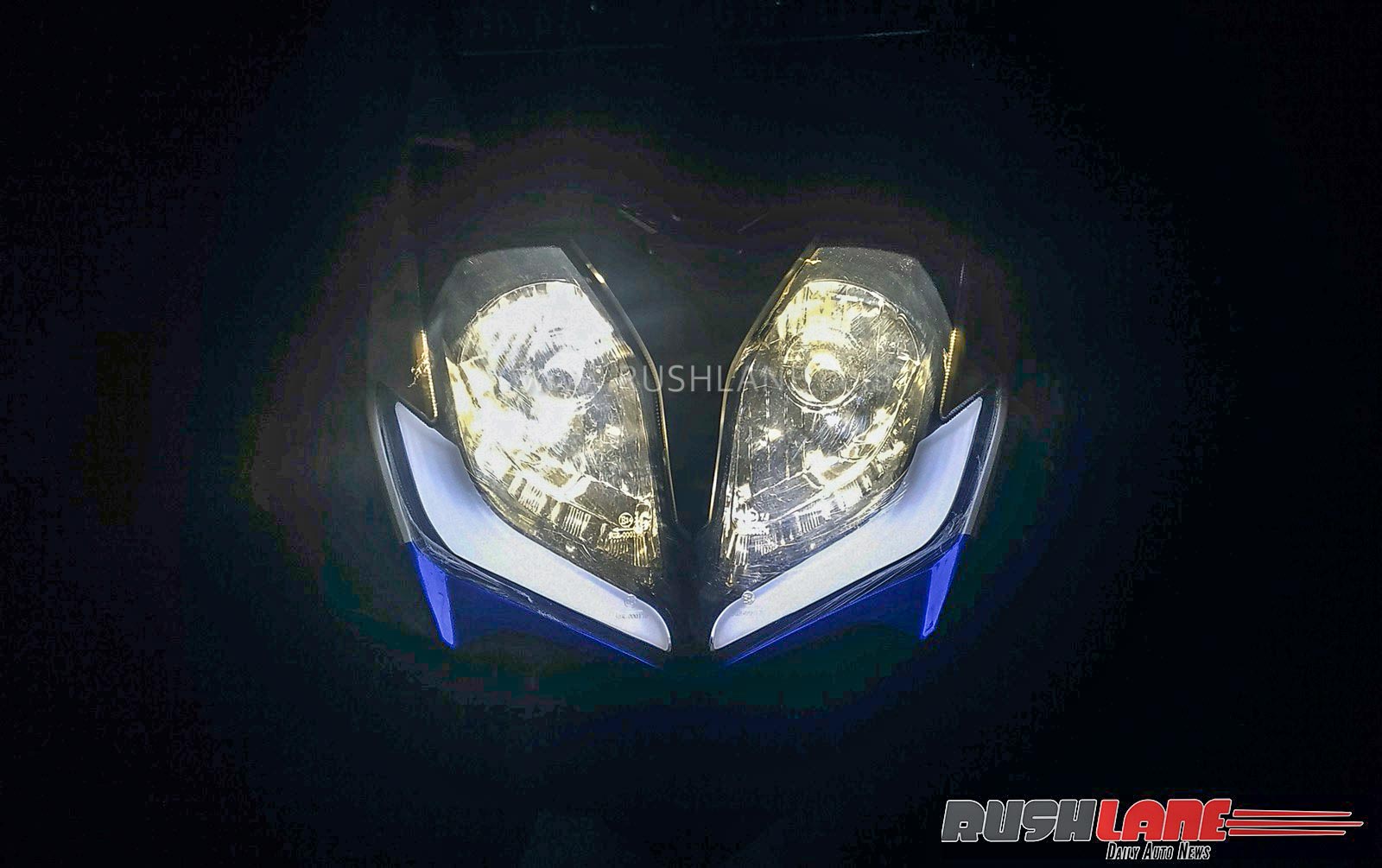 To add, the twin headlight setup isn’t much to write home about and offers average illumination for a few meters. So if you’re thinking of going around on the Astrid Lite in poorly lit conditions- we’d strictly advise against it. The under-seat space offers ample space for grocery shopping or can swallow a medium sized helmet.

The two cubbies at the front offer small storage space and a USB charging port. There is also a bag hook to take some weight off your shoulders and a rubber mat has been provided over the footboard. The ignition slot comes with a shutter to refrain miscreant damage while other features include side stand sensor, keyless starts, anti-theft alarm and rear wheel immobilizer.

Overall – the Astrid Lite impressed us with its build quality and comes across as an uncompromised well put-together unit. The charging system is convenient and you would love the scooter if your commute is short and marred by traffic jams. The Astrid Lite would squeeze between the tiniest of gaps and the electric motor offers enough zip for that added dash of fun. It’s comfortable while scoring merit on handling and braking. Only if the erroneous figures could be rectified.