Following stern warnings from the High Court of Gujarat to the respective authorities in the state, has resulted in some very stern action by the police and municipal authorities at the ground level. From getting one of the most popular club to mowing down one of the oldest roadside eateries, the city of Ahmedabad is witnessing a huge change – as far as the traffic scenario is concerned.

The popular club was sealed by the govt because most of their guests used to park their cars on the road, as the club did not have enough parking. So the authorities decided to seal the club premises until they manage parking spot for their members.

Shopping malls too have been questioned as to why do they collect parking charges from visitors. Since then malls are not allowed to charge parking fees from visitor, no matter for how long they decide to park the vehicle.

Rickshaw wallas too have been taken to task. No more will you see them together, parked on the roadside and chilling. These clubbing of rickshaw waalas on the side of the road used to take up public space and cause traffic jams. So they are also being fined. To retaliate this, rickshaw union observed a 1 day bandh in the state.

One of the oldest and the most popular roadside eateries which thronged the area near Law Garden, have been wiped off from the face of the planet in a matter of few hours.

Citizens are being fined for parking their cars / bikes on the road. Almost every corner of the city has a cop on duty who makes sure that there is no one who has parked their vehicle illegally. And if there is a vehicle, they are fined right away. But this has an adverse effect as well, as mentioned by Ahmedabad resident Sudeep Chakraborty. 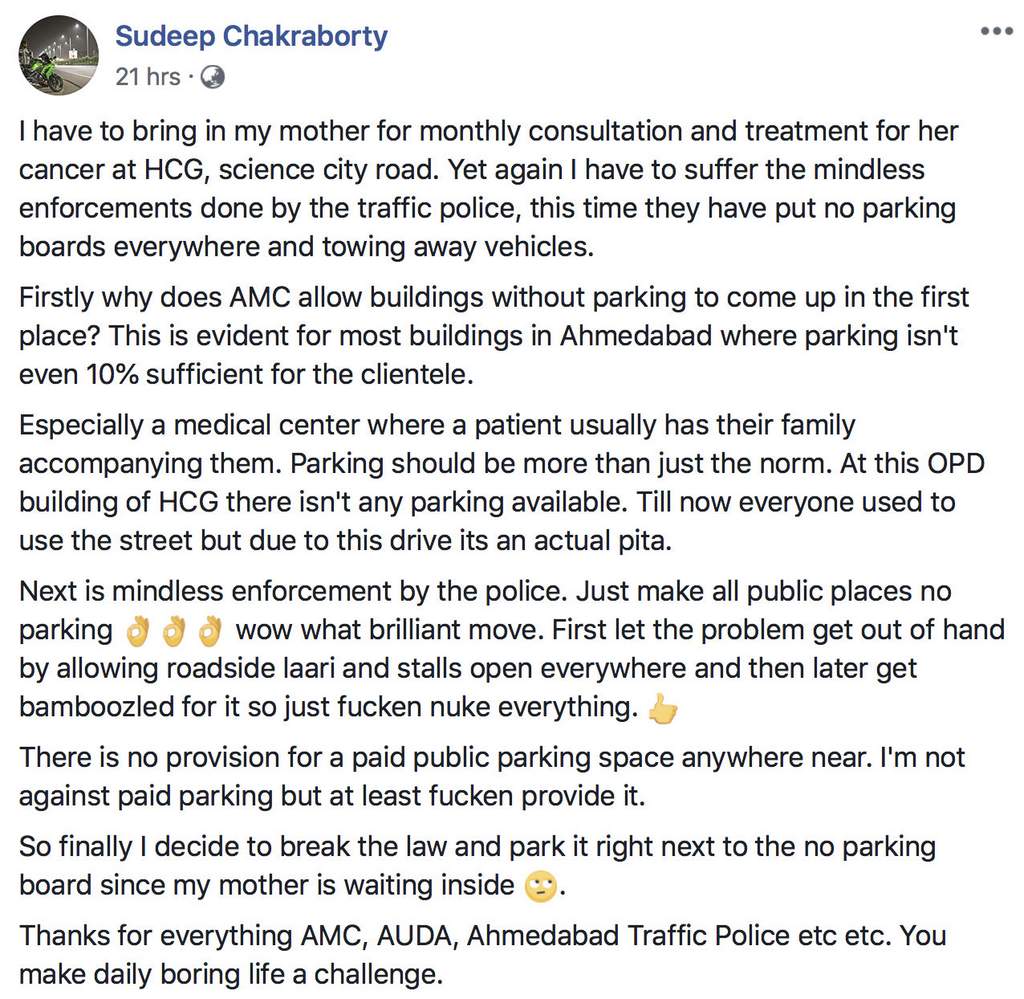 Next up, the state is now planning on implementing one vehicle per person rule in the state. All this is being done to reduce the traffic congestion and pollution. Citing section 33 of Gujarat Road Safety Authority Act, 2018, the Gujarat Commissioner of Transport has directed RTO authorities to furnish details of persons owning more than one vehicle.

Though the passing of this regulation had also come up earlier, it was delayed but considering the heavy load of traffic on the streets along with high levels of pollution, its implementation has become necessary.

This will be possible only by making amendments in the Gujarat Road Safety Authority Act of 2018 or a Government notification can be issued under Article 33 of the same act. RTO authorities have been asked for seeing into how cancellation of registration of scrapped vehicles can be implemented.

Such regulations are already in place in states like Delhi and it is hence being considered for Ahmedabad too. It is yet to be decided whether to bring all kinds of vehicles under this rule or to restrict the ban only to transportation vehicle.