Harley Davidson has gone on record more than once to confirm that it is working on a small displacement motorcycle which will have emerging markets like India as its primary target. The American cruiser specialist has even revealed that it has enlisted an Asian two wheeler maker as its partner to manufacture the compact model in a cost effective manner for global consumption.

An excerpt from a presentation which summarizes Harley Davidson’s road map till 2027 has emerged online. The document reveals that, in the next several years, Harley Davidson will be launching as many as hundred motorcycles (yes, you read that right) across existing and new segments.

The most interesting items as far as our market is concerned are the middle-weight platform and the small displacement motorcycle. As of now, the smallest and the most affordable Harley Davidson is the Street 500 which is not sold in India but is made in Bawal, Haryana, for several international markets. So, it is reasonable to assume that the small displacement motorcycle that the company is referring would be in the 250 – 500 cc range. 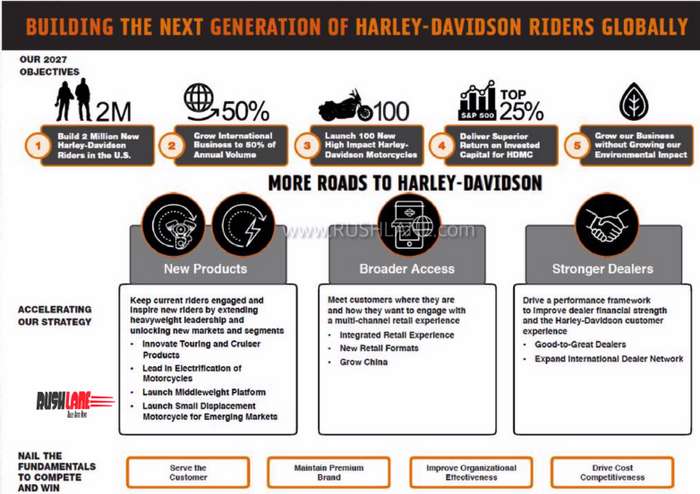 Matt Levatich, President & Chief Executive Officer, Harley-Davidson, stated that the company is just over a year away from launching its small capacity motorcycle. HD is hoping that its most affordable model would provide access to millions of new customers in Asia. There is a high likelihood that the Asian partner that Harley Davidson is so tight lipped about is an Indian firm.

Harley Davidson is not forthcoming with the details of its small motorcycle yet but if we have to bet we would put our money on a sleek cruiser with a displacement of around 250 cc. The brand is likely to retain its premium appeal by sticking with its tradition of V-Twin engine configuration rather than opting for a low-cost single-cylinder unit. We expect the power output to be in the vicinity of 30 hp with ample torque on offer.

As far as branding its concerned, HD could either come up with a new nameplate altogether or use the well established Street branding. A made-in-India compact Harley Davidson quarter liter cruiser with a price tag of around INR 2.5 to 3 lakhs has the potential to change dynamics of the segment in its favor. The segment is currently lead by Royal Enfield, with over 80% market share.