In July 2020, the manufacturer handed over 100 units of Destini 125 and Maestro Edge 125 for women police officers in the UP Police dept. The trend sees Hero carry out such activities at regular intervals across police departments in the country.

Number of vehicle handed over thus far exceeds 3.5k units. Project Sakhi CSR activity is tasked with bikes handed over specifically for women coppers. In most instances, stock bikes are slightly tweaked in regard to accessory packs and fitment to ensure coppers are able to accommodate all they need when doing the rounds. Special police stickers are added to visible areas of the bikes. 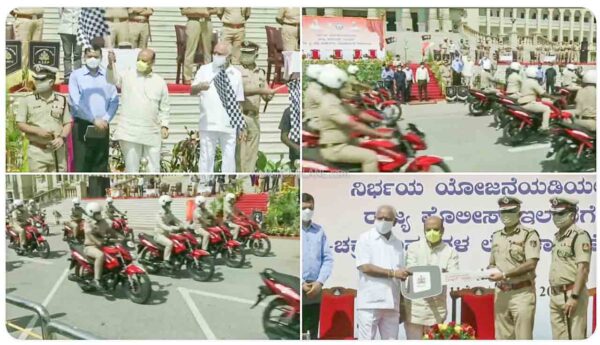 This festive season has been a busy period for Hero MotoCorp with the company having reported its highest wholesales to date. Wholesales is reported at 8,06,848 motorcycles and scooters in October 2020 at 34.64 percent sales growth up from 5,99,248 units in October 2020.

The two-wheeler manufacturer finds its large buyer base in its large motorcycle range of which Splendor leads by miles. Domestic motorcycle wholesales accounted for 7,32,492 units last month. The month prior, the brand reported 6,60,948 units.

This upward graph will certainly help consolidate Q4 2020 quarter to help Hero end the year well. For the same month, FADA Research reports retail sales at 3,33,563 units with the exception of about RTO data from AP,MP,LD, and TS.

The CSR activity is specially designed to aid Covid-19 relief efforts. The custom built Xtreme 200R motorcycles in use are equipped with a full stretcher with foldable hood, medical equipment including detachable first-aid kit, and oxygen cylinder, and a fire extinguisher. To ensure these vehicles are given a free pass wherever possible they’re fitted LED Flasher lights,a beacon light, an emergency wireless public announcement system, and siren.