Hero Karizma modified into a scrambler – Meet the Katalan 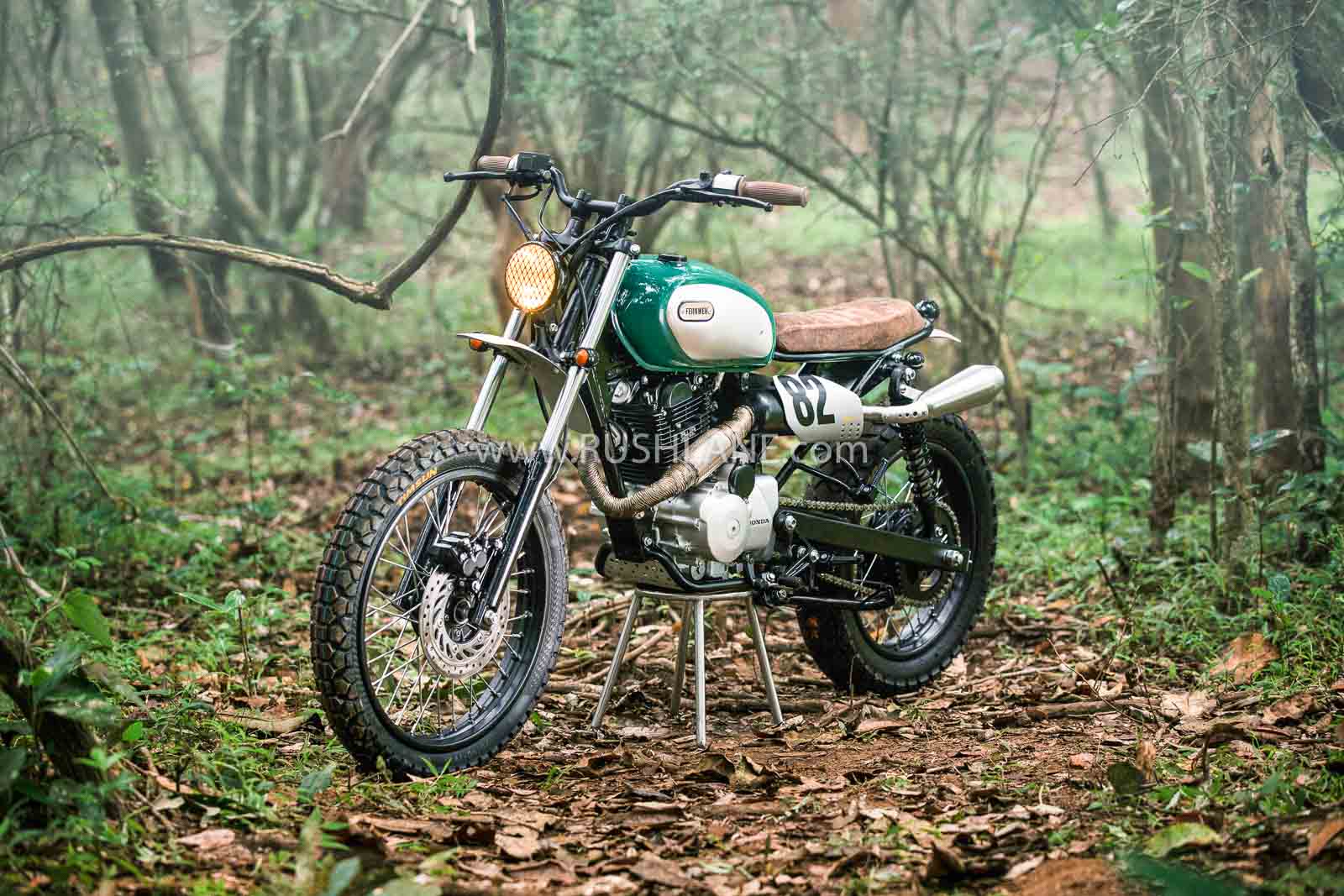 Indian motorcycle enthusiasts can never forget the iconic Karizma R from the good old Hero Honda days. After the joint venture between Hero Cycles and Honda Motor Company saw its closure in 2010, the Karizma R (along with its fully-faired sibling, Karizma ZMR) continued in the newly-formed Hero MotoCorp’s product portfolio for a few more years. Tight competition and the decreasing desirability due to arguably bad aesthetics (of later generations) and outdated equipment were the primary reasons for its eventual discontinuation in 2017.

The original Hero Honda Karizma R still finds a lot of takers in the used-motorcycle market. Finding a clean example is really hard and most of them are seen as salvage motorcycles for parts and scrap. Another trend observed in recent times is swapping the Hero Impulse with the Karizma’s Honda motor. 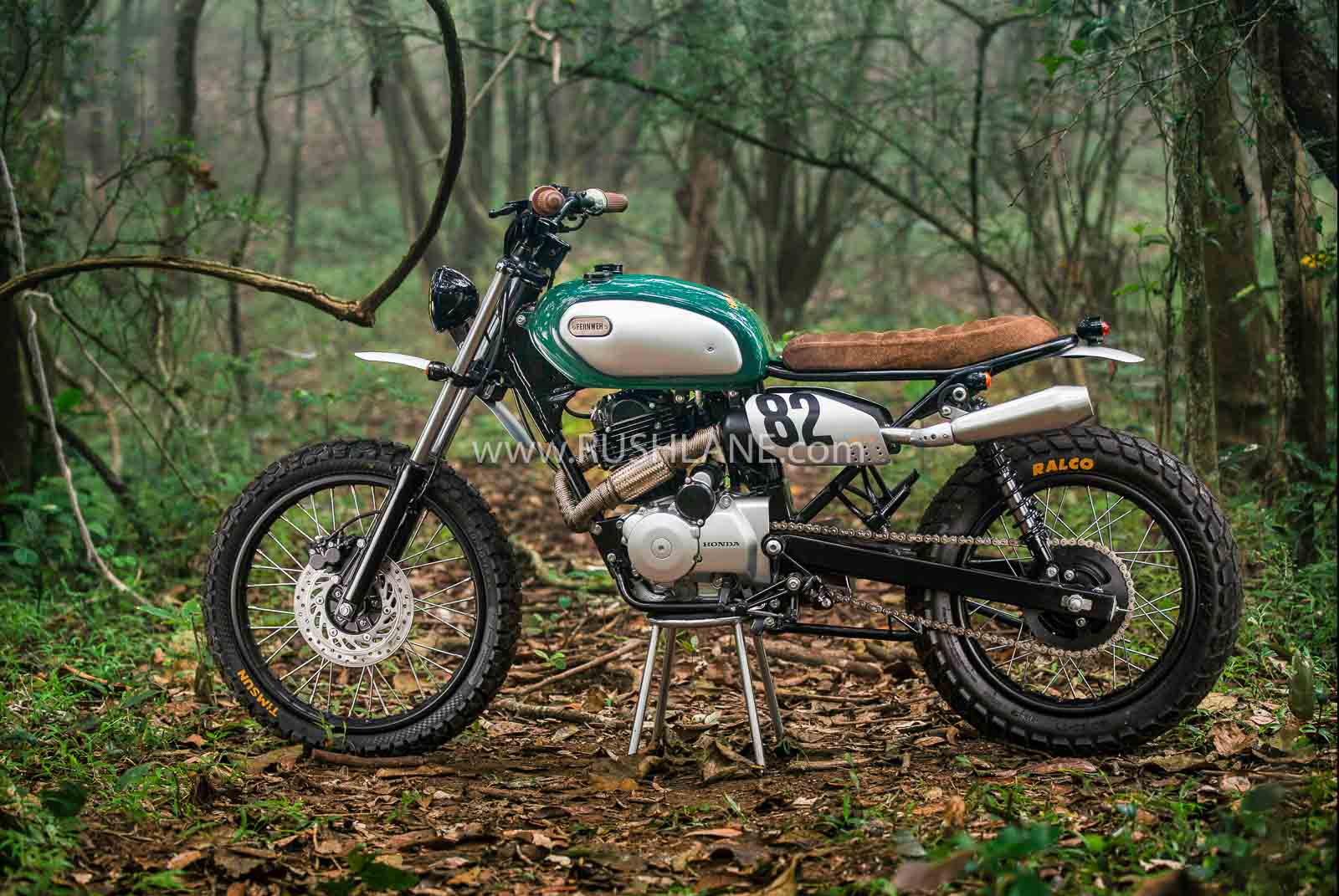 Some unlucky ones end up at talentless customisation shops and garages only to become abominations on two wheels, or simply, a piece of junk. However, a few examples get a ray of hope by reaching the hands of proper motorcycle builders who know motorcycles and the art of riding. Here’s one such example — the Katalan (“kaa-ttaa-llan”) created by Mohamed Adhil from Calicut, Kerala.

Mohamed sourced a 2012 Karizma R; stripped it down to the bare bones; tried out his best at design and engineering, and; made a stunning scrambler out of the old Hero Honda faired sports motorcycle. Mohamed Adhil did the Katalan build for a friend of his. Even though he has undertaken a lot of motorcycle works in the past, the Katalan is his first full build. The design and fabrication were mostly done at his backyard, with basic tooling. 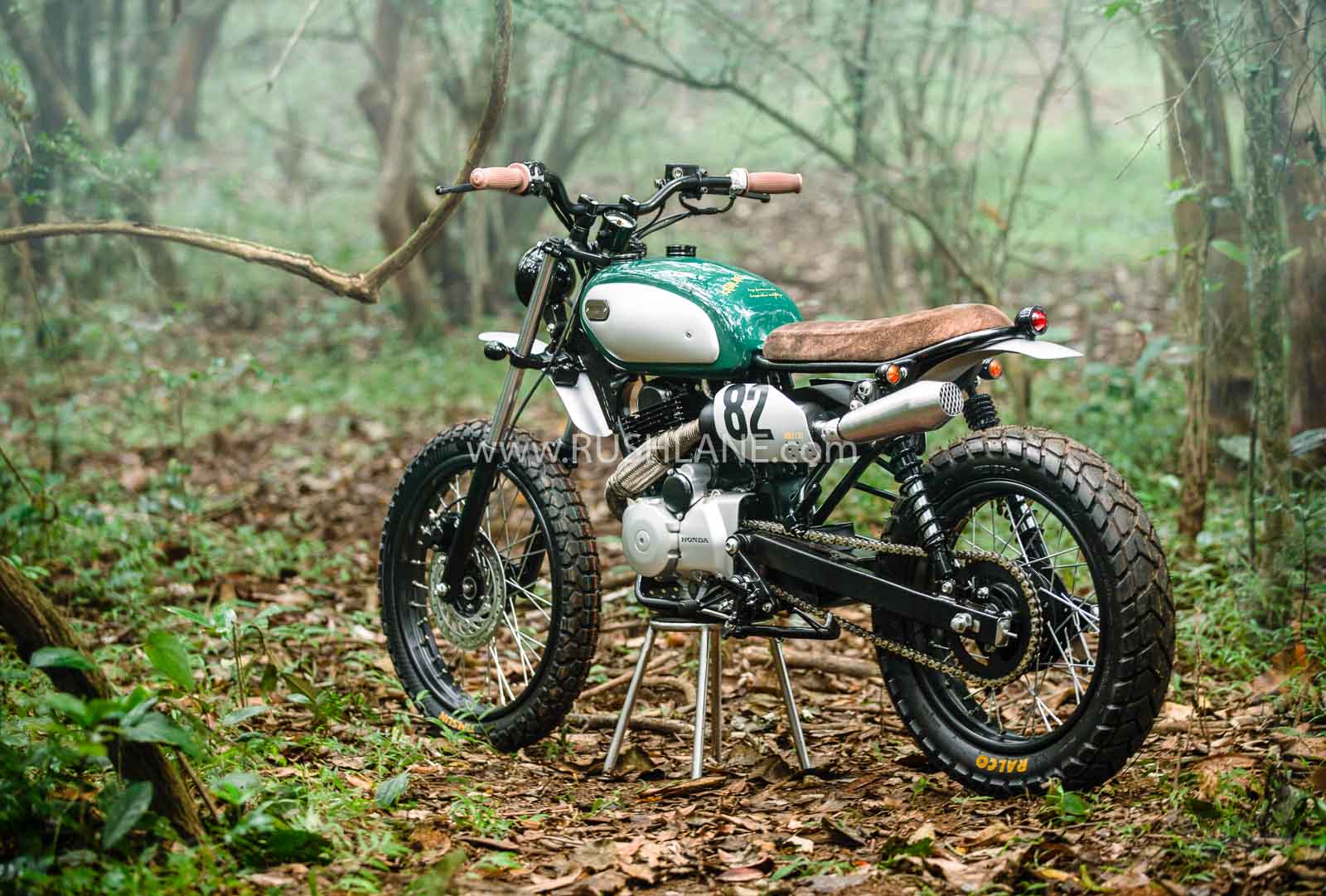 In Malayalam, the word “katalan” stands for ‘hunter born in the wild’. The inspiration for this name came from the motorcycle’s Dark Forest Green paint job and hand-stitched tan suede leather seat, alongside its off-road and rugged trait. The paint looks remarkably similar to the iconic British Green shade and goes well with the satin panels and subtle yellow highlights.

It took a good two years for Mohamed to complete the project. The build was no easy job and Mohamed learned a lot from the mistakes he made along the journey. The primary aim was to bring the build to international standards while keeping it as mainstream as possible, even though scramblers are still a rarity in the affordable side of the Indian motorcycle scenario.

One might develop a misconception that a scrambler is just a stripped-down abuse-friendly motorcycle design than can be taken anywhere. However, the design efficiency of a scrambler revolves around function (ideal rider triangle) and proportion (maximum compactness). Most importantly, it should be visually simple and clean (not ‘garage-queen’ clean).

The original 223cc air-cooled single-cylinder motor was given some essential maintenance and still remains stock in order to maintain reliability. In its best shape, the engine is good for 19.2bhp and 19.35Nm of torque. Performance of the Katalan could be better than the donor Karizma R due to a higher power-to-weight ratio. The transmission is the same 5-speed unit. The engine is protected from every adventurous ride by a hand-made heavy-duty bash plate.

The top-mounted stainless steel exhaust was entirely built by hand, with the inclusion of two mufflers; one of which is neatly blacked-out and hidden behind the stainless steel side panel with ‘82’ written on it. To go just a step ahead in giving a certain character to the motorcycle, Mohamed used a flex pipe (commonly seen in four-wheelers) towards the rear section of the exhaust to shake it a bit while the Katalan goes over rough terrain.

The intake system, on the other hand, gets a fully fabricated airbox perfectly concealed within the side panel. In comparison to a conventional open-pod filter, this setup ensures cleaner and smoother functioning of the engine. An open-pod filter may look and sound cool, and could even give a sense of better engine performance, but has limited filtering capability.

The Katalan obviously rides way higher than the Karizma R and Mohamed plans to change the front forks for the ones from the Hero Impulse, to bring up function over form. There’s no centre stand either. The original footpegs and gear lever have been changed for more rugged alternatives.

The scrambler rides on 90/19 and 120/17 knobby tyres at the front and rear, respectively. In comparison to the stock sprocket, the Katalan has two additional teeth for better acceleration and more sideways action over loose terrain.

The new fuel tank has definitely bumped up the cool factor. However, Mohamed had to go through a lot of pain to fit it perfectly with the chassis without any chance of a fuel-line failure. The final result was worth the hard work and the fuel tank boasts of a compass as well. The single-pod instrument console accentuates the scrambler’s simplified and rugged character. The switchgear panel is now finished in brushed aluminium.

Again, to add to the scrambler character, the starter and kill-switch were moved to the side of the motorcycle. The wiring was shortened significantly and rests mostly under the fuel tank. The battery has been moved down towards the swingarm and is hidden from view.

Mohamed Adhil shares that the list of changes done to the donor Hero Honda Karizma does not end here, but will keep on growing. The Katalan is, in every way, a pure motorcycle art with no compromise in function in a bid to get an appealing form. Finally, massive props to the photographer who captured these images in an environment which defines the Katalan.