Hero MotoCorp is in the process of updating its range of bikes and scooters to comply with BS VI emission standards ahead of the 1st April 2020 deadline. The Splendor iSmart 110 is the first two wheeler in the country to receive the BS VI certification from International Centre for Automotive Technology (ICAT).

This BS VI compliant Hero Splendor has been developed in house at the company’s R&D facility, Center of Innovation and Technology, in Jaipur, Rajasthan. Hero MotoCorp is commenced deliveries of this advanced motorcycle to dealerships for training and familiarization purposes. 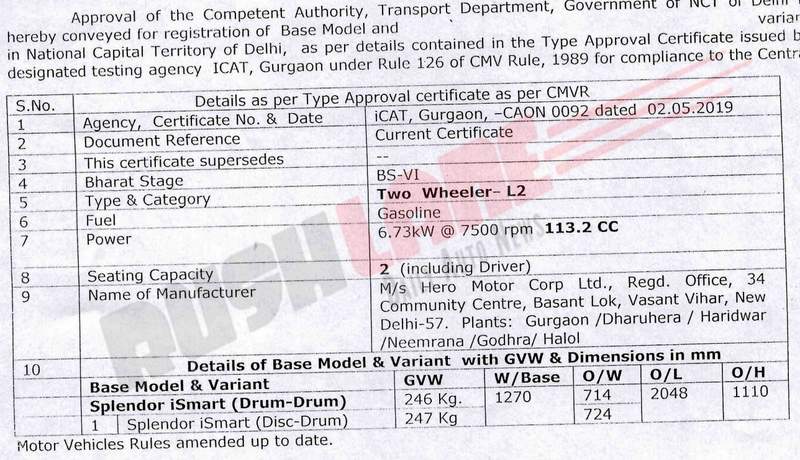 The new Hero Splendor iSmart BS VI will launch sometime later this month, when it will be offered in two variants of drum and disc brake. The updated model will be seen in identical dimensions with the disc brake variant being around 1 kgs heavier and 10mm wider.

In terms of pricing, the BS VI Hero Splendor iSmart will be priced higher by around 10-15 percent as compared to its BS IV counterpart which currently carries a price tag of Rs.56,280. Hence the new pricing should be around Rs.66,000.

The BS VI compliant engine will be an 113.2cc single cylinder, air cooled engine offering 9.15 hp power at 7,500 rpm as against 9.5 hp peak power offered from its earlier 109.15cc BS IV compliant engine. Though peak power is marginally lowered, the new engine offers fuel injection technology and comes in with i3S technology – Idle Start and Stop System which turns off the engine during long halts and restarts the engine once the clutch is released.

This comes following the reduction of corporate tax rates while the company has also announced special festive discounts so as to clear out BS IV stocks from company showrooms prior to the deadline. Hero MotoCorp has also introduced offers to support dealers by increasing their credit limits and offering support during the festive season which could result in increased sales.