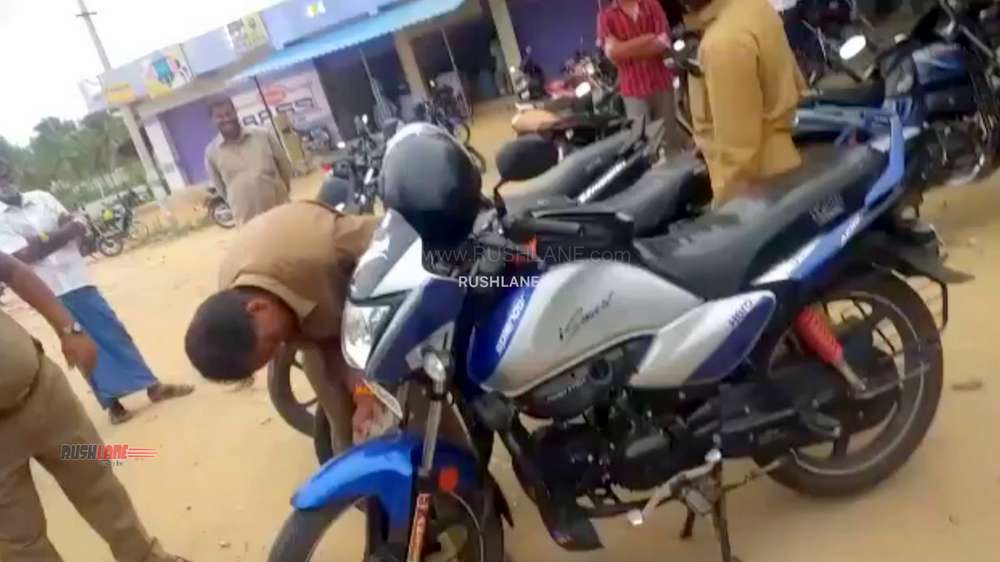 In an undated video clip in circulation one can see aftermarket lights on bikes being dealt with. Making an example of a Hero Splendor iSmart apprehended by the coppers, one can see a rather crude approach when it comes to removal of aftermarket LED lights.

The removal of the aftermarket fittings is a public show with the officer getting help from a few folks gathered around. Banking on a rudimentary approach, stones from the site are gathered to break away at the fittings.

But of course they’re going for complete demolition. So once, the fittings have been pried away from the bike, the owner is given the owners of breaking them down further. A largely nonchalant group of passers-by appear to have gathered to give the occurrence some air of importance. The group gathered, appears to comprise of quite a few folks in uniform, pointing to a bus depot ambience.

In translation, the officer isn’t too happy with the first half hearted attempt to break the fittings. He also gives a verbal notice to the bike owner stating the bike number has been noted, and there should be no attempt to refit illegal fitments. The owner had in his defence mentioned that his younger brother had fitted the lights. Looking at the uniform, the officer does may not not be from the Traffic Police department, as the same has a uniform which with white shirt.

While illegal fitments are branded illegal, and warrant a fine and removal, there has until date been no clarity on how this removal is to be carried out. Looking for stones, though prudent can’t be a solution as they aren’t available everywhere.

And it’s largely an outdated approach, which may not always bear result. There’s also a great chance that all that banging, will in varying degrees destroy the frontguard, and maybe other bike parts too.

When it comes to removal of disallowed fitments, are officers supposed to confiscate a bike and transport it back to a yard where such add-ons can be safely removed. There’s also the question of disposal of all confiscated material as you’re going to get flak for throwing plastic bits in a public dustbin.