A total of four people lost their lives while eleven were seriously injured when a 40 foot high hoarding, mounted on an iron frame was being dismantled. Ironically, the hoarding was being removed as a precaution in case it fell. Permissible height of hoarding in this area are 20 feet while this hoarding was of 40 feet.

The incident occurred at the Shahir Amar Shaikh Chowk in Mangalwar Peth area. Chaos ensured and traffic was disrupted following the incident while the injured were removed to the Sassoon Hospital. The crash also saw a total of 6 auto rickshaws, 2 two wheelers and a car get damaged as the hoarding fell on them. 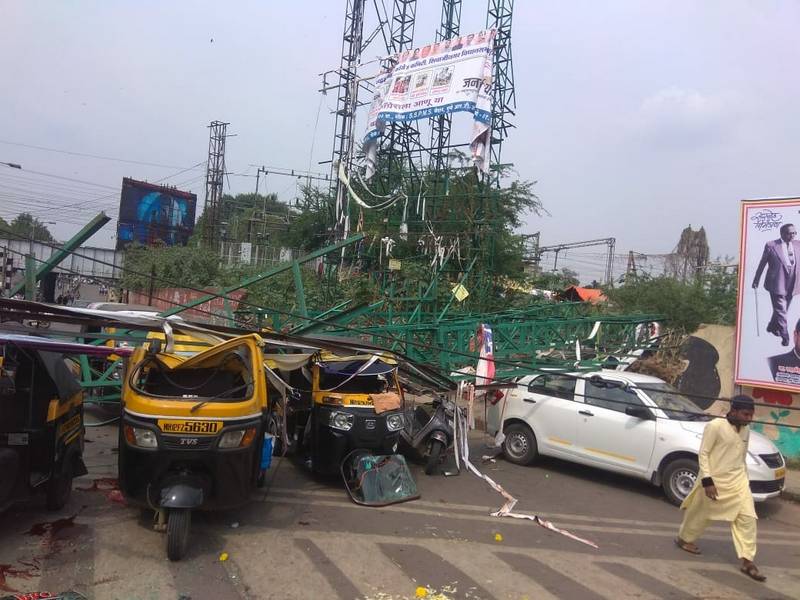 The injured have been identified as Shivaji Devidas Pardeshi 40), Bhimrao Gangadhar Kasar (47), Sham Rajaram Dhotre (48) and Javed Misabuddin Khan (49). The hoarding is owned by the Railways and is installed on the Railway premises itself. It was being dismantled at around 2 pm by a contractor hired by the railways as the said contractor who erected the hoarding did not follow instructions to strengthen the structure on the RTO side.

The contractor also refused to remove the hoarding and hence the Railways took it upon themselves to do the needful. The Railways have ordered a high level committee probe into the incident and while the blame game continues, the DCP Pune Police state that the negligence seems to be on the part of the contractor.

A case of culpable homicide not amounting to murder was registered under IPC Section 304 (a) against civil contractor Mallikarjun Malkapure and sub contractor Jivan Mandhare, while later in the day the Railways announced compensation of Rs 5 lakhs for those who lost their lives in the incident. Rs 1 lakh will be paid to those who have been seriously injured while INR 50,000 has been sanctioned as compensation to those who suffered injuries.

Latest update on the investigation – “Police have arrested Deputy engineer of Railway and his assistant in connection with flex hoarding collapse incident in Shivaji Nagar that claimed lives of 4 people & left several injured yesterday.”