RUSHLANEDAILY AUTO NEWS
HomeBike NewsWhen you're in the business of selling Honda Activa but Game of... 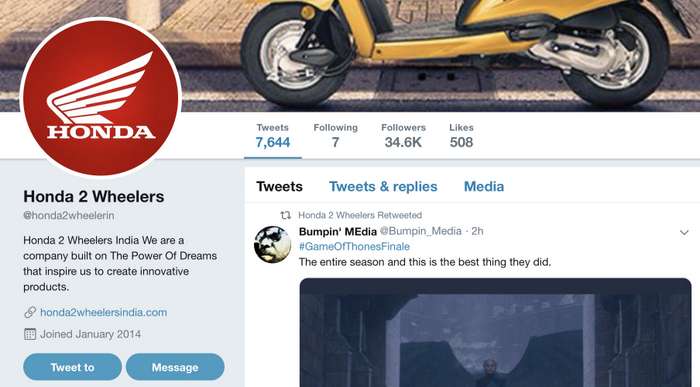 For all who’ve spent hours deliberating in anticipation just how GoT would conclude in its televised avatar, well, the end is here. And while there are countless alternative suggestions to how the series ended, Honda 2 Wheelers India found some to be more agreeable than others, at least for a bit.

A tweet by LandoMak found itself in favour with Honda 2 Wheelers, and read as follows – ‘-Bran is king of 6 kingdoms – Sansa is queen of the north – Jon is king beyond the wall – Arya is Dora the explorer.

Well, at least the series didn’t murder anymore Starks, and where they stand today would have made Ned mighty proud. The other tweet in favour had more to do with cinematographic excellence and points to a front shot of Dany with Drogon’s outspread wings behind her. That tweet reads as follows – ‘The entire season and this is the best thing they did.’ 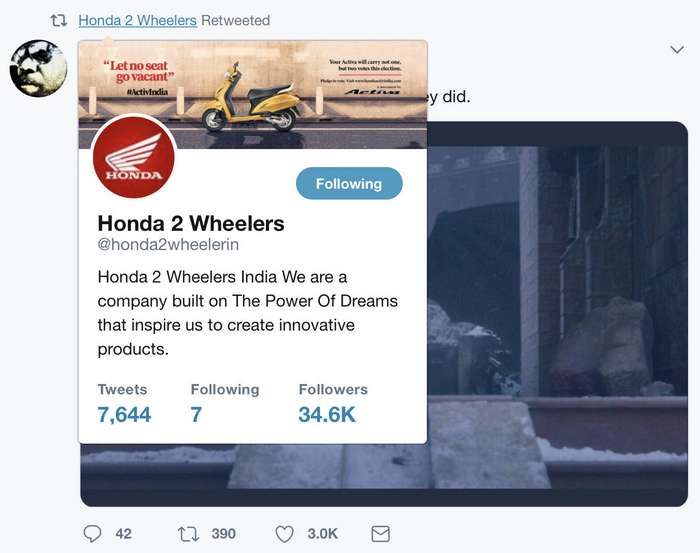 But it seems like viewer despondency crept back in, and the retweets were soon done away with. Well it may just not have been the best takeaways on second thought, and that’s why they were axed. Either way, we feel you viewer.

Or as has been seen on multiple other accounts, someone didn’t switch to their personal account, and accidentally retweeted their personal tweets from the Honda 2 Wheelers Twitter handle. Either way, we feel you.

For all its grandeur and uncertainties, GoT has ensured seasons of devoted viewership, and like all great things, had to come to an end. Of course such a hurried end may not have been the best ending, but that’s what we get, at least for now. For those who’re holding out on theories, well, the book series is still in publication, and one may yet hope for a more favourable end.