The amended MV Act 1988 has become a norm wef September 1, 2019. With it, there’s been a revision to penalties for many a rule break. One expected outcome of increasing penalties/fines is to prevent traffic violations.

A challan dated September 2, 2019 quite literally showcases how steep fines can be. In this case, the scooterist appears to have committed multiple offences.

They’re listed as follows – Driving without a licence, without a helmet, without RC, woithout third party insurance, and violating air pollution requirements. The fine is clubbed together at a whopping Rs 23,000. In the post below, two more fines have been shared, one of Rs 37,500 and the other of Rs 59,000. 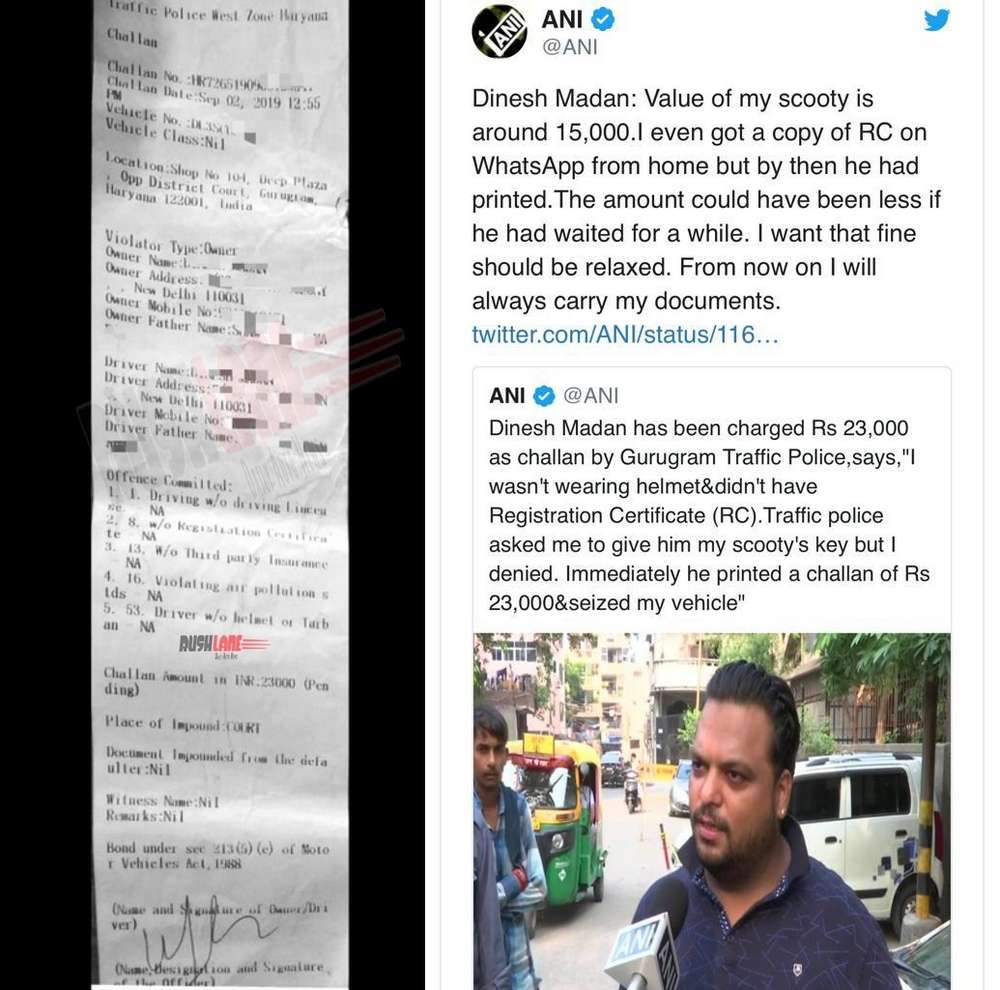 New traffic rules came into effect from 1st Sep 2019. The Legislation provides for stricter punishment for traffic related offences and higher penalties. This also includes compensation of Rs.5 lakhs for death and Rs.2.5 lakhs for grievous injuries in the event of an accident.

Riding without a helmet will attract a fine of Rs.1,000 and 3 months suspension of license. In the case of juveniles caught riding, the guardian or owner of the vehicle will be held accountable with vehicle registration being cancelled. Dangerous driving penalty has been increased from an earlier Rs.1,000 to Rs.5,000 while drunken driving penalty is now Rs.10,000 as against an earlier Rs.2,000.

All common offences such as use of mobile while driving, breaking traffic signals and driving on the wrong side of the road will all be categories under ‘dangerous driving’

While, there are concerns regarding the ambiguity of certain penalties, uncertainty also creeps in because there are state governments that aren’t willing to implement current revisions. This includes West Bengal, Punjab and Madhya Pradesh among others. States are now asking for more time to study the penalty revisions, and understand expected repercussions.

Penalty revision is being viewed differently by differing bodies. While the one school of thought looks at steep fines as a deterrent, the burden of this can be considered far too steep on the common man. There are fines now which are more than a person’s monthly salary. While fines could be a great way to fatten the coffers, there’s no way to predict whether commuters will be able to bear the burden of these fines. There’s also no clarity to what degree the governing body expects to see a reduction of offences in.