Having launched its first BS6 model, the Active 125, Honda Motorcycle and Scooter India is gearing up to roll out the update across its model range in quick succession. Next up is likely to be the Honda CB Shine 125 SP commuter motorcycle. This is the highest selling Honda motorcycle in India – with about 90,000 units sold every month.

The technical specifications of the Honda CB Shine 125 SP BS6 version have emerged and the two wheeler giant has used this opportunity to make more changes than just update the engine. First things first. The 124.73 cc liquid-cooled motor now produces 10.72 hp which is up from 10.16 hp in its BS4 avatar.

While it is not clear as of now, we expect the newer version of this time proven engine to have gained electronic fuel injection. The CB Shine 125 SP is the premium variant of the nameplate and employs a 5-speed transmission. 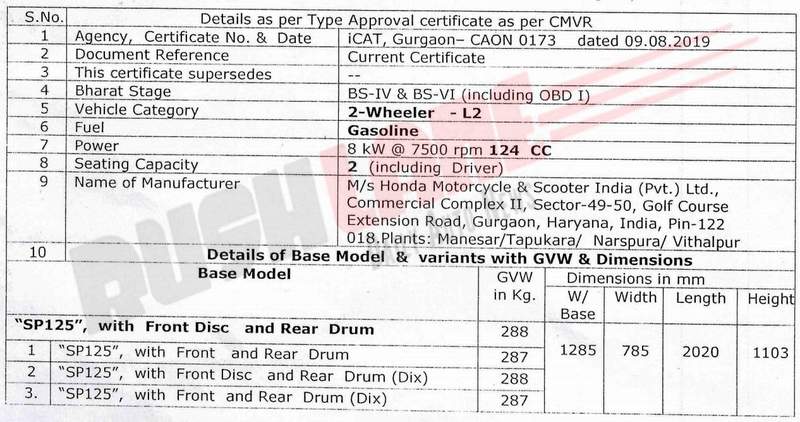 The document also indicates that the BS6 version of the Shine SP has gotten larger than before. The new model has a wheelbase of 1,285 mm which is 19 mm longer than before. When it comes to overall length, the BS6 version is 13 mm longer at 2,020 mm. At 785 mm, it is also a good measure wider (by 23 mm) than the outgoing bike. The bike is taller by 13 mm and this could mean a proportional increase in saddle height.

Given that the SP shares its underpinnings and engines with the regular CB Shine 125, it is reasonable to assume similar changes on the entry level model as well. It is to be noted that the more affordable version of the commuter motorcycle makes do with a 4-speed gearbox.

We expect Honda to offer new colour themes and graphics to complete the Honda CB Shine 125 BS6 facelift. The prices of the BS6 models are estimated to be higher than their respective BS4 counterparts by around INR 7,000 to 9,000. The updated Honda CB Shine 125 SP BS6 would be launched when the BS4 inventory are almost sold out.

The Honda CB Shine 125 SP locks horns with the likes of Hero Glamour, Yamaha Saluto 125 and the newly launched Bajaj Pulsar 125. Honda Motorcycle and Scooter India Ltd. (HMSI) is one of the worst hit OEMs by the ongoing slowdown but with updated models, the company hopes to regain the lost ground.