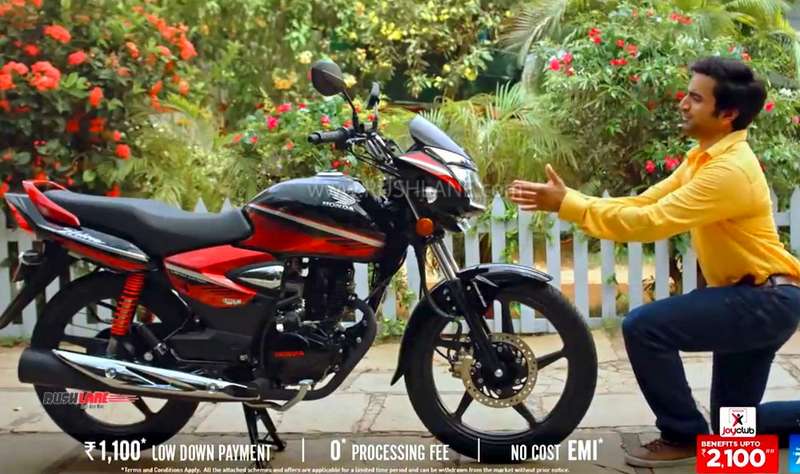 This is priced at Rs.59,083 for the drum brake variant and at Rs.63,743 for the disc brake variant. This was a marginal price hike of Rs.300 over the regular model. Distinctive to the limited edition model are two new dual tone colour options and new body graphics.

A new video has been released showing the instant attraction of the buyer to the CB Shine, falling ‘head over heels’ in love with the new colours and smooth texture. The new dual tone colours include Black with Imperial Red Metallic and Black with Spear Silver Metallic with visual graphics seen on its fuel tank, side panels and rear cowl. It also gets a new visor graphic design as a part of the updates to this limited edition model. Watch the new TVC video below.

The limited edition CB Shine gets no changes where mechanics are concerned. It gets its power via a 125cc, 4 stroke, air cooled, single cylinder engine offering 10.16 bhp power at 7,500 rpm and 10.3 Nm torque at 5,500 rpm mated to a 4 speed gearbox.

Suspension is via telescopic fork in the front and conventional spring loaded hydraulic set up at the rear. Braking duties are carried out via 130mm drum brakes in the front and rear while there is also the option of 240mm front disc brake. The Honda CB Shine competes with the Hero Glamour which is also a high selling bike in the country.

To boost sales of the Honda CB Shine, the new limited edition has been launched at a very marginal price hike of Rs 300. In addition to this, Honda has also announced discount offers of up to Rs 9,100. This includes benefits of up to Rs 2,100 under Honda Joy Club and up to Rs 7,000 cashback via PayTM.