Following its entry into an overcrowded segment, let us see how the new Honda CB300R stacks up against competitors in terms of price, design and engine specifications. Honda CB300R vs Kawasaki Ninja 300, RE 650, KTM 390, Bajaj Dominar, BMW 310.

Design – Honda CB300R stands out with an attractive design the latest in mechanicals and a light kerb weight. It competes efficiently with the other motorcycles in its segment. It gets a Neo Sports Café design borrowed from the CB1000R. It boasts of retro styling with a rounded headlamp, LED lighting with DRLs. Other design elements include an LCD instrument panel, a sculpted fuel tank of 10 liter capacity, new seat design and tank shroud with CB badging. Tapered handle bars offer better handling while the CB300R is the lightest bike in its segment, based on a framework constructed with tubular and pressed steel. 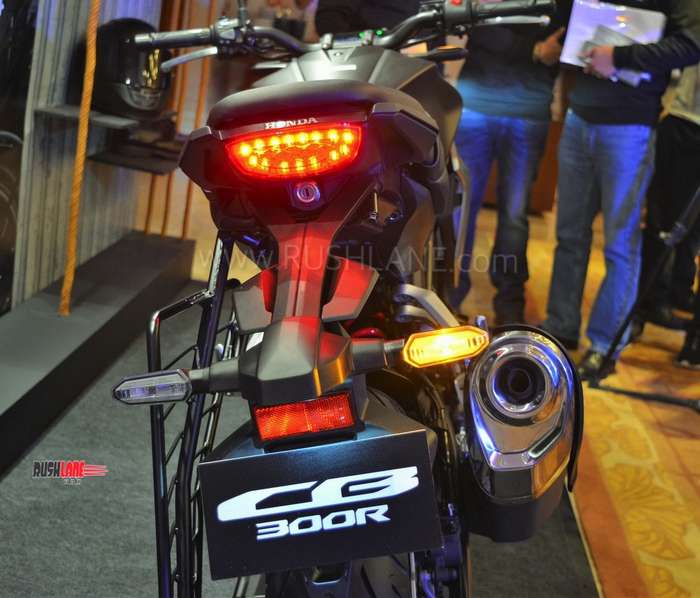 KTM 390 Duke boasts of a lean mean look with an aggressive stance. It gets a complete redesign with full LED headlamps, new exhausts, ride by wire and color TFT tablet type instrument console. BMW G310R is a compact street bike that has been developed by BMW and TVS jointly. It gets a chunky fuel tank, distinctive body panels, alloy rims and a large comfortable seat along with raised tail fairing. Bajaj Dominar 400 was the first bike in its segment to receive LED headlamp. It also gets a stretched wheelbase, sculpted fuel tank and dual digital consoled while it also sits on 17” alloy wheels. The Royal Enfield Interceptor 650 boasts of a roadster design. It gets a dual-cradle, tubular steel framework which has been designed and developed by Harris Performance. Kawasaki Ninja 300 gets a fully faired styling.

Engine Specifications – Honda CB300R is powered by a 286cc, liquid cooled, DOHC, single cylinder engine offering 30.9 bhp power at 8,500 rpm and 27 Nm peak torque at 7,500 rpm mated to a 6 speed gearbox. It gets 41mm upside down forks in the front and monoshock at the rear with 7 step preload adjustability. Braking is via 296 mm floating disc in the front and 20mm disc with single piston caliper at the rear. 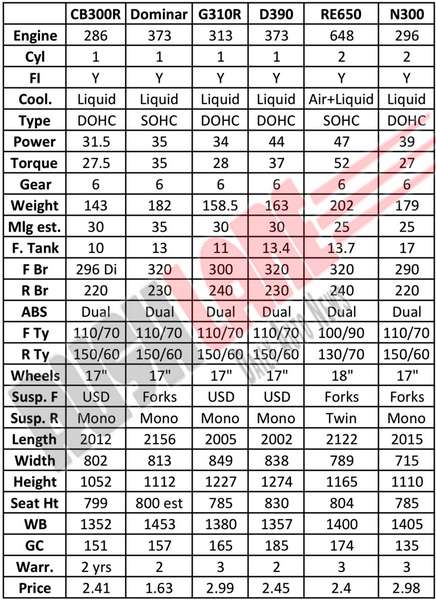 BMW G310R is powered by a 313 cc, single cylinder, 4 stroke engine offering 34 bhp power at 9,000 rpm and peak torque of 28.4 Nm at 7,500 rpm. Suspension includes upside down front forks and a rear monoshock. Braking is via 300 mm disc in the front and a 240 mm single disc with single piston floating caliper at the rear wheel. Bajaj Dominar 400 also receives a 373 cc, liquid cooled, single cylinder, fuel injected engine offering 34.5 bhp power and 35 Nm torque mated to a 6 speed gearbox. It gets telescopic front forks and rear monoshock and 320mm disc brake in the front and 230mm disc at the rear.