After posting the first test ride review of Honda CB350, vlogger Abhinav Bhatt has shared yet another exclusive video

Launched in September, Honda CB350 aka the H’ness has been receiving a lot of appreciation from biking enthusiasts. Now that deliveries have commenced, we are also witnessing a number of on-road test drive reports from owners and other users. In this latest ride experience report, YouTuber Abhinav Bhatt tries to find out if Honda CB350 has the capabilities to take on the challenging terrain of high-altitude locations such as Spiti Valley, Leh and Ladakh.

These locations are among the most challenging for any vehicle, as there are several patches of bad roads, loose gravel dirt tracks, and slushy wet mud filled potholes. Extreme weather conditions and low oxygen levels are other factors that can challenge the road worthiness of vehicles at such locations. This is the reason why most auto companies usually test their new vehicles at these places.

Due to these reasons, many biking enthusiasts are curious to know if Honda CB350 can take the Leh, Ladakh challenge. Some of the answers are in the below video, in which the rider takes the CB350 on an off-road trip in Aravalli hills near Delhi.

As can be seen in the video, this off-road track is nowhere close to the rough tracks of Leh, Ladakh. However, it can still be used as a reference point to get a basic idea about how the bike will perform in an off-road environment. The biker had earlier posted a video about riding the CB350 on city streets and highways. In that test ride too, the bike had performed as per expectations.

From his initial experience, the biker feels that Honda CB350 has a relatively harder suspension and seat, as compared to Royal Enfield motorcycles. According to him, this can be a problem for long distance touring. However, apart from that, CB350 seems like a better designed product in comparison to rivals.

This off-road track primarily comprises a dirt track with loose top soil. There are bumps and depressions all along the track as well as some patches of rocky terrain. From the rider’s perspective, CB350 has performed exceptionally well on this track. Throughout most of the journey, the motorcycle was being driven at a speed of around 30 kmph. The rider did not attempt higher speeds, as CB350 is not built for high-speed off-roading. 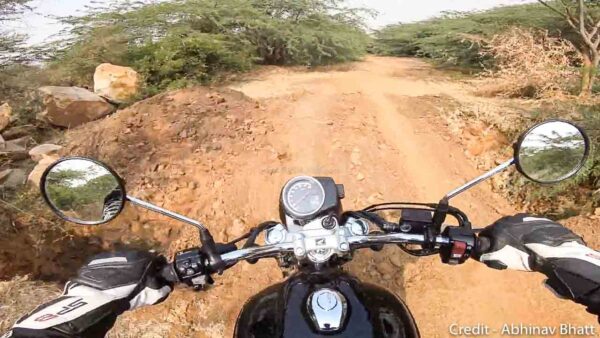 Despite the bumps, the entire journey was quite comfortable. There was no performance issues noticed with CB350. Powering the bike is a 348 cc motor that is capable of generating 21 bhp of max power at 5500 rpm and 30 Nm of max torque at 3000 rpm. That’s slightly more than Royal Enfield Classic 350 that makes 19.1 bhp / 28 Nm. However, Jawa has the max power output in this group at 26 bhp. Both CB350 and Classic 350 have 5-speed transmission whereas Jawa has 6-speed transmission.

Other things that made this journey comfortable include the assist and slipper clutch and the smooth gearbox. Even on the varyingly uneven terrain, using the clutch and changing gears was largely an effortless experience. Another important thing to note is that the gear design makes it possible to change the gears with just your heels. One doesn’t need to put the front of the shoes beneath the gear shaft. This will be useful for folks who may be planning to use CB350 for office commutes.

This test run provides a rough idea about the motorcycle’s fuel efficiency. On the real-time mileage indicator, the numbers show up as 37 kmpl, which is pretty good for a 350 cc motorcycle. Throughout the journey, the thumping sound of the motorcycle is clearly audible. This is another plus for CB350, as the aural experience is one of the primary factors why people prefer rival Royal Enfield motorcycles. CB350’s exhaust note is not as loud as Royal Enfield, but it does give you a sense of riding something powerful.

Although CB350 seems to outperform its rival in most aspects, the biker feels that it is unlikely to beat Royal Enfield anytime soon. Royal Enfield motorcycles have acquired cult status over the years and there are a lot of emotions involved. It can be said that CB350 is a way too perfect machine whereas Royal Enfield has a more humane character with its mix of goodness and imperfections. Relating to the latter is naturally easier for users.

Another potential problem is that CB350 is being sold via Honda’s premium Big Wing dealerships. These are fairly less in numbers, as compared to Royal Enfield that has wide presence even in small towns and cities. Honda has said that it will increase the number of Big Wing outlets, but that could take time.

Overall, the biker feels that Honda CB350 can definitely conquer the heights of Leh, Ladakh. However, he also mentions that all of these are his personal opinions. The experience can vary from user to user based on a range of factors such as riding skills, prejudices, etc. From a business perspective, it’s the sales numbers that ultimately decide the winner. And that will be revealed in the coming months.