After a long wait and considerable suspense, Honda has finally revealed its rival to Royal Enfield in India

The name is Honda H’ness CB350, launched at a starting price of approx Rs 1.9 lakh (ex-showroom). The Honda CB350 roadster will be sold through the company’s premium ‘Honda Big Wing’ dealerships.

H’ness is inspired by Honda CB motorcycles of 1960s that were distinguishable with their round headlight, round rear view mirrors, chrome fenders & accents and comfortable riding stance. To understand how it will fare against rivals, here’s a quick comparison of Honda CB350 vs Royal Enfield Classic 350 vs Royal Enfield Meteor 350 vs Jawa 300. Do note that Meteor 350 is yet to be launched, so below specs of Meteor 350 are via leaked material, and not official.

All four motorcycles have retro styling and are offered with attractive colour options. It’s difficult to say which one has the best design & styling, as it’s a subjective matter and depends on individual tastes and preferences. All four bikes share quite a few common features such as round headlamps, teardrop shaped indicators and liberal use of chrome bits. These bikes have a comfortable riding stance and are designed for long distance touring. 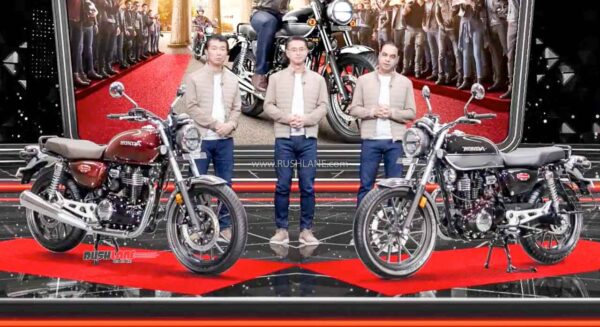 There aren’t significant differences in length, width, and height of CB350, Meteor, Classic 350 and Jawa. Talking about ground clearance, which could determine off-roading capabilities, Meteor and CB350 are better placed with 170 mm and 166 mm, respectively. In comparison, Classic 350 has ground clearance of 135 mm.

In terms of wheelbase that can influence stability, Honda CB350 leads the pack with 1441 mm. On the negative side, longer wheelbase can adversely impact a motorcycle’s manoeuvrability. Coming to kerb weight, Jawa is the lightest at 172 kg. CB350 comes second with 181 kg whereas Classic 350 is heaviest at 195 kg.

While CB350 utilizes a half-duplex cradle frame, Classic 350 and Jawa are equipped with single downtube and double cradle frame, respectively. All four bikes have telescopic front forks. Rear suspension of CB350 and Jawa are twin hydraulic units whereas Meteor and Classic 350 have adjustable twin springs and twin gas charged shock absorbers, respectively. All four bikes have disc brakes at both ends and are equipped with dual-channel ABS.

To remove any doubts in the mind of customers, Honda has equipped CB350 with a range of first-in-segment features. These give CB350 a definitive advantage over its rivals. They are available across the range including design & styling, performance, technology, comfort and safety. Starting with the visual aspects, CB350 comes with first-in-segment LED headlight and LED tail lamp with ring type winkers. This adds a regal look to the bike and enhances its style quotient.

In terms of performance, CB350 has selectable torque control that prevents rear wheel slips caused by abrupt acceleration. This feature also improves ride quality in varying terrain and environment. Another segment first feature is assist and slipper clutch, which ensures smoother deceleration and less fatigue for the rider.

In the tech department, CB350 is equipped with first-in-segment Bluetooth based connectivity system. It allows users to seamlessly access phone calls, music, messages, and turn-by-turn navigation. Colour options on offer are 6, of which 3 are dual tone.

Warranty on board the Honda CB350 is for 3 years standard. You have the option to buy extended warranty of 3 years, making it a total warranty of 6 years. No other motorcycle in the segment offers 6 years warranty. Royal Enfield Classic 350 BS6 comes with 2 yrs warranty, which can be extended by 3 years, making it total 5 years. Jawa offers they lowest warranty. Meteor 350 warranty as per leaked info stands at 3 years / 30k kms. RE could offer extended warranty of 3 years when launched.

Meteor and Classic 350 are the most affordable motorcycles in this group, available at a starting price of Rs 1.68 lakh (expected) and Rs 1.69 lakh, respectively. Next is Jawa, which is available at Rs 1.83 lakh. Honda CB350 is the costliest at Rs 1.9 lakh (expected).

Royal Enfield is the best selling brand in the 350cc segment – selling over 45k units every month (Classic 350, Bullet 350, Electra 350). With the Meteor 350 soon the launched, RE can expect sales to increase even further. Will Honda CB350 manage to put an end to RE’s monopoly in the segment?

Based on initial impressions of Honda CB350, it would not be wrong to say that Royal Enfield finally has a formidable challenger. Jawa had evoked similar feelings at the time of its launch, but things didn’t move forward as expected due to considerable delay in deliveries as well as quality issues. Such problems are unlikely to be there with Honda.

However, things won’t be easy for Honda as well since customer perceptions are tough to change. Royal Enfield motorcycles enjoy cult status, something that would be challenging to conquer. CB350 is the costliest motorcycle in this segment, which is another factor that can influence customer purchase decisions. Another reason which could hamper CB350 from becoming a sales hit, is that it is only going to be sold via the Big Wing dealer network, which has hardly any presence across the country.

On the positive side, things that could work out in favour of Honda CB350 include its understated elegance, an array of 1st-in-segment features and the trust and reliability that comes with Honda brand name. CB350 can create its own fan following, comprising folks looking for an upgrade and some of the existing Royal Enfield fans who may want to try something new. It would be interesting to see how this battle shapes up in the coming months.