Honda Motorcycle & Scooter India (HMSI) has updated the Navi scooter with Combined Braking System (CBS). The addition of this safety feature is well ahead of the April 1, 2019 deadline, set by Govt of India. It also sees a change in sticker price, which now stands at Rs.47,110, a premium of about Rs.1,800 over the standard version.

2019 Honda Navi with CBS feature allows better braking performance. When the rider applies the rear brake, the front brake is also partially applied so as to offer equitable braking and a reduced overall braking distance.

Other than CBS and new tubeless tyres, other features remain the same on the Honda Navi which is presented in 6 color options of red, white, black, brown, green and orange. 2019 Honda Navi measures 1,805mm in length, 748m in width and 1,039mm in height. It gets a wheelbase of 1,286mm and ground clearance of 156mm while kerb weight is at 100kgs and fuel tank of 3.5 liter capacity. Honda Navi gets 12” front and 10” rear wheels fitted with 90/90 and 90/100-section tyres respectively

Honda Navi is powered by the same 110cc single cylinder engine that also powers the Honda Activa scooter. This engine is capable of 8.03 PS power at 7,000 rpm and 8.94 Nm torque at 5,500rpm. Mileage figures stand at 37.57 kmpl. It gets telescopic forks in the front and spring loaded hydraulic monoshock at the rear while braking is via drum brakes at both ends. 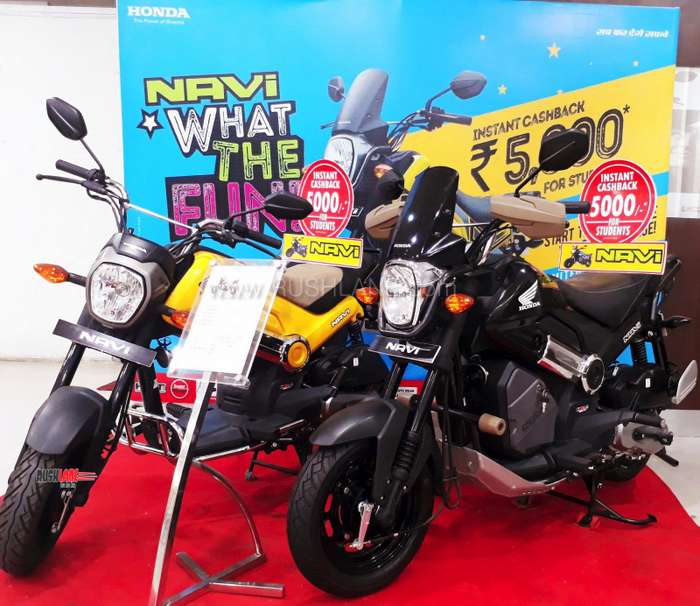 Honda Navi is a fusion of motorbike and scooter; with the body type of a motorcycle but engine of a scooter. It was launched in 2016 to appeal to young riders in the country. Honda Navi sales have not been promising. In Nov 2018, only 1 unit was sold, while in Dec 2018 0 unit were sold. This could be due to the upcoming launch of 2019 Navi with CBS that the production of 2018 variant was stopped. It will be interesting to see if the addition of CBS will result in improved sales.

Along with Navi, the Honda CD110 also received this CBS feature and now it is the Honda Cliq left to be fitted with this safety feature. This is in accordance with new regulations wherein scooters below 125cc should be equipped with CBS while those above 125cc should get ABS as a standard feature.