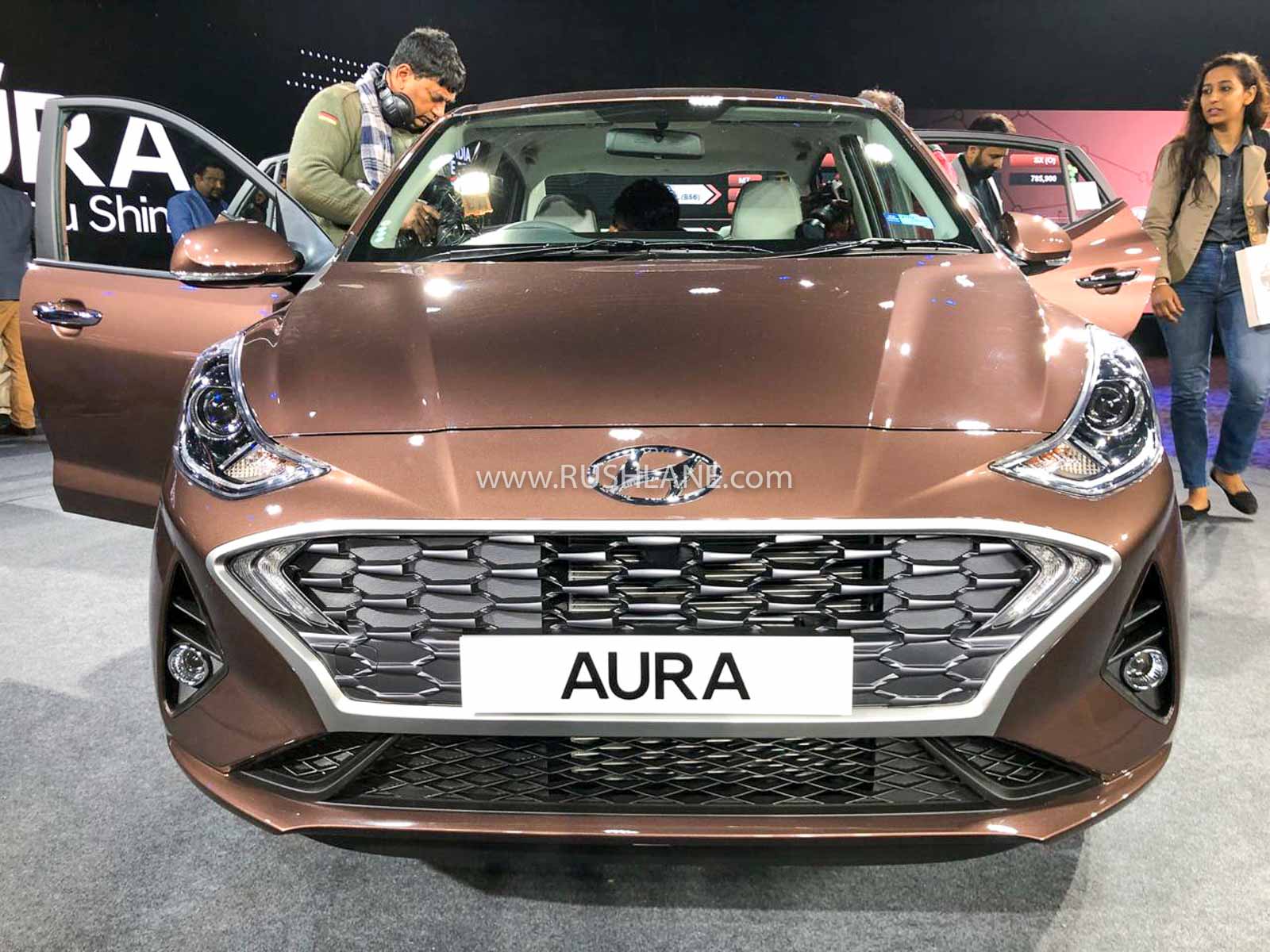 The Hyundai Aura, compact sedan derivative of the recently launched Grand i10 Nios hatchback, has been officially launched in India.

While its predecessor, the Hyundai Xcent will continue to cater to fleet and commercial segments, the Aura will take over the baton when it comes to private car market. With a fresh styling, a new engine in the lineup and modern equipment, the new sub-4m sedan is aiming to create an impact in a segment that has been witnessing a monopoly for years.

The new Hyundai Aura will be locking horns with the segment leader Maruti Dzire in addition to competing with fellow compact sedans such as Honda Amaze, VW Ameo, Ford Aspire and Tata Tigor. Let’s see how the new entrant stakes up against its rivals in a spec and prices comparison.

Dimensions – Given that the dimensions are dictated by the excise duty regulations, there isn’t much difference in terms of overall length of the compact sedans in question. The Nios-based Aura benefits from a longer wheelbase (by 25 mm compared to Xcent). At 2,450 mm, the Aura’s wheelbase is identical to that of the segment leader Maruti Dzire, and Tigor. At 2,490, the Ford Aspire has the longest wheelbase in the segment.

The Aura is wider than its predecessor by 20 mm but is still 55 mm narrower that the Dzire. The radical design which is aimed at improving the proportionality has cost 5 liters of bootspace. At 402 liters, the Aura’s boot capacity is better than that of VW Ameo, Ford Aspire and Maruti Dzire but Honda Amaze (420 liters) and Tata Tigor (419 liters) fair better.

Engines – Coming to the powertrain department, the Hyundai Aura’s lineup consists of BS6-ready versions of Xcent’s petrol and diesel units in addition to the new 1.0-liter turbo petrol borrowed from the Venue. The 1.2-liter naturally aspirated petrol unit continues to dish out 83 hp and 114 Nm of torque. The 1.2-liter turbo diesel mill also retains its output figures at 75 hp and 190 Nm of torque. A 5-speed manual transmission is standard but both engines (diesel for the first time) can be opted with a 5-AMT. The new 1.0-liter turbo petrol motor produces a healthy 100 hp and 172 Nm of torque. It is available exclusively with a 5-MT. The 1.2 liter variant is also offered with a factory fitted CNG option.

As far as petrol engines are concerned, the new Hyundai Aura 1.0L emerges as the most powerful sedan in the segment but when it comes to diesel, the VW Ameo 1.5L tops the table at 110 hp. However, once the BS6 norms kick in, the diesel variants of Tigor, Ameo and Dzire are set to be discontinued, thereby handing the diesel Aura a significant advantage. The 1.5L diesel units of Ford Aspire and Honda Amaze will receive BS6 update and continue to be most powerful in the segment with 100 hp on offer.

In terms of aesthetics, the Hyundai Aura’s radical design takes a bit of getting used to but it does bring a fresh appeal to the segment. The compact sedan will be offered with as many as 12 segment-first features. Highlights include an 8-inch touchscreen infotainment system with Apple CarPlay and Android Auto, wireless charging, Arkamys audio system, a 5.3-inch MID on instrument console, 15-inch diamond-cut alloy wheels, boomerang-shaped LED DRLs, etc. 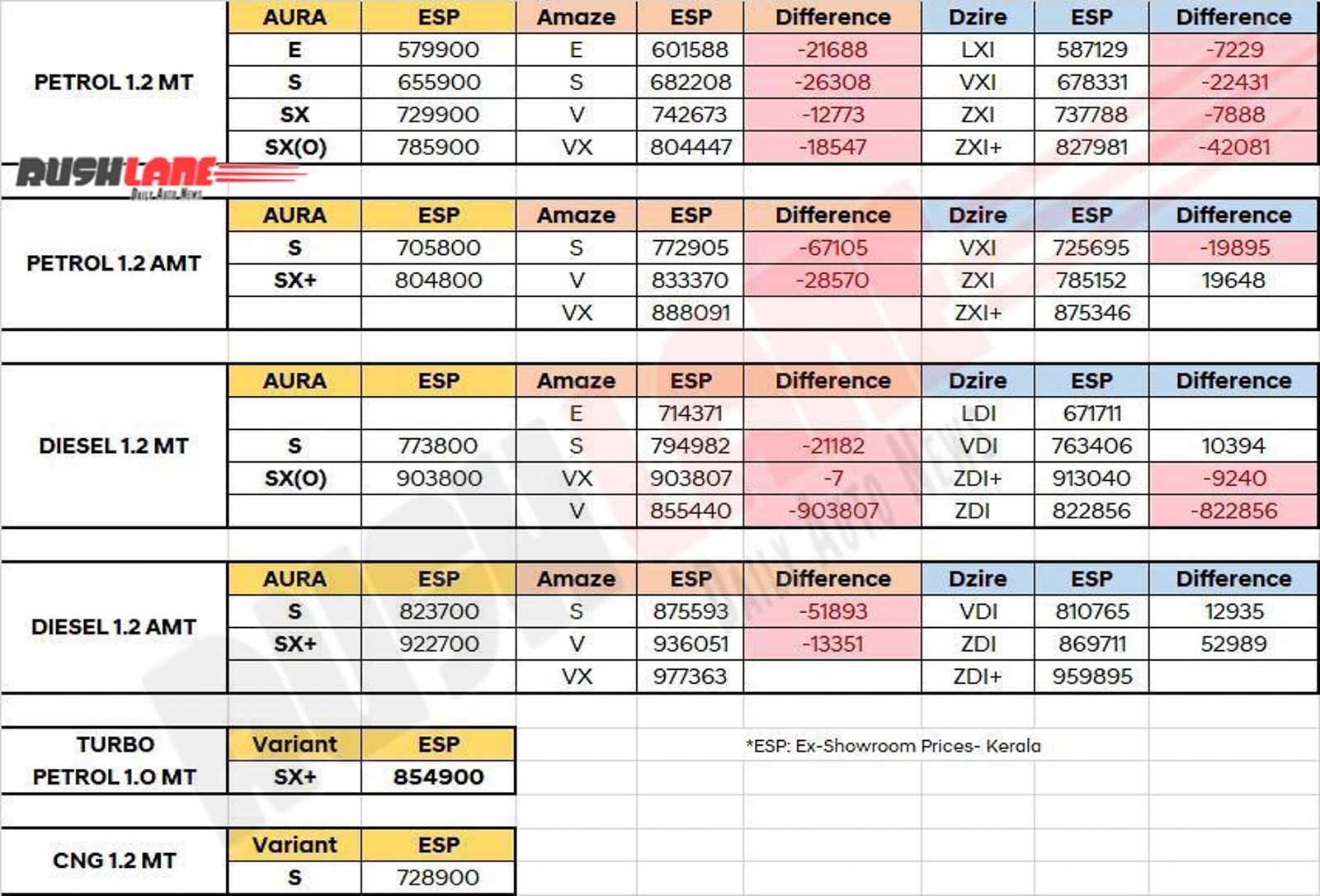 Prices – With a turbo petrol engine, lengthy equipment list and BS6 compliance, the Hyundai Aura is likely to emerge as the most expensive offering in the highly competitive sub-4m sedan segment. While the existing compact sedans have starting price points just under INR 6 lakh (ex-shoroom) mark, Aura is priced aggressively, with a starting price that is lower than both rivals.

The Hyundai Aura is expected to increase the automaker’s market share in this segment significantly. While the Maruti Dzire is the car to beat in this space, the Honda Amaze will be the Aura’s more realistic rival when it comes to monthly sales volume. The Ford Aspire, VW Ameo and Tata Tigor are expected to continue their status quo. With the exception of the Dzire, the sub-4m sedan segment has been witnessing increasing pressure from the emerging sub-4m crossover segment over the last few years. We don’t expect the Aura to change this dynamics quite significantly although it seems to have the potential to bring it incremental volumes to its segment.