One of the bestselling vehicles in Hyundai’s portfolio, Creta has seen quite a lot of customization jobs since its launch in 2015. While some of these customizations have targeted practical improvements to the vehicle, others involved cosmetic changes to the exteriors. Taking it to an altogether new level is this latest customization job that gives Creta a set of massive 33-inch tyres shod on golden coloured wheels. With the large tyres, Creta looks like a miniature version of a monster truck.

Practical use of this customized Hyundai Creta seems unlikely, as Supreme Court had recently declared all customizations in cars and two-wheelers as illegal. However, it is possible that this modified Creta can be used for off-roading purposes.

As obvious in the photo, the identity of the car is being kept secret by removing the rear number plates and replacing the front plates with ‘VIPMANDEER’. The only clue is ‘Ratnalakhi Medicos’, which indicates that the photos may be taken someplace in Assam, probably Guwahati. However, it still does not reveal anything about the owner and who may have carried out the customization.

To accommodate the massive tyres and 15-inch wheels, changes have been made to the bumper. The wide wheels jut out of the wheel arches, and overall it does not seem to be a pretty sight. The car also has roof-mounted lights, which is another indication that it may be designed for off-roading purposes. However, it’s difficult to say whether just having big wheels will make Creta good enough for off-roading. Creta’s engine was never meant for off-roading and it also lacks AWD. 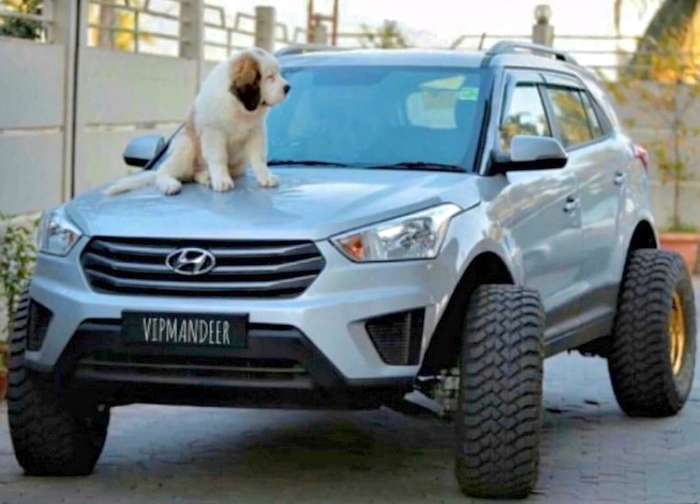 The customization neither gives a powerful look to the car, nor does it make it more attractive. So it’s difficult to determine what the real purpose of this customization is. Or it may be a Work-in-Progress and further additions may be underway.

While rivals are trying to create products that can beat Creta, Hyundai is working on launching Styx that will take on Maruti Brezza, Tata Nexon and Ford EcoSport in the compact-SUV segment. Hyundai will also launch Kona electric car that has a driving range of 350 km. New gen Creta and Tucson are also on the cards.