The company plans to develop one prototype for the race-specific model and make it operational by next month. If everything goes as per plan, it will undergo complete public evaluation and development by December this year. The ultimate goal of the company is to make use of this high-performance fully electrified Kona for the New Zealand rally Championship next year and other races henceforth.

Details of the Project

The project was announced last year by Paddon in order to give New Zealand’s motorsport community a global reach. The Kona Electric Rally spec is being developed jointly by Hyundai New Zealand and Paddon Rallysport with assistance from Yes Power, University of Canterbury and STARD, which is an Austrian motorsport team working on electric rallycross vehicles and part of the Stohl Group.

Paddon Rallysport recently unveiled the aftermarket suspension setup to be used in this Kona Electric rally version. The company had partnered with Italian aftermarket automotive manufacturer- Extreme Racing Shox in developing the custom made suspension setup. Thanks to this new suspension, the rally-spec Kona Electric sits very low as compared to the standard road-specific model. It also is heavier than the regular model. 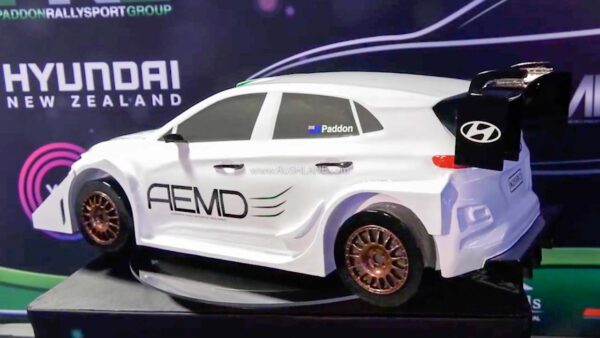 At the start of manufacturing the rally-spec Kona Electric, the car was dismantled to its last bit and later reassembled to form an electric car. The process saw a big delay in April and May this year when the Covid-19 pandemic hit hard and was at its peak in New Zealand.

This made them cut their budget so that no member had to be dropped from their team due to this crisis. The team is back on track and is confident of completing the prototype ahead of next year’s New Zealand Rally Championship although they are likely to miss the first few rounds.

By June this year, the cage and chassis were almost ready with the transmission and motors to be incorporated next. The battery arrived at its expected time in July when most of the car was ready. As for the body-kit, Haydon had revealed that they will be using carbon to manufacture it. By early 2021, the team expects the custom Kona Electric to be doing hill ascents and short sprints.

A total of four motors can be packed on the rally car, each of them capable of generating around 300 PS of power. In the rally though, a twin motor setup will be employed which would be generating nearly 600 bhp of power. However, for the short runs and hill ascents, all four battery packs could be used to give a power of around 800 bhp. Paddon is also expected to get behind the wheels of the Kona Electric during the rallies.