Back in 2019, it had launched the Kona, which was the first electric SUV of the country and in terms of practicality, the first reliable electric vehicle of the nation. Now, as per a Govt Ministry document, Hyundai India has received a Type approval for the Hyundai Nexo Fuel Cell Electric Vehicle (FCEV).

The South Korean car maker calls Nexo, ‘The Ultimate Eco-Friendly Mobility Solution’. It is to be recalled that the Nexo had made its first public appearance in India back at the 2020 Auto Expo. At the moment, there is no official confirmation from Hyundai’s end, regarding the launch of the Nexo. However, as per reports, the Nexo will get launched in the country by end of 2021. 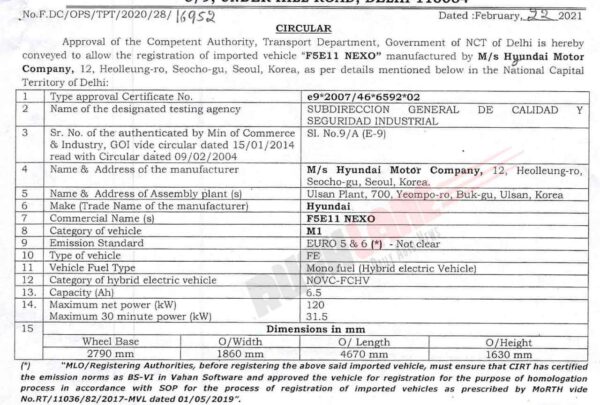 The Nexo is powered by a 95kW fuel cell which is mated to a 40kW battery. The electric motor of the Nexo can dish out 161 bhp and 395 Nm of peak torque. The powertrain combination is powerful enough to make the SUV touch a max speed of 179 kmph. Acceleration levels are decent as it can reach 100 kmph from standstill in just 9.2 seconds.

Nexo gets 3 hydrogen tanks which have a combined capacity of 156.6 litres. The capacity is good enough for the Nexo to clock 666km on a full tank, as per the WLTP cycle. Unlike EVs which can take hours for charging, the hydrogen tanks can be refilled in just 5 minutes. Hyundai has further stated that its fuel cell technology can work in even extreme weather conditions.

In international markets, the Nexo FCEV gets multiple autonomous driving functions. These include a new generation blind spot monitor, highway driving assist system (HAD) and a lane following assist (LFA). It also gets a remote parking system which allows the car to self-park as per requirement.

Hyundai’s focus on sustainability and green mobility can be felt even in the cabin, as the Nexo FCEV gets vegan leather seats and floor mats which are made of cane sugar derived eco fibers.

There are high chances that when Hyundai brings the Nexo to India, it will be one of a kind vehicle as at the moment no Hydrogen powered vehicles are commercially sold/manufactured in India.

As the Nexo happens to be a cross-over SUV, its body type too should help it to get faster acceptance in the Indian market. As far as tentative pricing is concerned, it will be difficult to speculate as the pricing would be a factor of the taxation regime.