The Hyundai Saga electric mini SUV concept which was teased last month has made its world premiere at the Sao Paulo Motor Show. The design study, penned by Hyundai Design North American in Irvine, California, previews the next generation Hyundai HB20X crossover for the Brazilian market.

We expect the production version of the Saga concept to be ready in about a year’s time as the HB20X (i20 Active’s Brazilian counterpart) is nearing the end of its life cycle. The Saga is designed as a compact crossover right from the word go unlike the HB20X which is essentially an hatchback with rough road package. 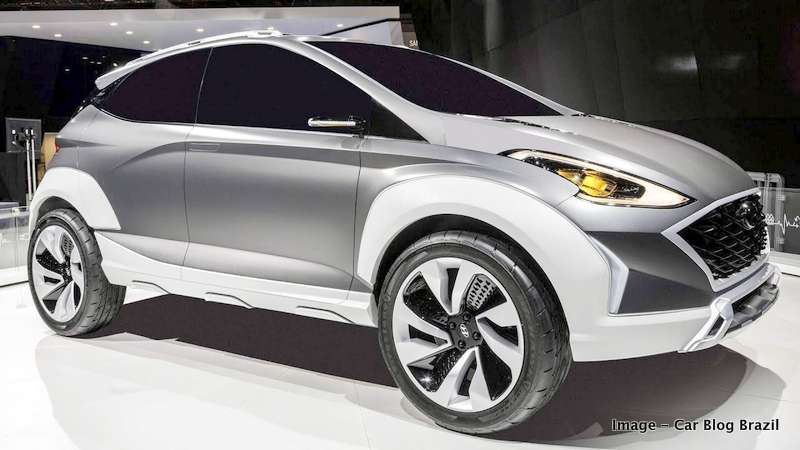 The design language is fresh and hardly has anything in common with Hyundai’s global portfolio. The crossover employs smooth flowing curves rather than edgy lines favoured by other modern Hyundais. The new generously proportioned hexagonal grille has no chrome whatsoever, and the LED infused headlamp cluster looks funky.

The extensive plastic cladding all round adds to the crossover’s appeal. The tapering rear fascia is characterized by boomerang-shaped LED taillights, heavily contoured hatch door and a sporty diffuser. The interior has not been revealed. Expect the production model’s styling to be mildly watered down.

The Hyundai Saga electric SUV concept borrows its powertrain from the fully loaded Hyundai Kona electric. The electric motor has a rated power of 150 KW (202 PS) which is more than adequate for a compact SUV. The motor is supported by a 64 kWh lithium-ion battery pack which has a claimed range of 470 km. Using a quick charger, 80% of charge can be achieved in just 54 minutes.

While the Saga concept primarily previews a Brazil-spec product, we can expect an equivalent model (with possible design and feature variations) for Asian and European markets. Hyundai India is looking to have a sub-Kona electric SUV in the future and it could be a derivative of the Saga concept.