Hyundai Motors India Ltd. (HMIL) has introduced two new trim levels to its entry-level hatchback Santro. Both these trims run on CNG and have been renamed as Magna Executive CNG and Sportz Executive CNG. Meanwhile, the current CNG variants- Magna CNG and Sportz CNG have been discontinued.

The higher-spec Sports Executive CNG also gets an electrically adjustable ORVM and a day/night IRVM over a manual ORVM and IRVM offered in the Magna Executive. Also, the ORVM in Sports Exec. gets integrated side turn indicators. Rest there is not much difference between the two models. 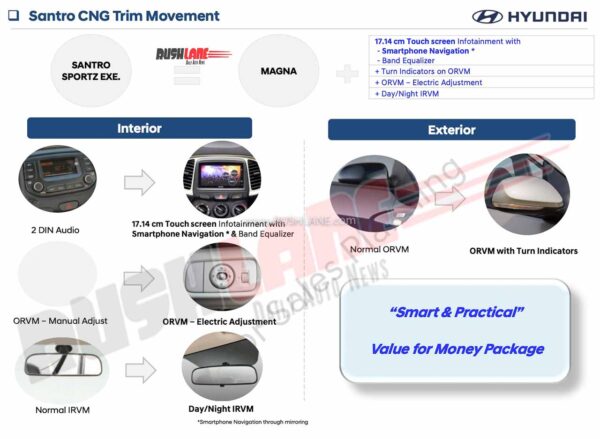 Considering the number of features available in the Sportz Executive trim at a small premium over Magna Executive, it is evidently a more value for money product than the latter. Hyundai also intends to promote it in the same manner so that more audiences get attracted to the higher-spec CNG trim at an attractive price.

In terms of performance, both variants get the 1.1-litre naturally aspirated engine which produces 59.18 bhp at 5500rpm and 85.32Nm of peak torque at 4500 rpm. This is paired with a 5-speed manual gearbox only. In its stick gasoline form, this powerplant is capable enough to generate 68 bhp and 99 Nm of peak torque and also gets the option of a 5-speed AMT gearbox.

Sales of the Hyundai Santro have not been upto expectations. From selling an average of 8,000 units a month in the initial months of launch back in 2018, sales have now declined to about 2,000 units a month. This when compared to rivals, Maruti WagonR sells about 13k per month while Tata Tiago averages at about 6k a month. Launch of new CNG variants could help bring in added sales during the upcoming festive season.