New Hyundai Santro, launched in India in October has taken on the supermini segment by storm. The company has received overwhelming response for the new hatchback with orders flowing in resulting in a huge waiting period. In view of this, Hyundai announced an increase in production from the earlier 8,500 to 10,000 units a month.

2018 Hyundai Santro hatchback is priced from Rs 4.24 – 6.14 lakhs. It continues to sport its tall boy image even though it is built on a new platform. Slotted between the Eon and Grand i10, the Hyundai Santro is presented in five variants of D-Lite, Era, Magna, Sportz and top of the line Asta. Bookings have now crossed a record 57,000 units.

Color options on offer are bright blue, red, green, white, grey and gold. The new Santro is not seen with alloy wheels or LED DRLs. It sits on 14” wheels with silver wheelcaps but gets new design elements, added styling and a few best in class features.

The top of the line variant is seen with a 7” touchscreen infotainment system with Android Auto and Apple CarPlay. Other features such as steering mounted controls, electric power steering and electrically operated ORVMs also on offer. Standard safety kit includes driver airbag, ABS and EBD. Top end variant is also seen with passenger airbag and reverse parking sensors as well. 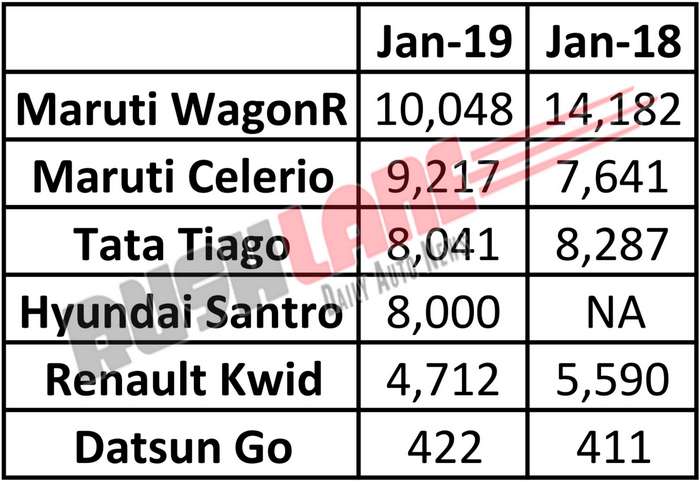 Hyundai Santro gets powered by a 1.1 liter, 4 cylinder, Epsilon engine which is the same engine that used to power the earlier generation model. This engine offers 67 bhp power and 99 Nm torque. It gets mated to a 5 speed automatic gearbox and 5 speed AMT. There is also a dual fuel CNG option, which offers 59 bhp of power. Fuel efficiency of the petrol powered engine stands at 20.3 kmpl while the CNG version returns 30.48 km/kg as per tests conducted by ARAI.

The new Hyundai Santro competes with the Tata Tiago, Maruti WagonR, Celerio, Datsun redi-GO and Renault Kwid. Speaking about sales, it is the WagonR and Celerio which are the top selling cars in the segment. After that it is Tata Tiago on No 3, followed by Santro on No 4.