Hyundai India has announced the debut date of their new sub 4 meter SUV, which will sit below the Creta in company line up. Known by multiple names as of now, QXi / Carlino / Styx, official name of this new SUV has not been announced. It is expected to be revealed in the coming days.

But before that, thanks to publicly available trademark filing records, it has now been revealed that Hyundai India recently trademarked two new names – Aura and Venue. Hyundai Aura or Hyundai Venue could be the new name of the upcoming compact sub 4 meter SUV. 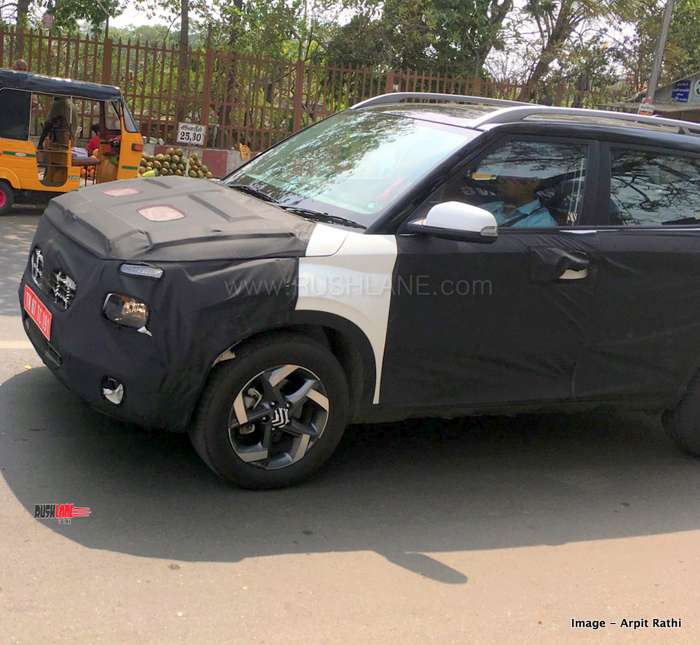 The new sub 4 meter compact SUV, to be positioned between the Hyundai Elite i20 and Creta in the company lineup. Hyundai India is actively testing their new sub 4 meter SUV ahead of launch. Being a global SUV, Hyundai will also showcase the SUV at the 2019 New York International Auto Show on the same date – 17th April 2019.

Hyundai small SUV has been spied testing in many countries around the world, including Europe, US, South Korea and in India as well. Last week Hyundai India released the first official teaser of the SUV, with the focus on keywords like Powerful, Sophisticated, Connected, etc. The teaser video showed the SUV making its way out of the Hyundai plant in Chennai. It was sporting a two tone color scheme, the Hyundai Styx then speeds across Chennai in complete camouflage.

Earlier sightings of the Hyundai Carlino concept based SUV have revealed a boxy styling with features borrowed both from the Creta and Kona electric SUV. It gets a hexagonal front grille, new headlamps and LED DRLs along with pull type door handles, roof rails and dual tone 16” machine cut alloy wheels.

Interiors will also be loaded with features. It will sport an interior color scheme of all black with segment first ventilated front seats (1st in segment feature), an electric sunroof and a large 8” touchscreen infotainment system offering Android Auto and Apple CarPlay. To comply with new safety norms, the Carlino will receive 7 airbags, hill hold assist, hill descent assist and ABS and EBD as standard. Safety features will also include steering mounted controls, start/stop button and height adjustable driver seat.

Hyundai Aura or Hyundai Venue SUV will be powered by the same 1.4 liter petrol and 1.4 liter diesel engine option on offer with the Verna currently. In addition to this, it will also be offered with a new generation 1.0 liter 3 cylinder turbo engine, mated with a dual clutch 7 speed automatic gearbox. Once launched, it will rival the likes of Mahindra XUV300, Tata Nexon and Maruti Brezza. Expect prices to be in the Rs 8-12 lakh range. It will sit below the Creta SUV in company line-up.