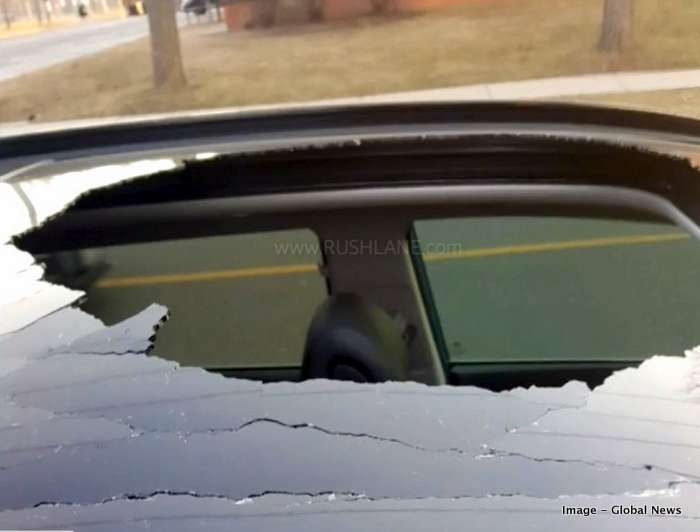 Mark Barsoum draws attention to a frightening experience he had with his Hyundai Tucson while driving to work on Highway 427 in Toronto. He states that the sunroof of the Tucson suddenly shattered, showering the road behind him with a rain of glass shards onto the path of the other drivers.

This is not the first such instance of the sunroof shattering as other vehicle owners have also complained of similar situations. While Barsoum’s sunroof looks like it has been hit by a bowling ball, it was not hit by any object but just ruptured without any external force.

Barsoum and his wife did not suffer any injury on account of this shattered glass but were visibly shaken by the noise and occurrence. Barsoum has shown off pictures and video from the dash cams on the front and rear of the 2017 Hyundai Tucson to substantiate his claim and is seeking answers as to why this happened without any warning.

Barsoum’s Hyundai Tucson is just two years old and has completed 40,000 kms when it met with this fate. It had to be towed to the company dealership for evaluation and warranty. However, the dealership has already informed Barsoum that the sunroof, which is priced at $800, is not covered under warranty and hence an insurance claim has been filed.

Similar cases have been filed by other Hyundai owners who have also experienced the shattering of the sunroof on their models. However, none of these claims have been proved in court while as on 16th October 2017 there have been 351 complaints filed with Transport Canada with 61 involving Hyundai cars. Other car owners of Nissan, BMW and Ford have also registered complaints of shattering sunroofs with contaminated glass being the possible cause of such accidents.

Hyundai has assured its users that safety and security of customers is of paramount importance to the company and all company products are backed by a five year warranty which has benefited many customers in Canada.