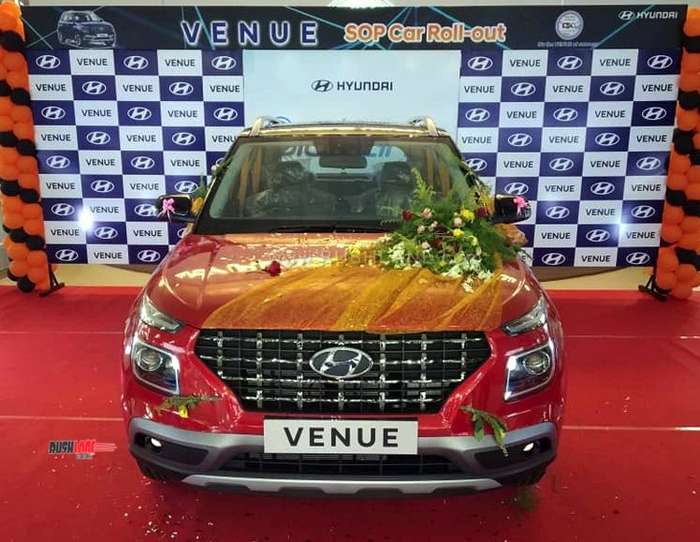 Hyundai Venue has already made its presence felt in India, ahead of official launch on 21st May. The Venue borrows styling touch from various Hyundai SUVs, including the Creta, Santa Fe and the Kona. Overall, the design comes out as butch, strong and well proportioned. Top-end variants get diamond cut alloy wheels which add on to the sporty quotient. Length is restricted to 3,995mm to ensure that it gets the tax benefits of being a sub 4-metre vehicle.

Hyundai has kept the interior design of the Venue rather simple and neat, and that is a good thing by the way! The centre-piece on the dashboard happens to be the 8-inch touchscreen infotainment system which offers class-leading connectivity features. Front seats offer good comfort and space, but the rear can be a little tight for 3 passengers sitting abreast. Boot too is decent for a SUV of this size.

Hyundai is known for loading its cars with features and the Venue isn’t any different. Top of the line Venue will get a sunroof, cooled glovebox, wireless charging, cruise control, Arkamys’ sound console and some class-leading connectivity technology through Hyundai’s latest iteration of Blue Link connectivity package.

Hyundai will be offering 3 engine options, two petrol and one diesel motor. The 1.4 litre diesel unit (90hp/220Nm) will be mated to a 6-speed MT. In the petrol line-up, Venue will have a 1.2 litre (83hp/115Nm) petrol engine which will be provided with lower variants of the vehicle. It will be mated to a 5-speed MT only. However, the engine which most auto enthusiasts are looking forward to is the 1 litre turbo petrol T-GDI Kappa (120hp/172Nm) which will be offered with a 6-speed MT and a segment-first 7-speed dual-clutch autobox.

The SUV will be launched on 21st May, while bookings have been open since 2nd May, 2019. Hyundai plans to launch the Venue with an aggressive pricing, so much so that it will shock the competition, as well as the buyers. They do not want to repeat the mistake which they made with Santro (launch price of Santro was overpriced, which resulted in lower sales than expected. Hyundai is now planning to launch a cheaper variant of Santro, to boost sales.)

With Venue, Hyundai will offer aggressive pricing from Day 1. Until now, most are expecting Hyundai Venue to be more of a rival to more expensive sub 4m cars like Mahindra XUV300 and Ford EcoSport. But as per dealers, prices will be such, so that it can take on the likes of Maruti Brezza and Tata Nexon. Hyundai has not confirmed this pricing yet. Hyundai will officially reveal Venue prices on 21st May.

If the leaked pricing is true, it will make the Hyundai Venue priced in the range of Tata Nexon and Maruti Brezza. It could possible topple Maruti Brezza as No 1 SUV in the segment. Hyundai has already said that they aim to sell 10,000 units of the Venue every month. This is a huge ask, considering that the segment only sold about 26k cars last month. But with such aggressive pricing, Hyundai could possibly achieve the said sales target. Keeping price of Venue aggressive, will also not affect sales of Creta. With Creta already selling 10k units a month, Hyundai could become the highest selling SUV maker in the country post Venue launch.