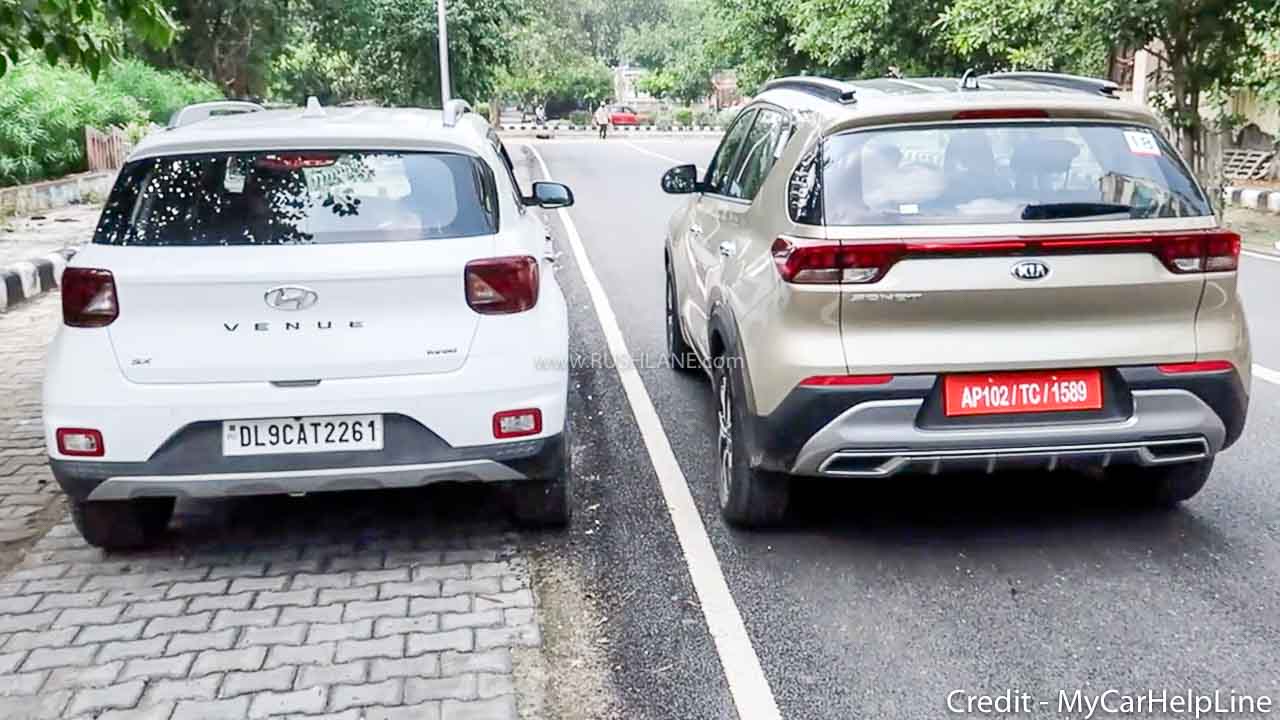 We all know that the Kia Sonet and Hyundai Venue are two different top-hats on the same modular platform. While they have comparable dimensions and footprint the different styling approaches make a lot of difference when it comes to road presence. This video shows the soon-to-be-launched Sonet parked right next to its Hyundai sibling, giving us a fair idea on how they compare with each other.

With dimensional limitations of the segment, making a crossover look imposing is a challenging task. While Hyundai opted for a more conservative yet modern design approach with hexagonal grille and two-part headlamp design, Kia went for a much bolder styling characterized by its trademark Tiger grille, prominent bumper, contoured bonnet and LED headlamps.

This video, credit to MyCarHelpline, makes the Kia Sonet look deceptively taller and more imposing than its Hyundai counterpart but one has to take into account the fact that the Kia was parked on tarmac while the Venue was parked on the shoulder which was a few inches lower. Take a look at the Hyundai Venue vs Kia Sonet video comparison video below.

In profile, both cars are restricted to 4m in length and have a similar visual impact. Coming to the rear, the Sonet again adopts a bolder approach with connected taillights which help to add a sense of width, heavily contoured tailgate and a larger silver diffuser. The Venue in comparison has an understated rear fascia with boxy tailights, a pronounced kick on the tailgate and a thin silver diffuser.

With everything under the skin pretty much the same including equipment level, the choice between the Hyundai Venue and Kia Sonet really boils down to which one appeals to your heart better. Or in other words, which styling approach appeals to you more.

Going by the number of bookings the Kia Sonet has garnered so far, it appears that the compact crossover’s slightly unconventional styling has caught the customers’ fancy. The prices are set to be announced on 18th of September and Kia would be positioning its product at a slight premium over its donor model.

In addition to fighting it out with its own sibling, the new kid on the block will have to face stiff competition from the Maruti Vitara Brezza, Tata Nexon, Ford EcoSport and Mahindra XUV300. Before we know it, the Nissan Magnite and its sibling Renault Kiger will join the fray.