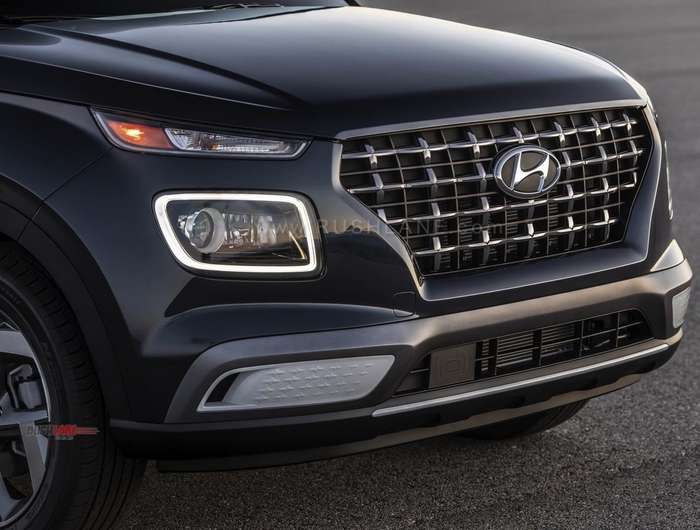 Hyundai has unveiled the new Venue SUV, which is the company’s first offering in the sub 4 meter segment. We compare the Hyundai Venue with rivals in the segments. Hyundai Venue vs Mahindra XUV300 vs Tata Nexon vs Maruti Brezza vs Ford EcoSport in terms of dimensions and engine specifications.

Tata Nexon is shorter in length as compared to the Venue and Brezza at 3,994mm but wider at 1,811mm. Height is also more than that seen on the Venue at 1,607mm but lower than the Brezza while wheelbase is the smallest from among its competitors at 2,498mm. 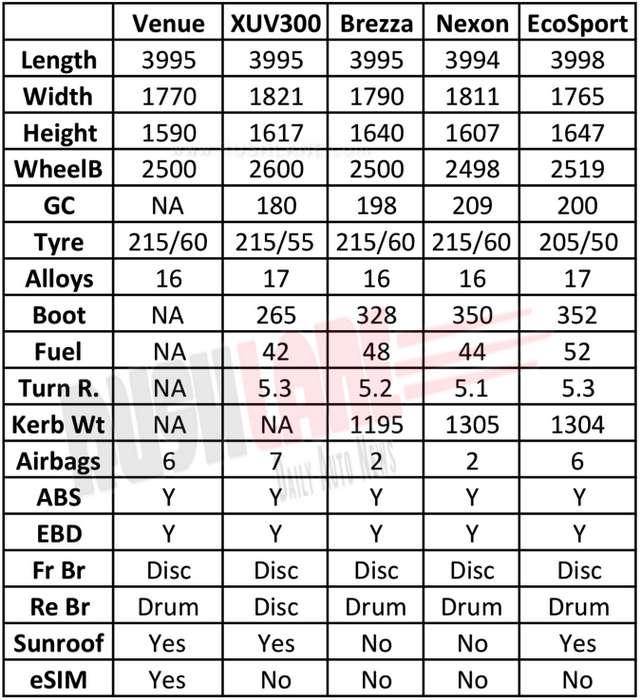 Mahindra XUV300 also measures 3,995mm, the same as the Venue and Brezza. Width is at 1,821mm making it the widest in its class which contributes to better interior space while height is at 1,627mm. Wheelbase measures 2,600mm. The Ford EcoSport is the longest at 3,998mm and highest at 1,647mm with the longest wheelbase at 2,519mm. However it is the least wide among its competitors at 1,765mm. 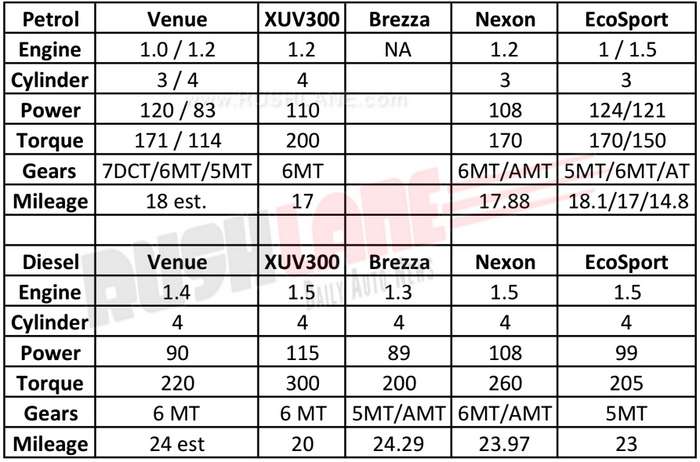 Maruti Brezza is the only SUV among its competitors that is offered exclusively with a diesel engine. This 1.3 liter diesel engine offers 90 PS power and 200 Nm torque mated to a 5 speed manual and AMT. The Hyundai Venue on the other hand has the least powerful diesel engine as compared to the Nexon, XUV300 and EcoSport but on par with the Brezza in terms of power but torquier than that offered by the Brezza diesel engine.

Features and Technology – Hyundai Venue, being the first connected SUV to be sold in the country, will score over all its competition in terms of technology with a long list of connected features. It comes in equipped with an eSIM offering vehicle settings via a mobile app which will include remote engine start, AC control door lock and unlock and other features in the case of an emergency to contact emergency services and inform emergency contacts.

Touchscreen Infotainment – Each of the competitors in the sub 4 meter SUV segment get touchscreen infotainment system compatible with Android Auto and Apple CarPlay. However, the screen is the largest in the EcoSport and Venue at 8 inches, unlike the 7” units seen on the Brezza and XUV300 while Nexon gets a 6.5” unit.

Safety – In terms of safety, the Hyundai Venue is on par with its competition. It gets a total of 6 airbags. XUV300 and EcoSport come in with 7 and 6 airbags respectively and the Brezza and Nexon which only get 2 airbags as standard. The Mahindra XUV300 gets front parking sensors and all 4 disc brakes as first in segment safety features. Only India-spec Maruti Brezza and Tata Nexon have been crash tested yet, getting 4 and 5 star rating respectively. Others have not been crash tested.