Cruiser motorcycles in addition to their relentless long distance touring prowess have the knack to offer dollops of road presence- an eyeball magnet that leaves you feeling as the lord of the streets. And while cruisers are largely about copious chrome, there are a few that do the same sans the gleam in their own sinister ways- the Indian Chieftain Dark Horse is one such specie. The colossal proportions and the baleful bearing it carries, and then being decked with a long feature list- it’s nothing short of a road going Godzilla. We rode this burly behemoth over a period of three days and it did make us feel like a celebrity every single time we took it out for a spin. As for the rest of our experience- we’ve got it all covered in our Indian Chieftain Dark Horse Review. 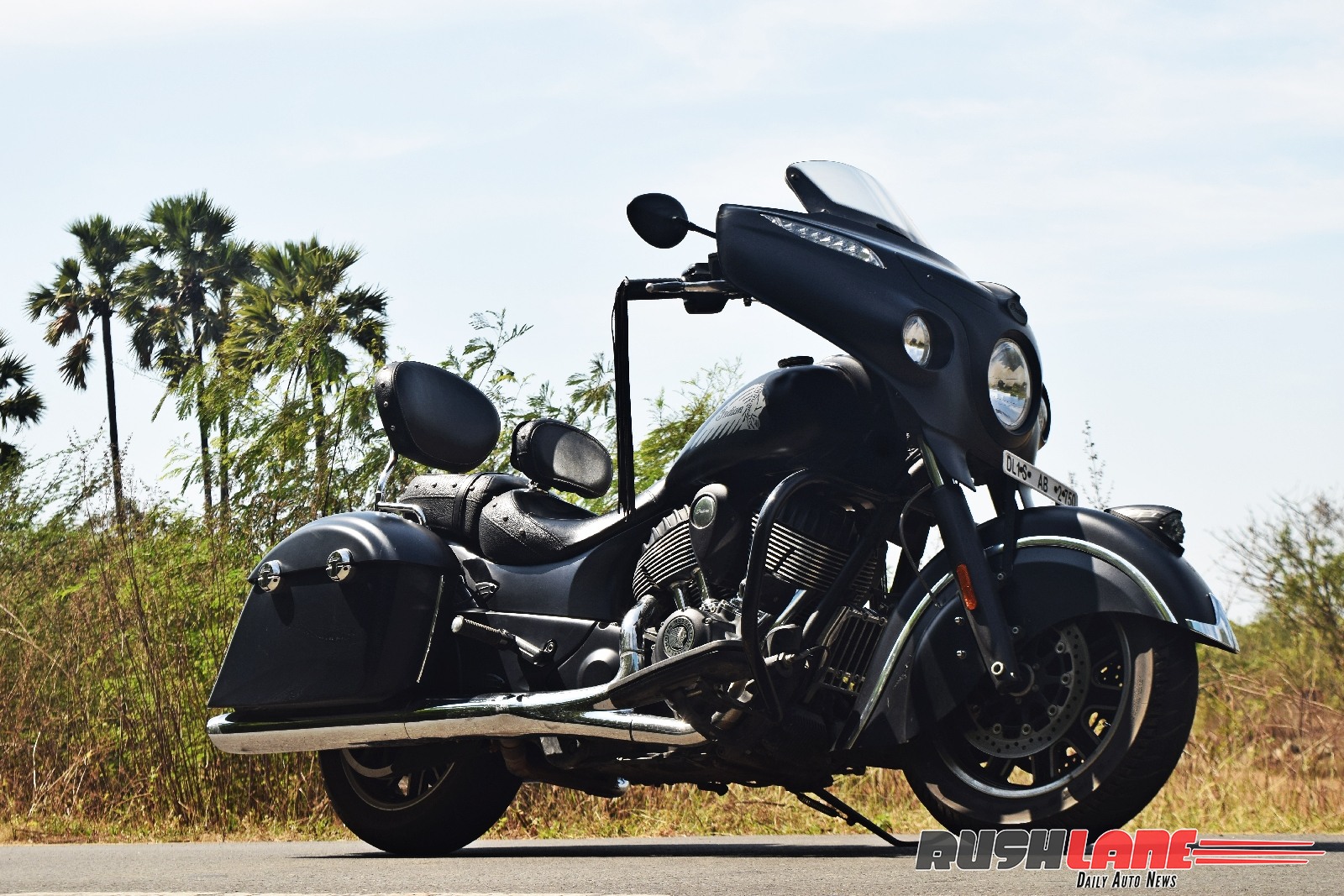 This Chieftain’s appeal lies in its sinister massiveness. Intimidation would be an understatement if one has to expound its attributes- but then it’s alluring. It’s a prodigious yet gorgeous sculpt on two wheels. Though it’s essentially a Dark Horse with outsized touring essentials or rather a Chieftain with blacked out treatment- it hard to disagree that the motorcycle is such an inescapable eyeball magnet.

So instead of writing a load of text delineating the aesthetics and the equipment on the Chieftain Dark Horse- we believe the motorcycle deserves a detailed pictorial feature list. 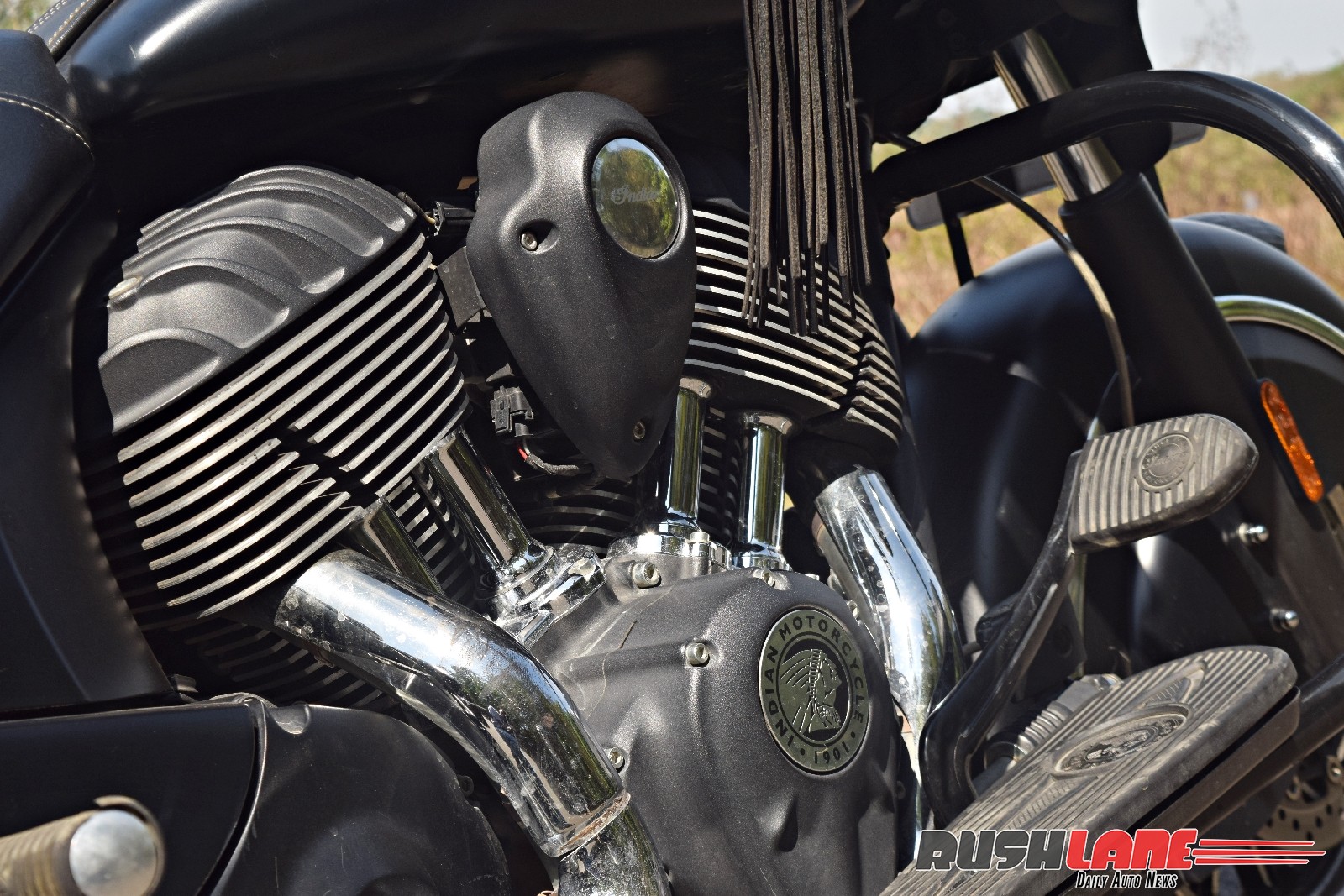 The prodigious Thunder Stroke 111 v-twin with 1811 cubic centimeters of displacement. 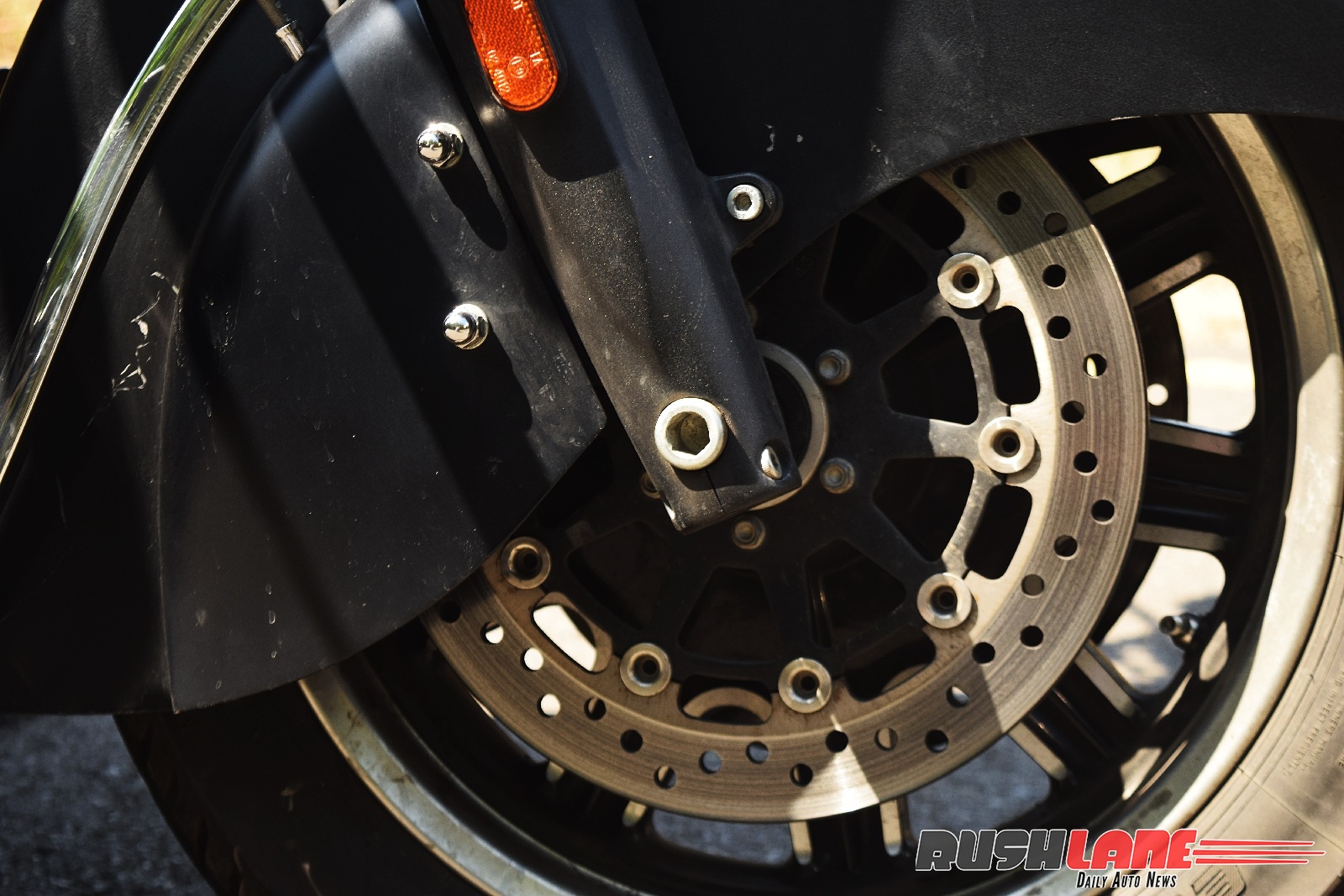 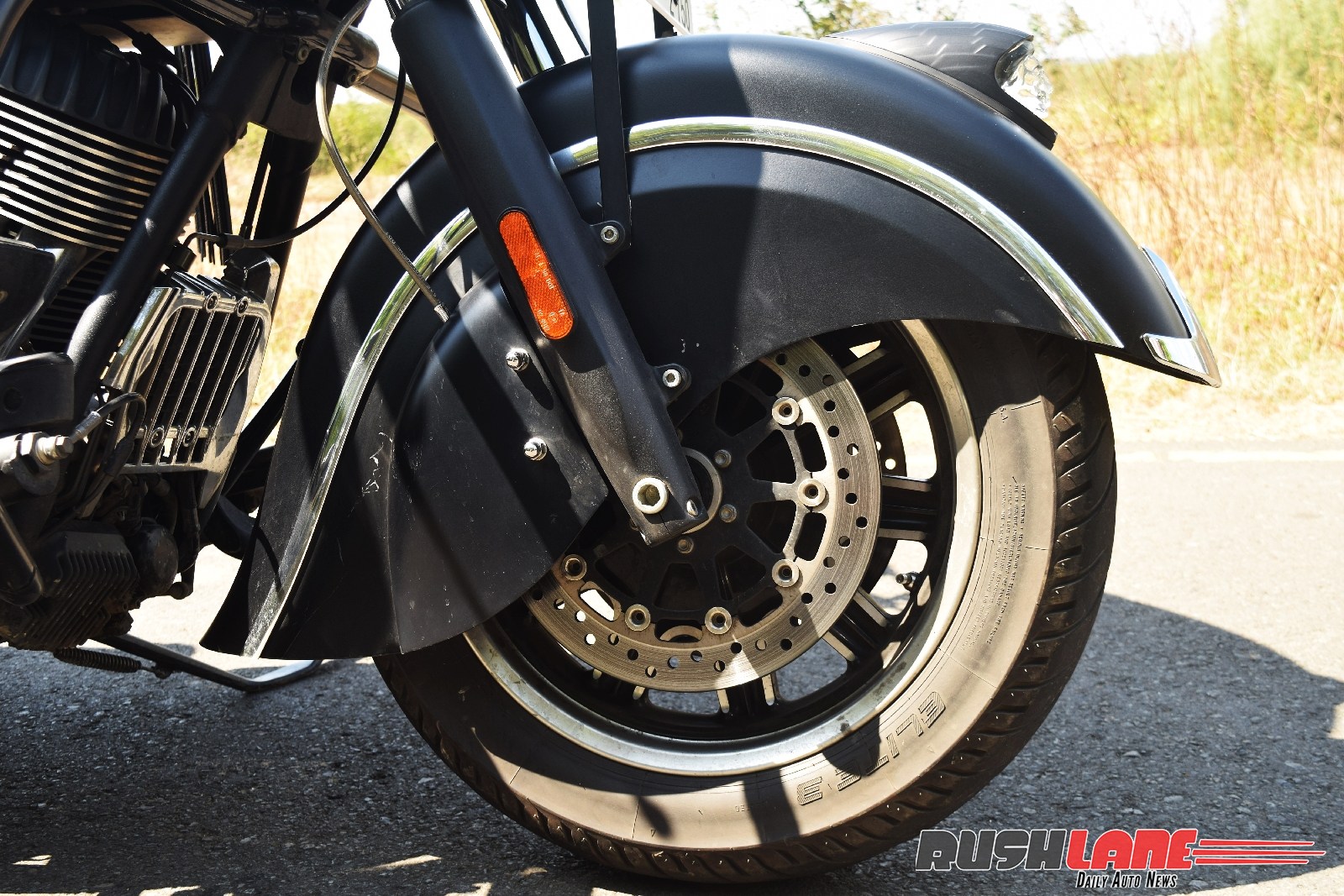 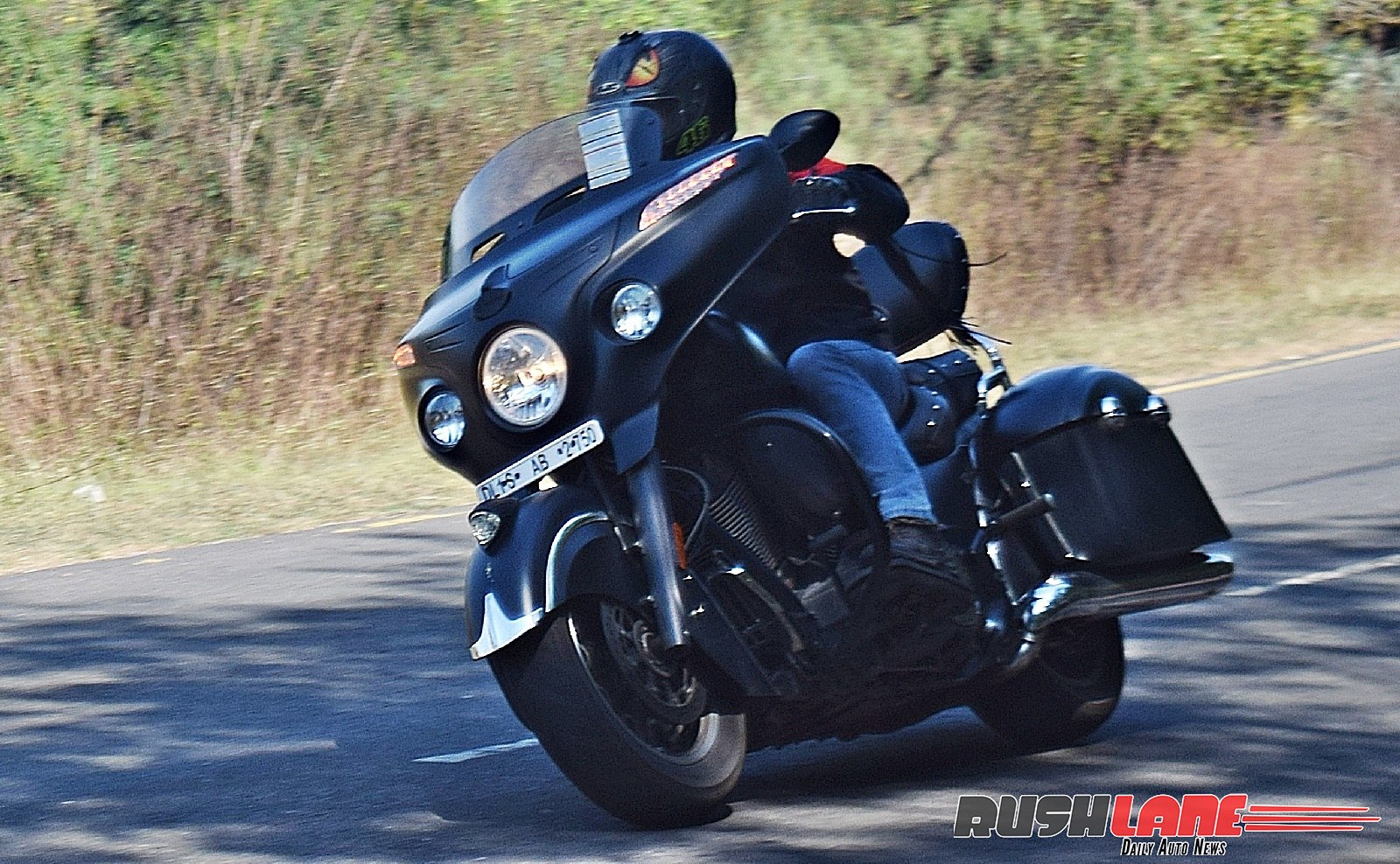 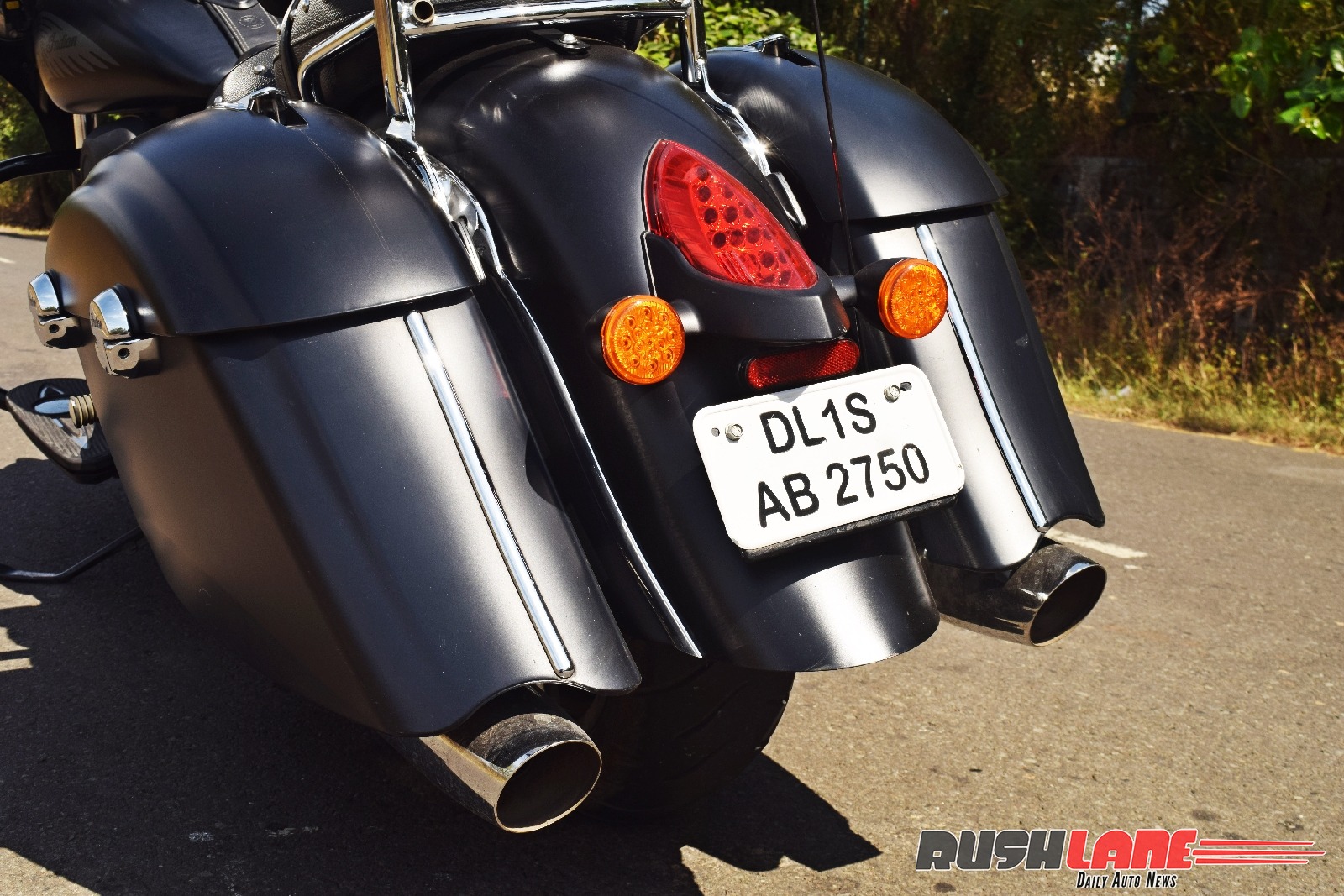 The split dual exhaust with cross-over emanates a thundering symphony of sorts.

The 20.8 litre fuel tank should stretch to over 300 kilometers before you start hunting for a refueling bunk. 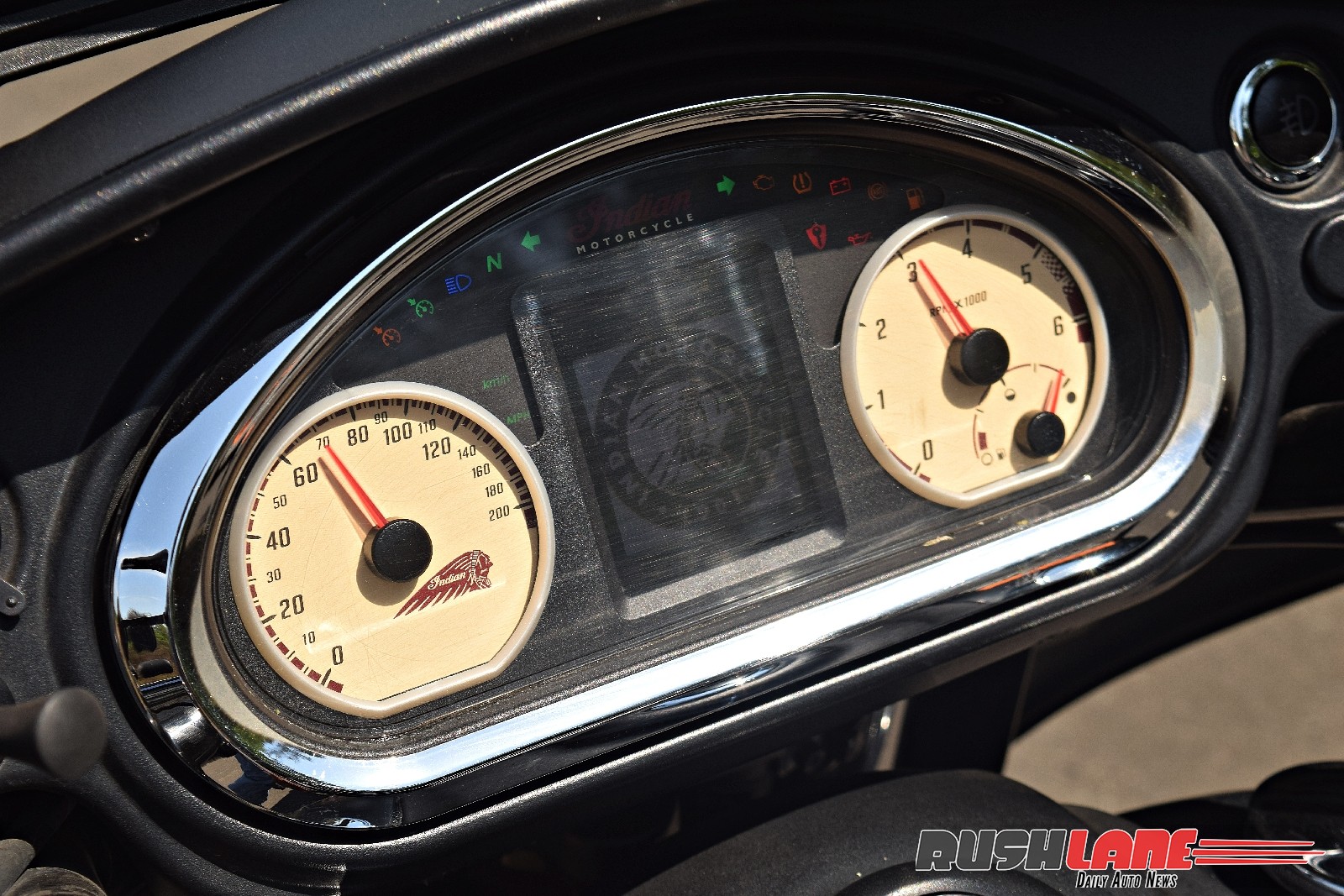 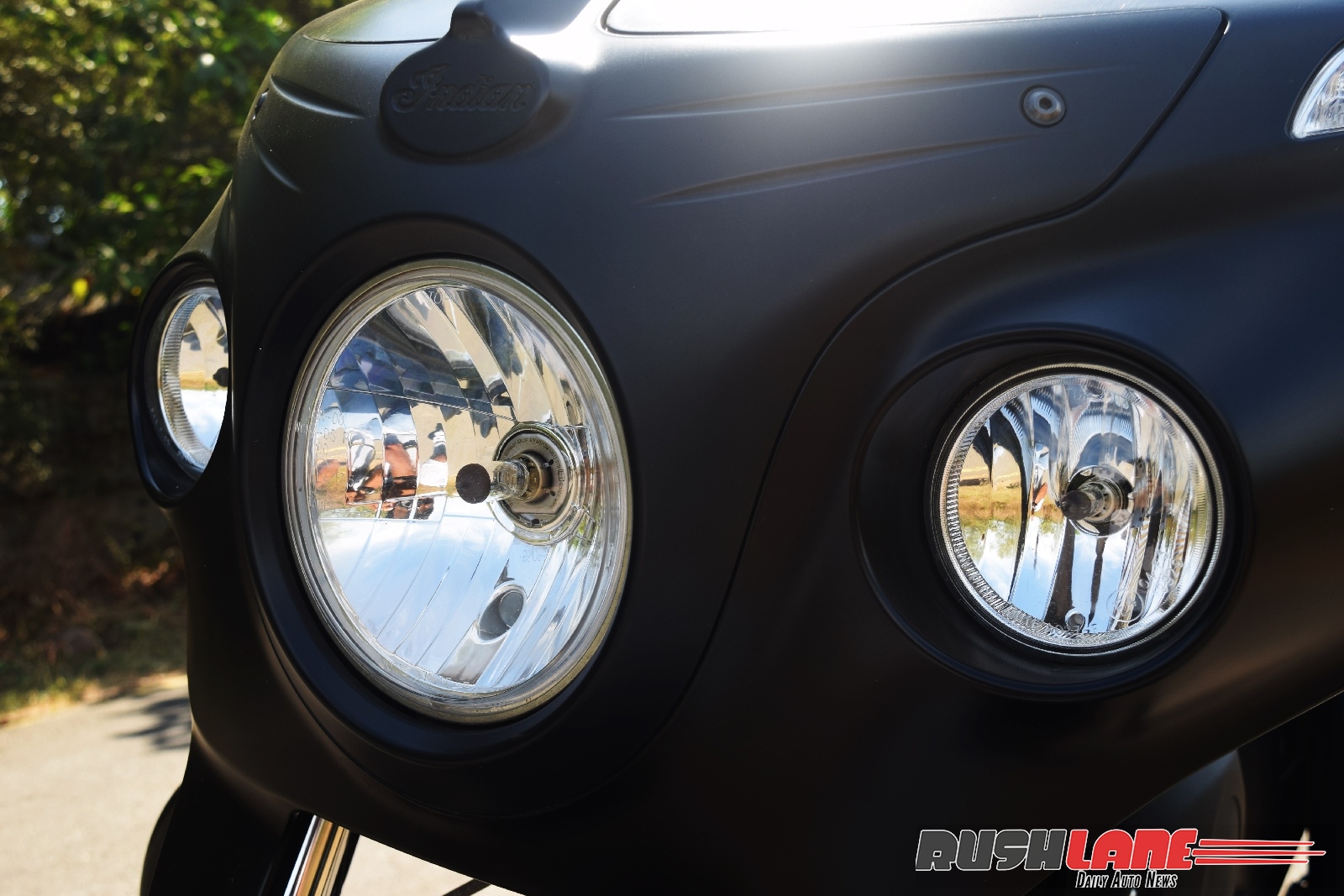 Triple driving lights offer adequate illumination and spread during night rides- but as long as the oncoming drivers are considerate. 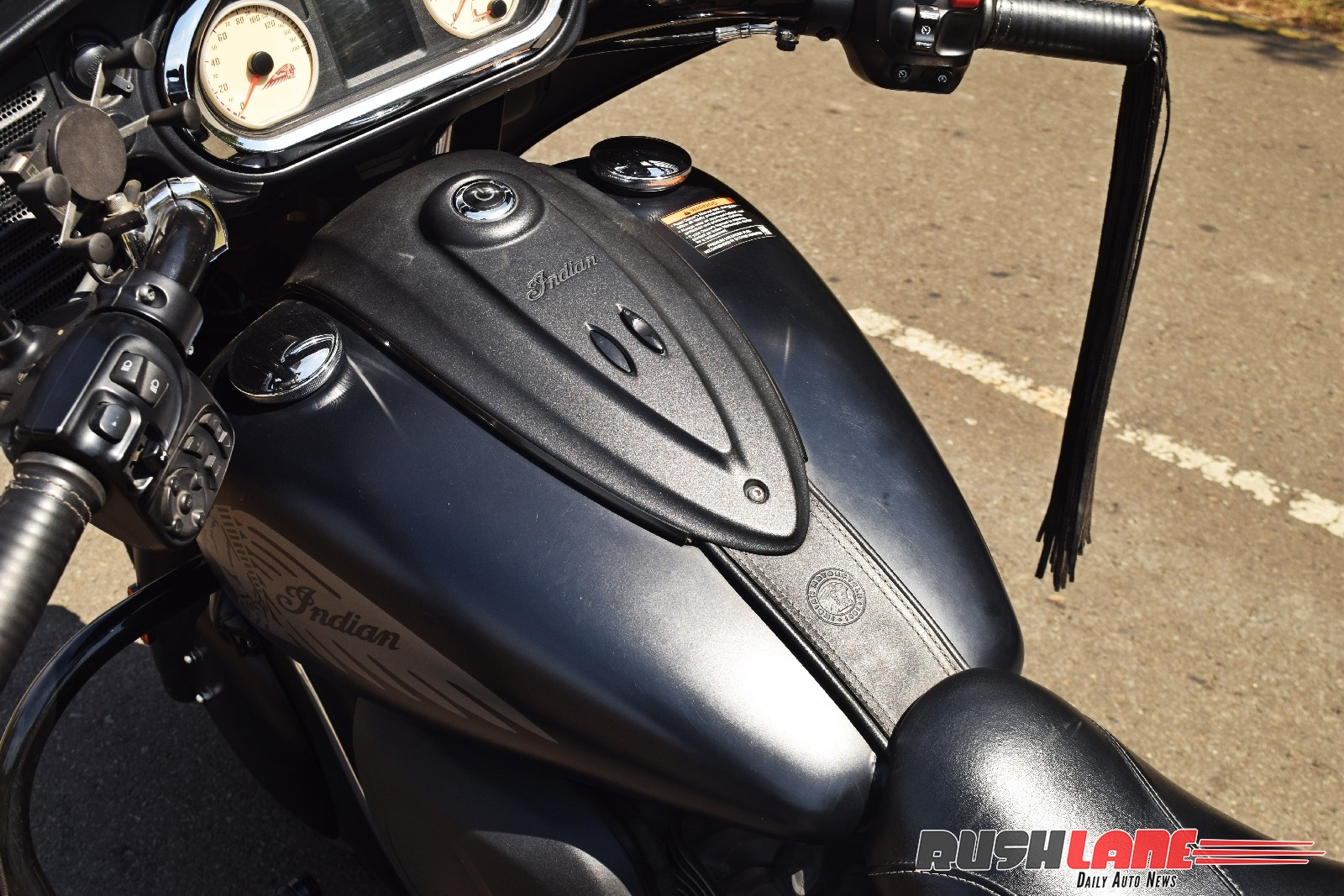 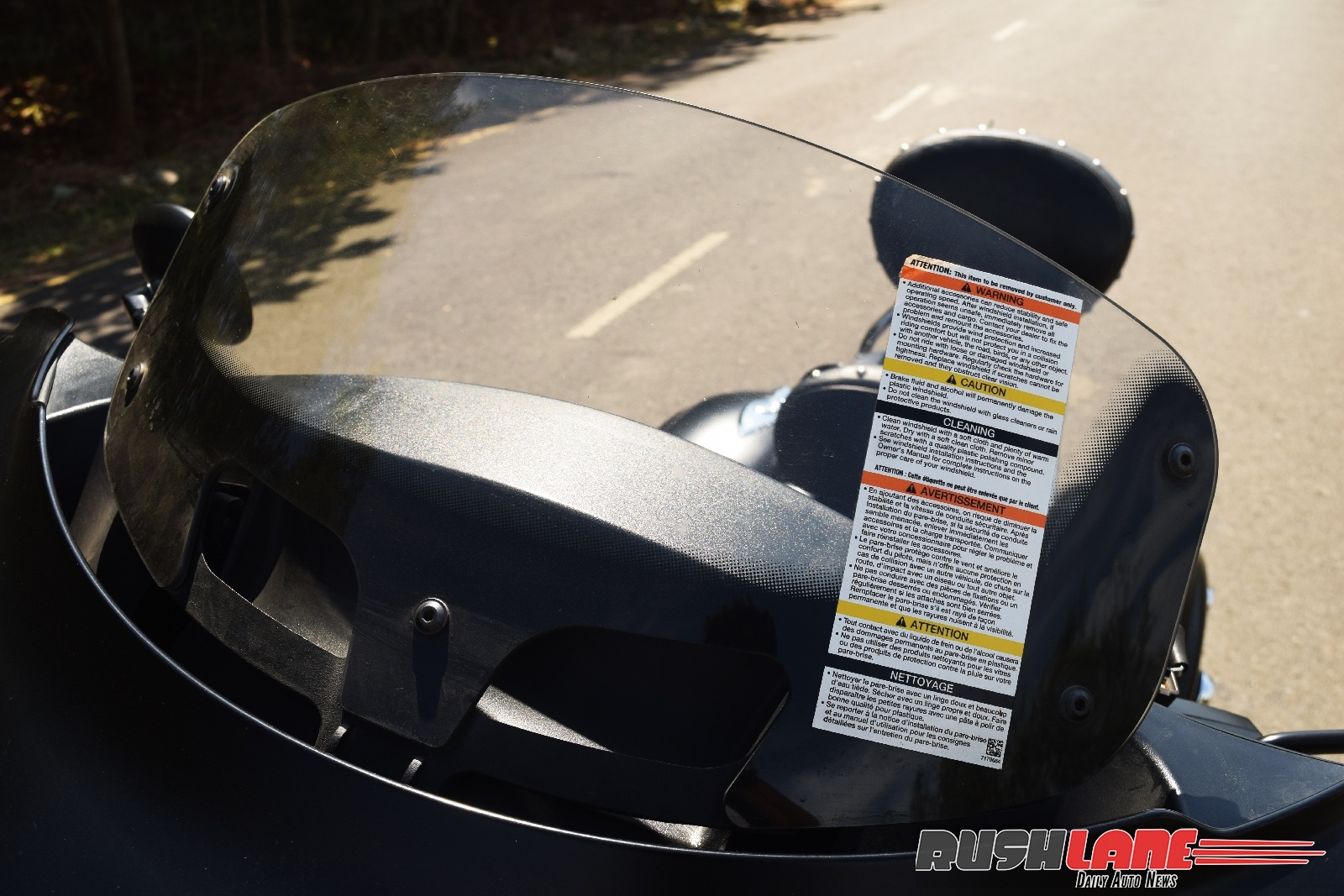 Power Windscreen that can be easily operated with left-hand controls. Simply lower down while trundling around the town and raise it when you hit the highways. Also it ensures that the music blaring out of the speakers isn’t diluted in the wind stream. 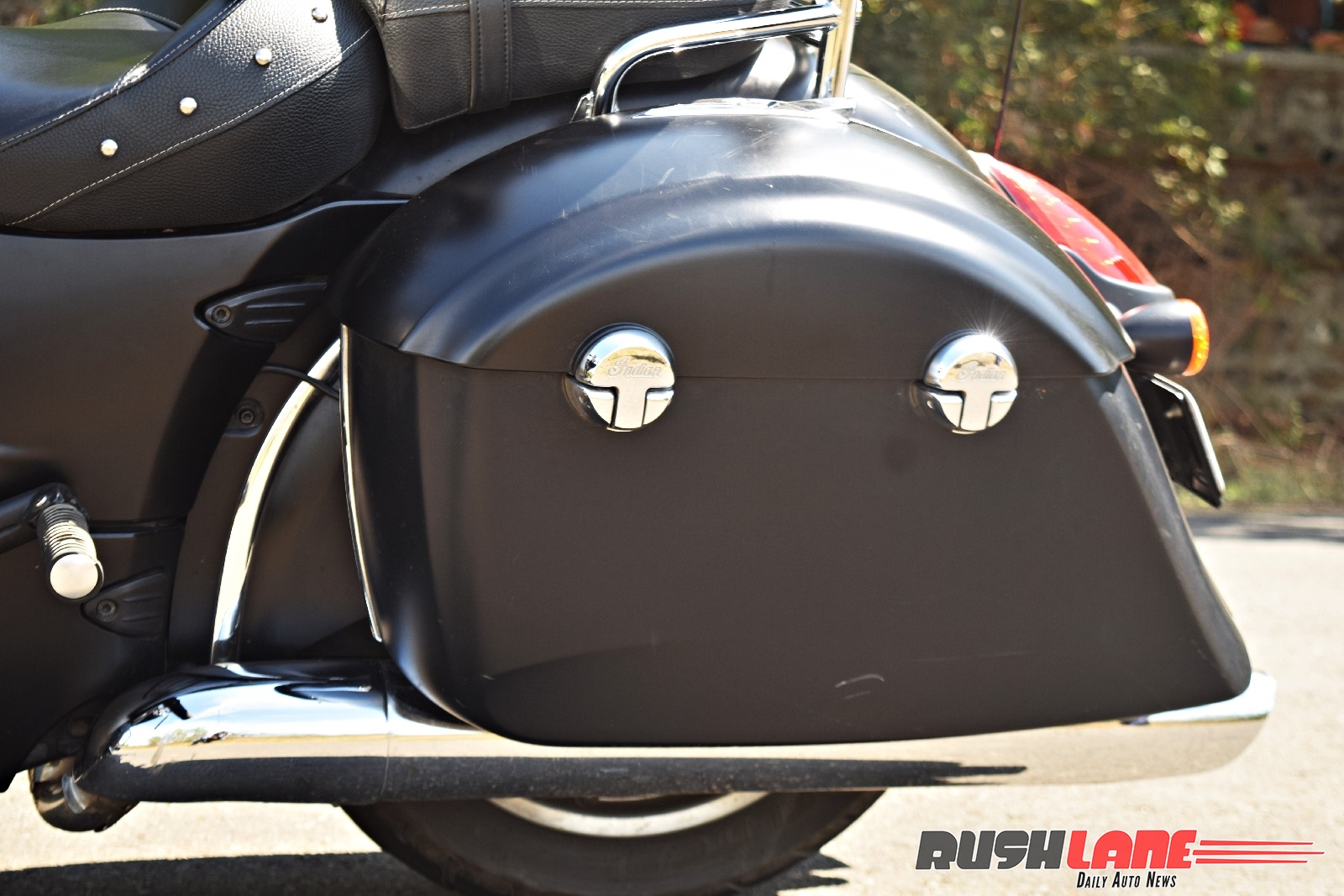 Lockable saddlebags have enough capacity to carry necessities for a weekend outing. The saddlebags could also be unlocked with the remote FOB key and tank mounted switches. 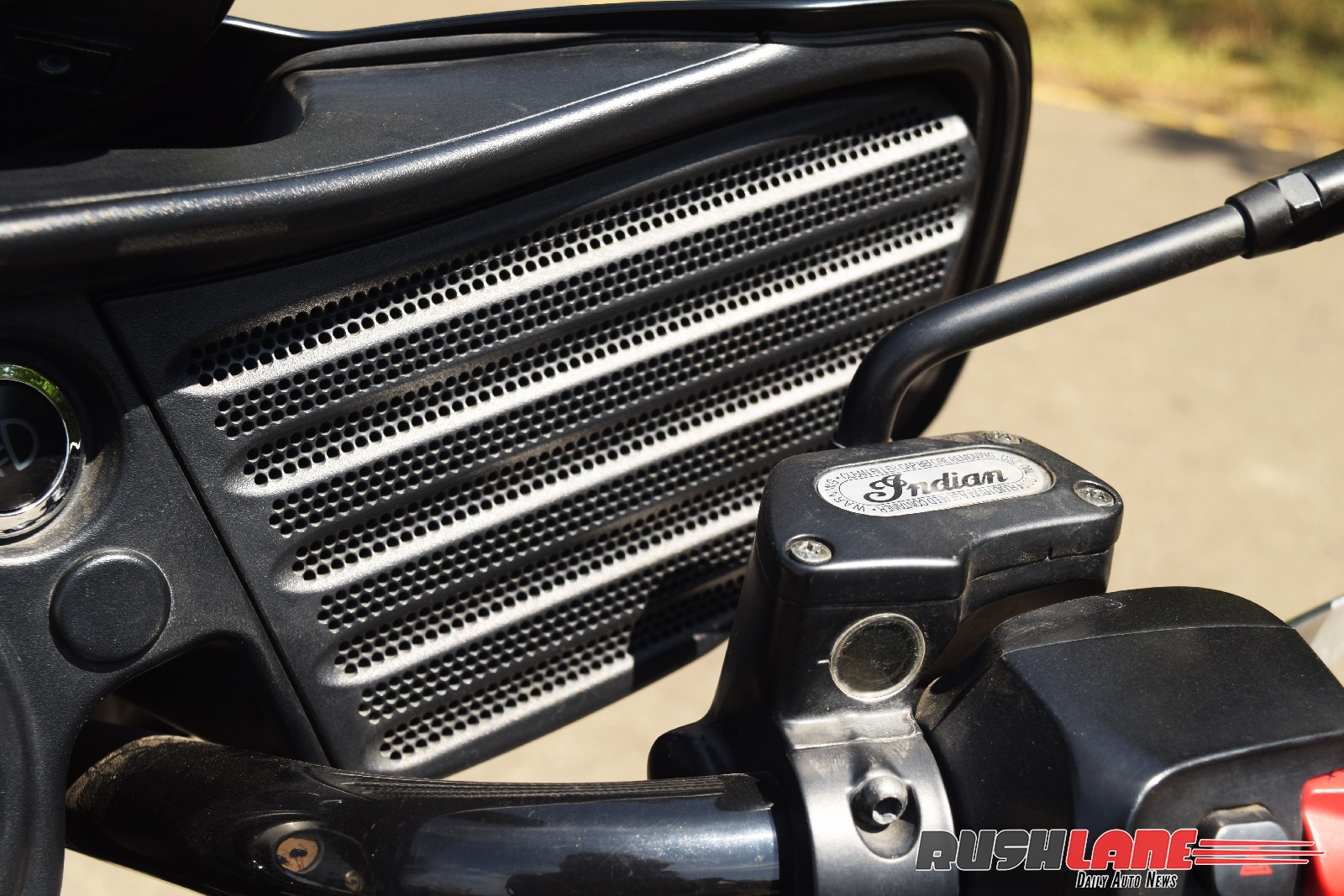 100 watts Audio system (USB + Bluetooth input) with FM Radio to spice up to your journeys. 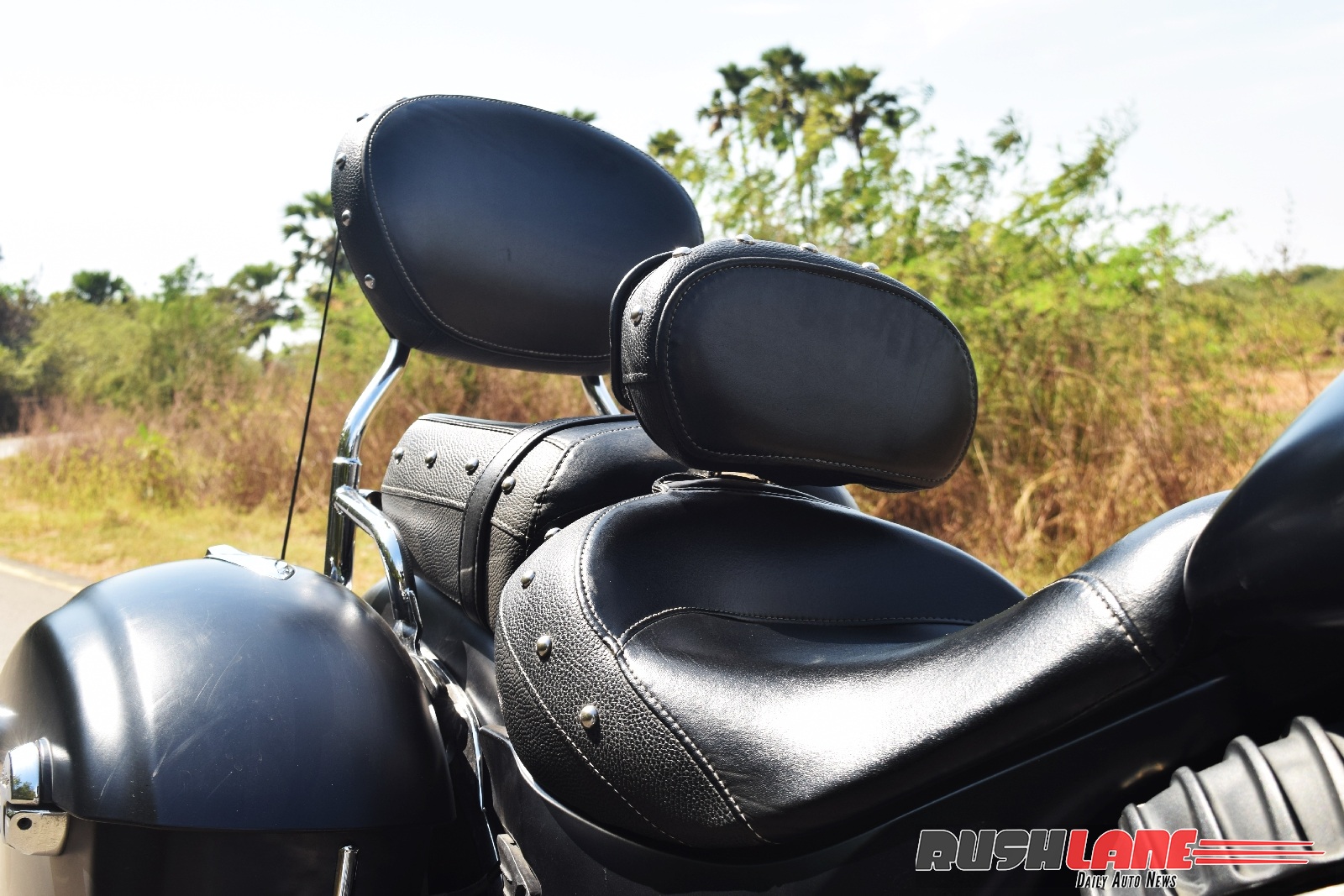 The rider and pillion seat both offer high levels of comfort for any lengths of riding. 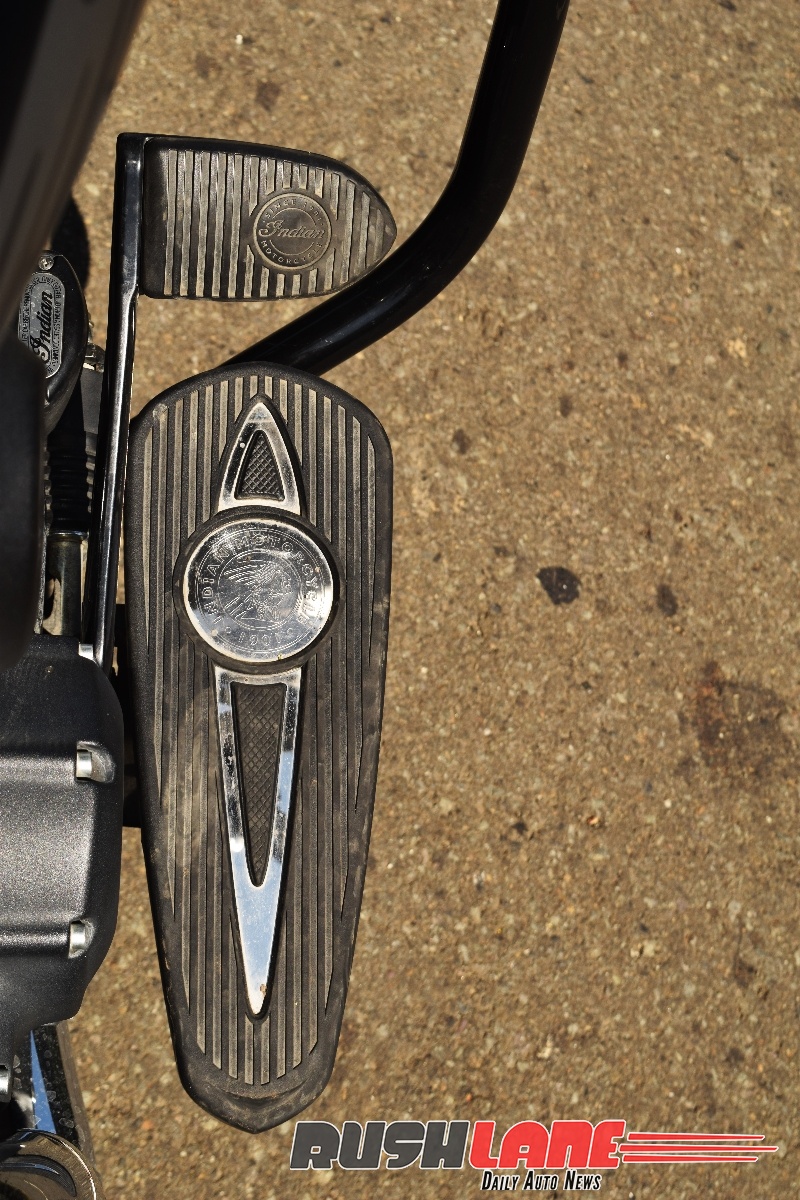 Footboards offer generous space to move your feet around- just in case fatigue kicks in. 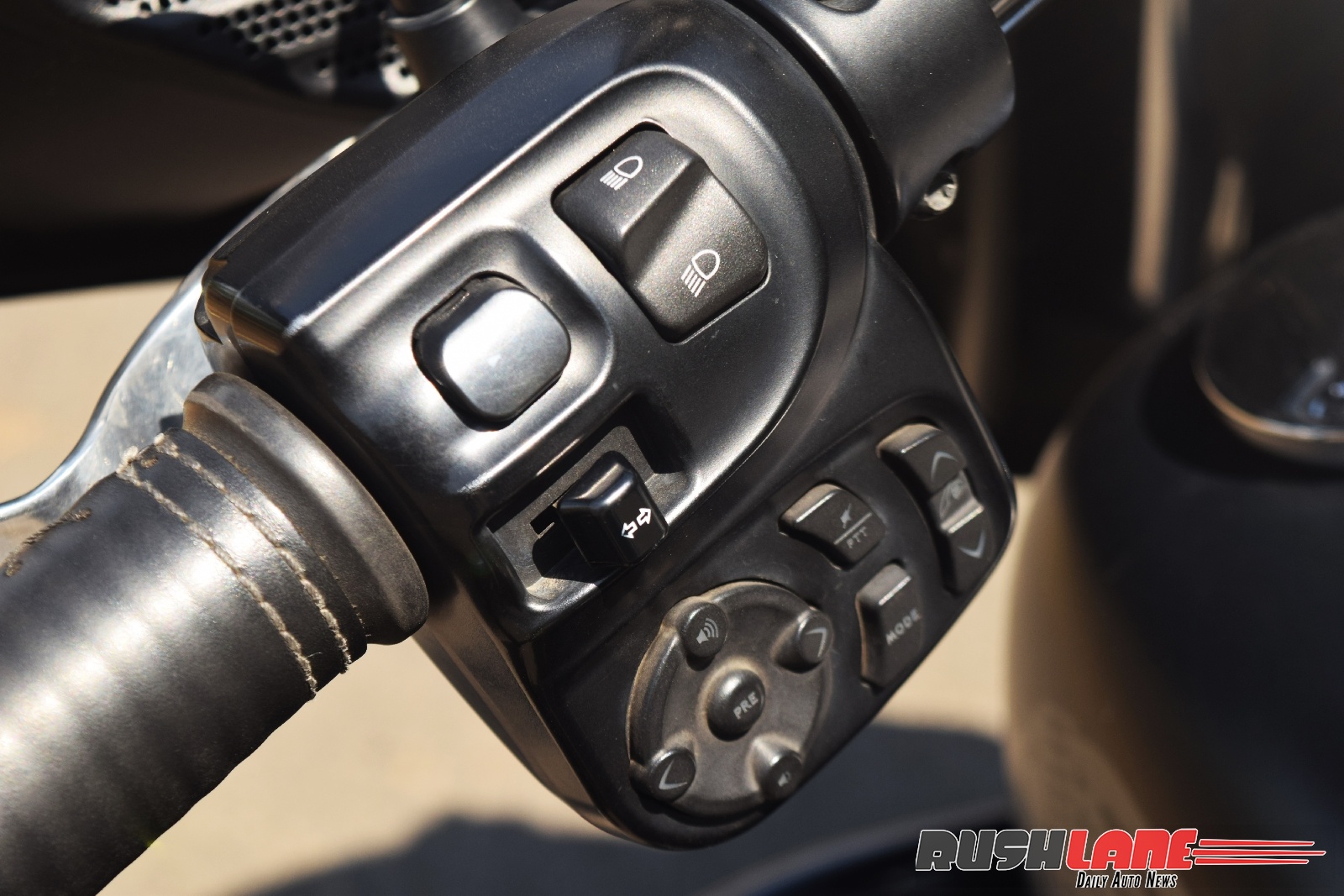 Switchgear build quality is top notch with user friendly controls– switches which can be operated without the need of taking your hand off the grips. 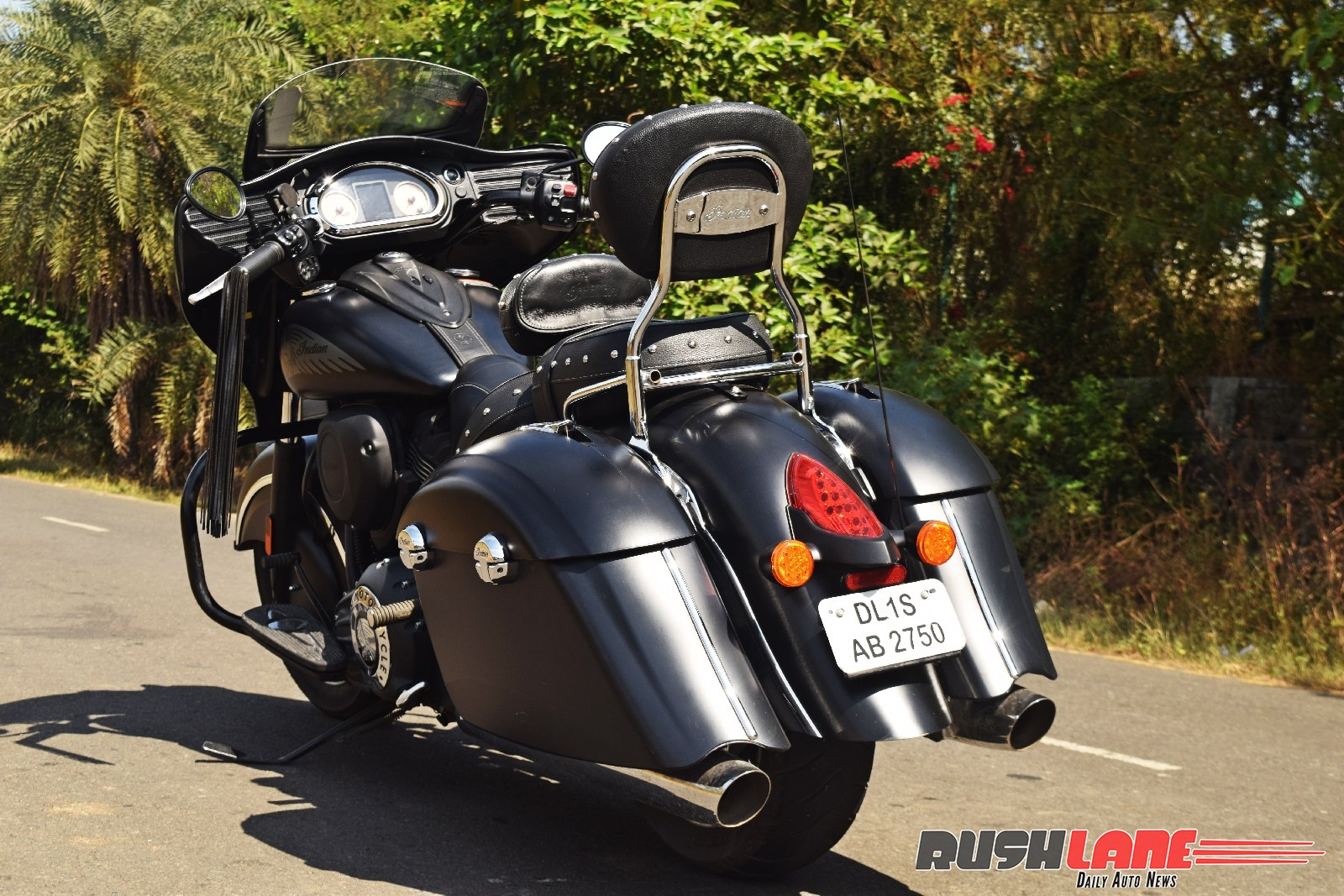 Build quality is top notch as expected from the Indian Motorcycles stable- though the review bike did have a few squeaking and thudding panels while hitting undulations, understandably so as it was a 2016 model and ridden by numerous publications before we got our hands on it. Even a trained eye would find it difficult to pull out any unpolished space on a motorcycle which boasts of high build worksmanship. 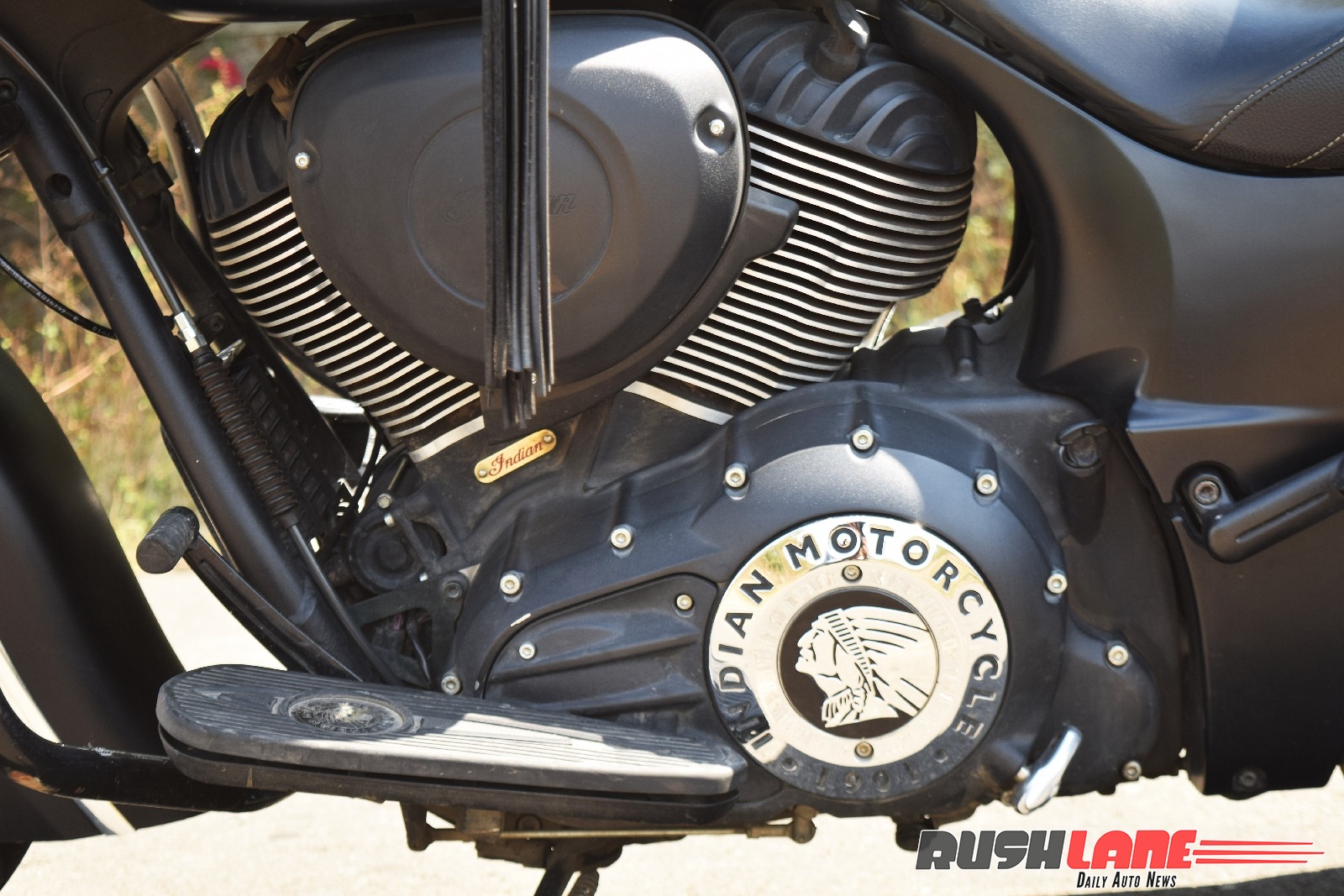 The Thunder Stroke 111 V-Twin with 1811cc displacement might not offer ground-shattering horsepower belting out 73 bhp @ 5075 rpm, but enough twisting force to the rear tyre rated of 138.9 nm @ 2600 rpm. Despite the capacious figures- the motor as is the case with Indian motorcycles, feels extremely eager and revs in a scurrying manner for its genre. Vibrations are surprisingly low for a buirdly engine and it in fact feels quite refined throughout the rev-range. The Chieftain Dark Horse sustains its composure irrespective at what revs the needle travels to- with only the exhaust amping up its dissonance. The gears seem well spaced out and acceleration feels consistent across the box with no signs of flat spots anywhere. 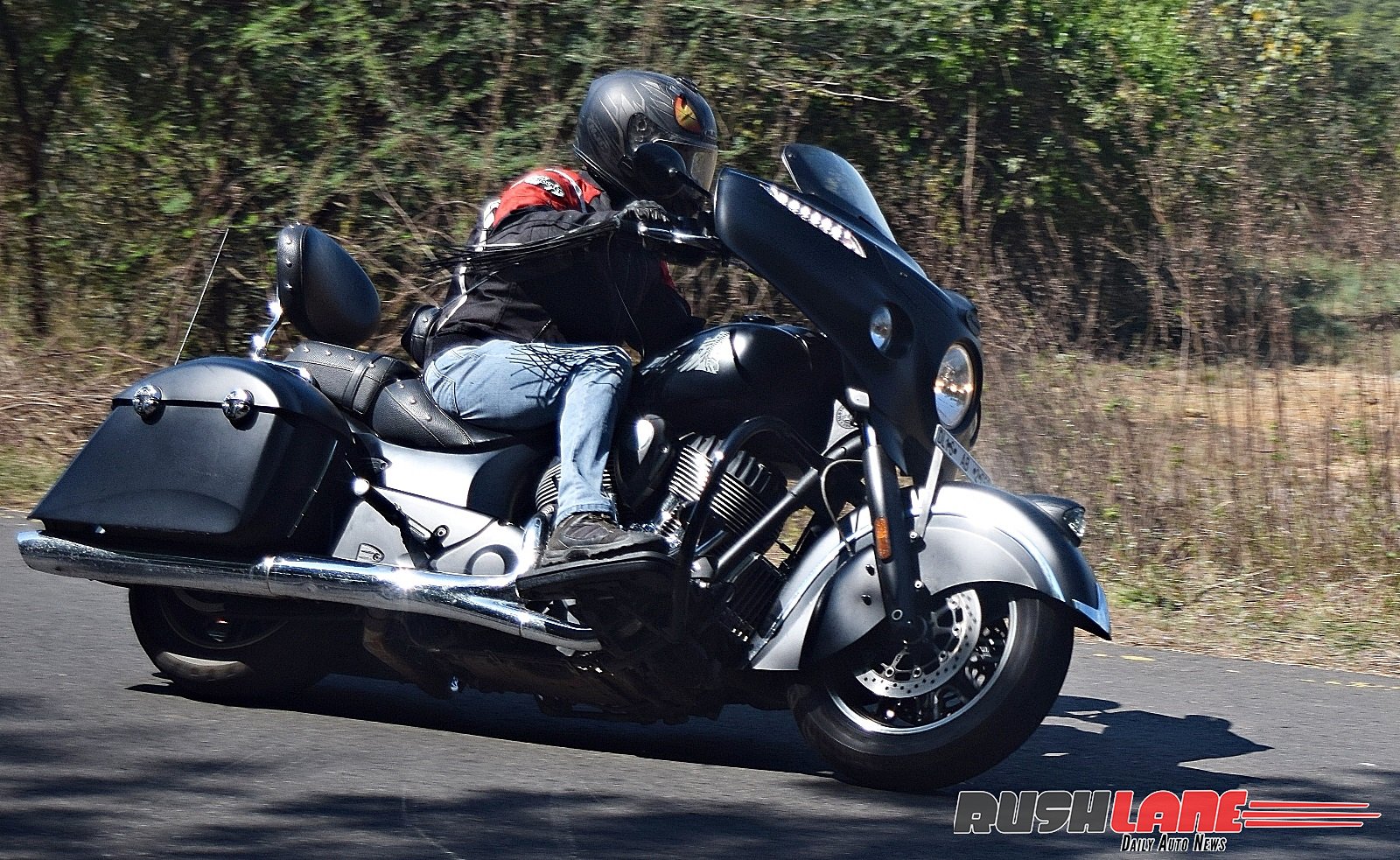 The gearbox is smooth- again for its category and sans the clunkiness of the first gear that’s actually a norm with high capacity motorcycles, shifting is smooth and finding neutral was the easiest of affairs. Push the needle past 4000 rpm before while shifting and the near 400 kgs motorcycle (380 to be close) transmutes into a fervent rhinoceros armed with the attitude of a gazelle. Every shift on the transmission and the motorcycle grabs your attention to the word “horse” in its epithet wanting to prance the front wheel up- but the mass is way too overwhelming (thankfully). The only irritation was the hard clutch- operation of which turned out to be a tedious activity while wriggling through peak hour traffic. 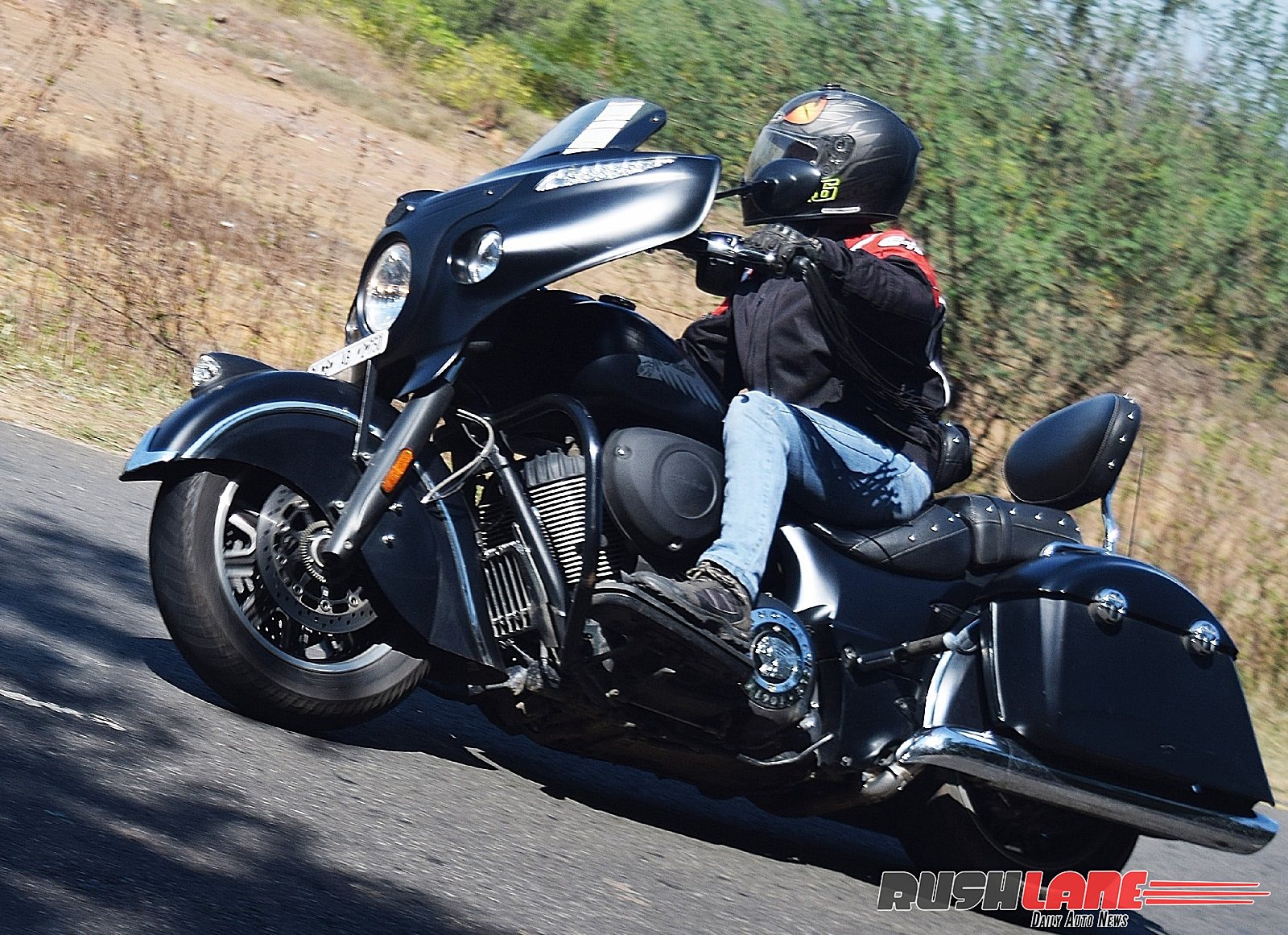 Handling is another hallmark of the Indian range of motorcycles- we’ve ridden a couple of the Dark Horse’s stable mates, and this one is no different. It certainly is a daunting motorcycle to get off the stand and nothing less than a leg day workout if you plan to move it around being on the saddle in idle. However fire it up and it seems to have shed more than half its mass. The monumental proportions do get your anxious observance- but concentrate on the dynamics and it feels an absolute delight realizing how easy it is to tame the monster with your right wrist. 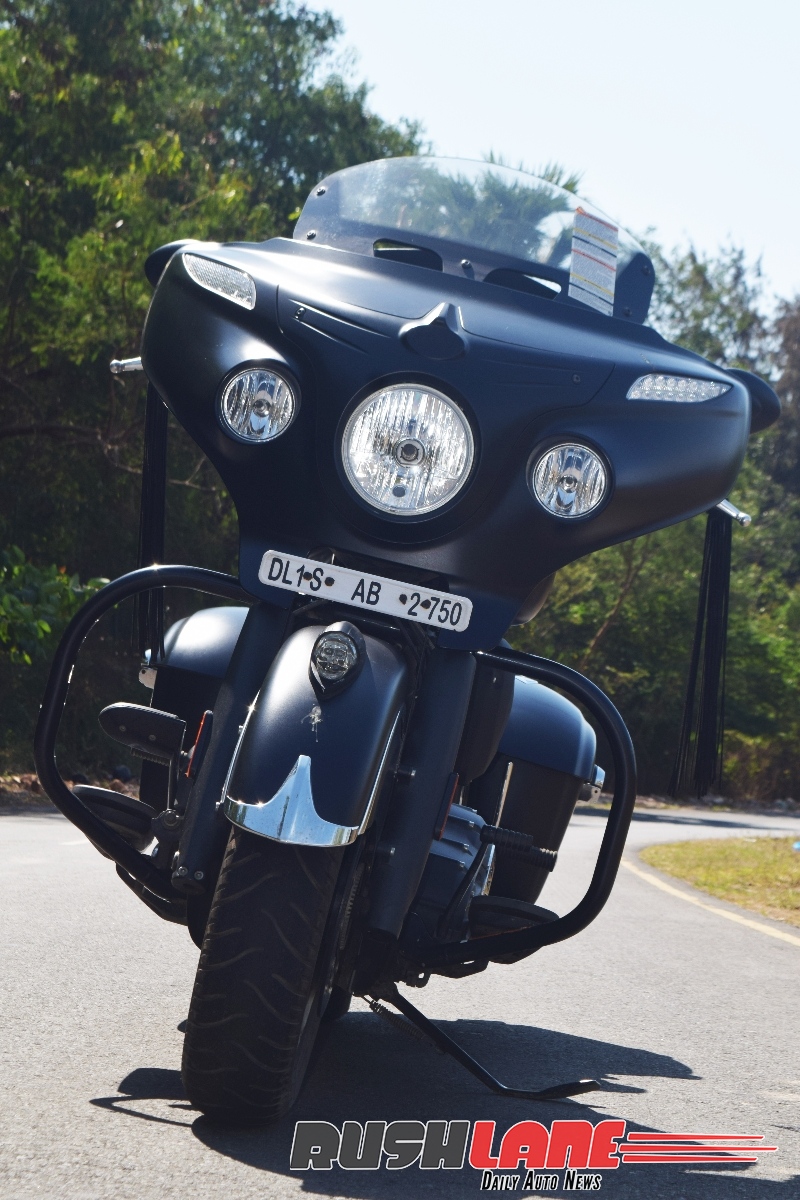 The balance is bewildering when pottering around with straight-line high speed cruising as immaculate as you’d want. The 180 section rear tyre digs harder into the tarmac while the front would hardly waver from your decided line of travel. The Chieftain Dark Horse feels an exceptional motorcycle when it comes to tackling the twisties- it retains the handling DNA one would affiliate to the Indian marque. The motorcycle feels telepathic to steering inputs with directional changes happening without much fuss. The test bike did had a few front end issues- we guess the coneset which would send the Dark Horse with a tram lining front. Also a few bumpy corners did upset the handling with a wee bit lateral movement- but smoother surfaces and the motorcycle displayed it’s sure-footedness at leans angles where most cruisers start grinding the tarmac. Plus the rear suspension is adjustable adding more clearance between the road and the motorcycle.

But if we had to put a finger on the Indian Chieftain Dark Horse- it has to be the brakes. Despite a twin disc braking setup, we were disappointed at the subdued front end bite. If the heavy clutch was an infliction for the left hand- the brakes ensured that the right hand wasn’t spared either. It would demand a hard squeeze on the lever and high speed braking wasn’t a very pleasant experience. Thankfully the rear brake served as a saving grace providing ample stopping power with minimal effort. The rear tyre showed great composure under hard braking when we would slam the rear to shed speed in a hurry. ABS was un-obstructive and kicked in for rescue operations only when the hard braking turned out to be too overwhelming for the grippy rear tyre. 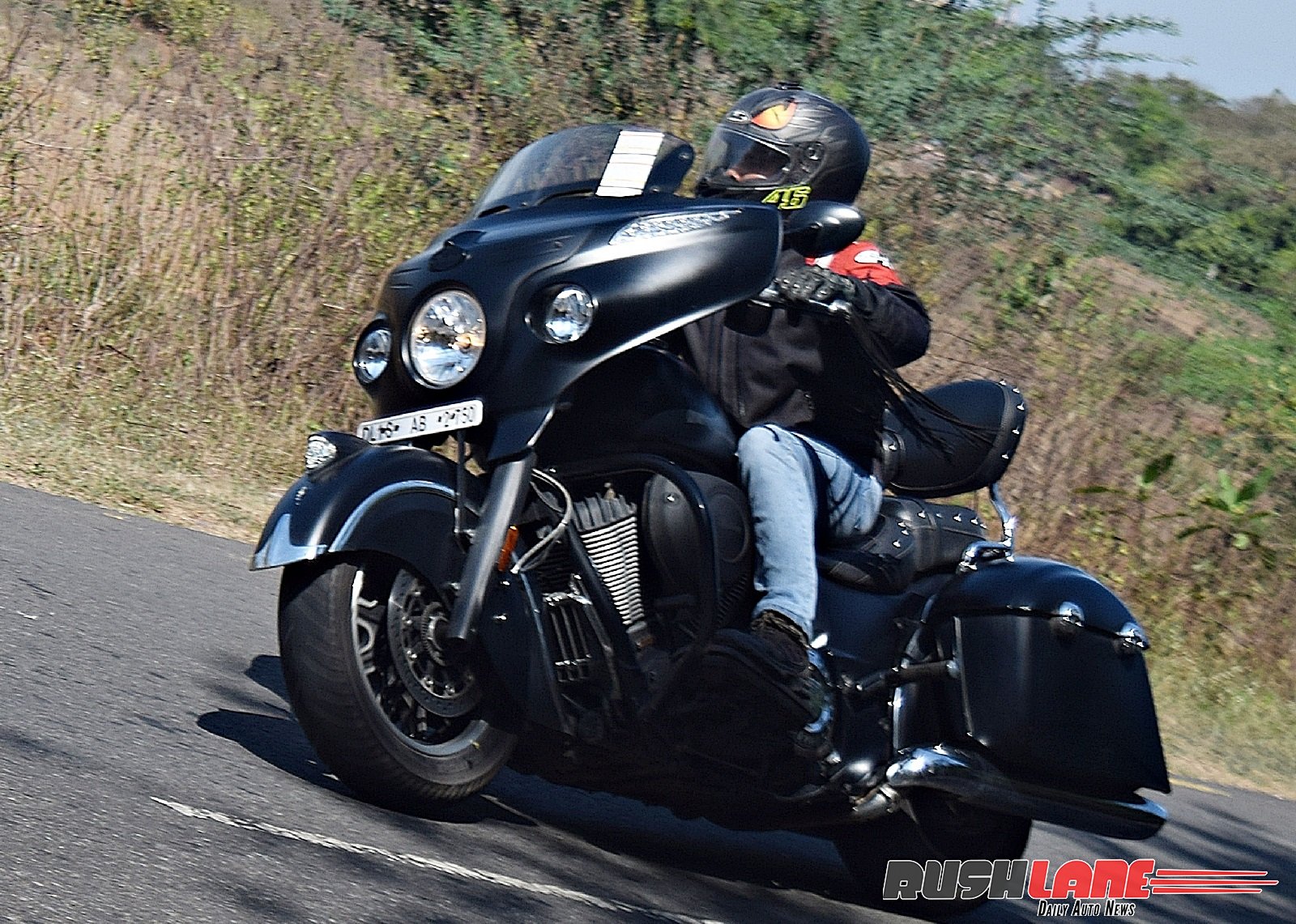 Ride quality on the Chieftain Dark Horse is “LUXURIOUS” with a wide and well contoured saddle to accommodate riders of all sizes. A small backrest to the rider’s seat extends added comfort and the co-rider too isn’t deprived of creature comforts with a broad cushy seat and a high backrest that offers great support during two-up long hauls. The massive fairing and the electronic wind screen keeps the rider guarded from the wind drag, but buffeting does sneak through from top of the screen into the top half of the helmet shooting north of 120 kph. Suspension at both ends offer enough resistance against undulations with the seat keeping you well insulated from jittery surfaces. 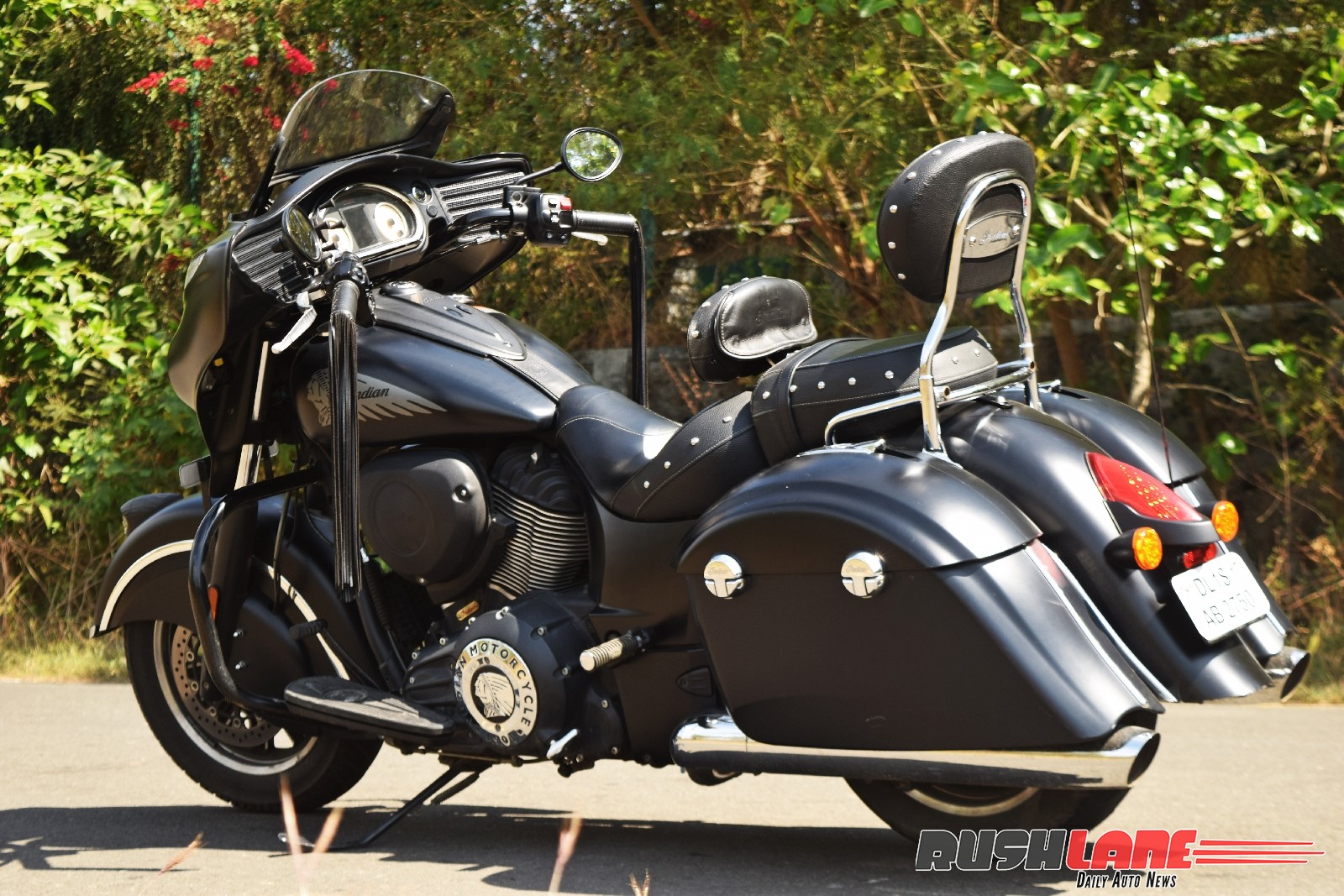 The Indian Chieftain Dark Horse is your ticket to instant street stardom- but that isn’t what it’s only meant for. It’s a highway star and highways are where the motorcycle shines through most. It would yawningly make mockery of long distance motorcycling offering luxurious ergos while you relish on the drumming symphony of the colossal motor nestled between the frame. The overall balance is astounding for a motorcycle of its size and comes loaded with most of the bells and whistles you would wish for on your touring endeavors- whether solo or two up. The build quality is spot on and except the soft front braking- there’s absolutely nothing really to complain about. Not always do good things come in small packages- and the Indian Chieftain Dark Horse is one package offering all the goodies in the grandest of schemes. 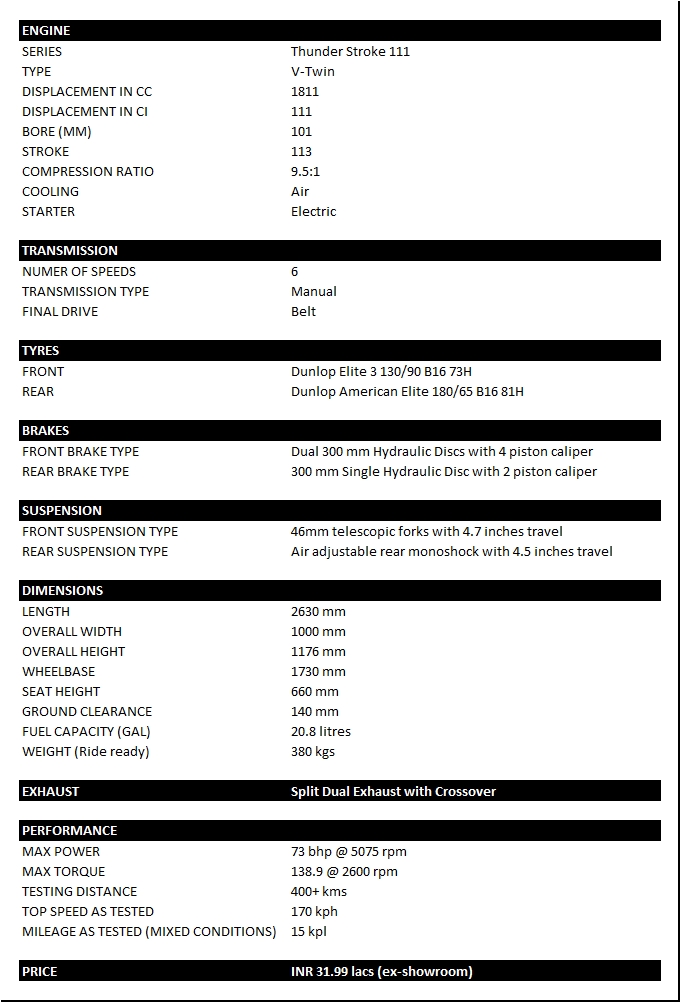