Home Car News Driver apprehended for wrong side driving found to have pending challans of... 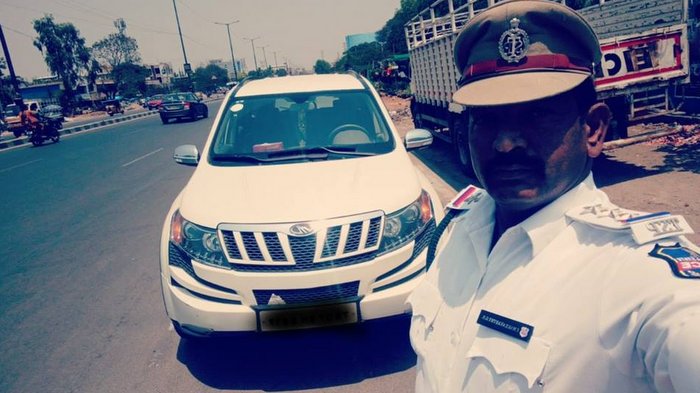 An update from Cyberabad traffic police reads as follows, ‘Detained a Car for driving in the wrong direction and having pending challans of 35760/- in the limits of Miyapur Tr.’ When it comes to errant drivers, the roads are a goldmine. And while it’s not currently know how many challans the driver racked up, it’s one too many under all circumstances.

It would be logical to think, that a repeat offender would collect enough negatives to have their licence suspended temporarily or revoked for a specified time but that isn’t the norm. And as such, it would appear one can go on a spree of collecting challans and not have a thing to worry about until apprehended. A case in Bombay saw speeding fines amounting to Rs 1 lakh, an assortment of 103 pending challans certainly paved his place in the list of Indian serial offenders. An odd outcome, considering police forces can send notices to an address registered to a vehicle, and even send a SMS regarding an offence. Despite such measures, it seems there are plenty of loopholes that need to be weeded out when it comes to following up on offenders.

And while there are plenty of road rules and road safety programmes to make road users more responsible, trouble continues to brew. It’s great to know the offender has been apprehended, but what beggar’s belief is the fact that this repeat offender has gone unchecked for this long.

Repeat offenders have a pattern of being callous and breaking almost all road rules, and road safety being the least of their concerns. For this particular offender, rules broken are most likely to include speeding, signal violations and wrong side driving considering the vehicle hasn’t actually been stopped and checked until now.

Until repeat offenders are dealt with a strict hand, this callous attitude breeds, and grows. Though fines have been increased in recent years, it clearly isn’t enough to instill fear as is the case in this instance.

With a number of traffic offences warranting a fine of upto Rs 300, there’s now talks to increase certain fines to check errant behaviour. These include flouting obvious norms like parking in a no parking zone, using a footpath as a road, overspeeding, underage riding/driving, and even steering a vehicle without a licence.