The Made-in-India engineless train took its trial run in New Delhi. During this trial run, it breached the 180 kmph speed limit. It is set to commence commercial operations from January 2019.

Train 18 breached the 180 kmph speed limit in the Kota-Sawai Madhopur section. If track signals permit, it is also capable of touching the 200 kmph mark. 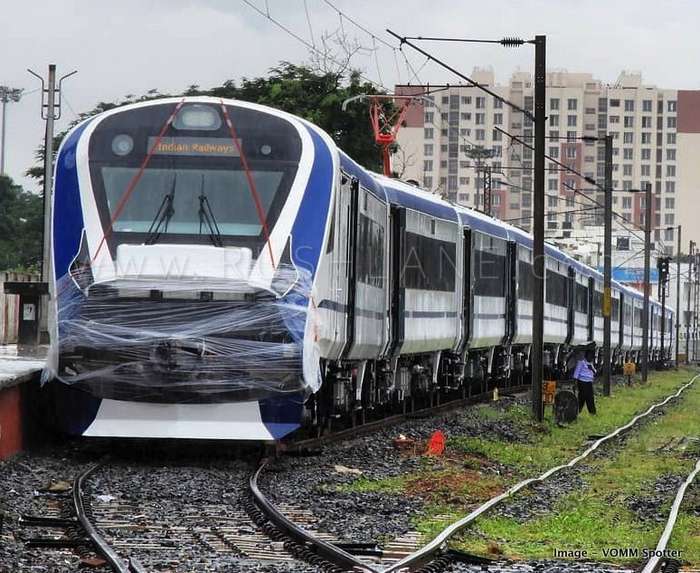 Train 18 is the first Made-in-India engineless train. It has been manufactured at the Integral Coach Factory in Chennai and contains 16 coaches with the same passenger carrying capacity as the Shatabdi Express. Trial runs normally take around 3 months to complete but tests on Train 18 have been completed faster than expected.

Train 18 trials were conducted in Moradabad where speeds touched 130 kmph while in Kota, Rajasthan speed went up to 160 kmph. The interiors receive rotating seats that can be aligned to the direction of travel in executive class. Watch the Train 18 perform stability test in the video below, shared by Rail Minister of India.

Train 18 is also seen with modular toilets with bio vacuum system, a modular rack for luggage storage with a glass bottom and sliding doors besides continuous glass windows. The doors open and close automatically at stations while the on board Wi-Fi and GPS offers passengers with information about travel status.

The cabins are completely air conditioned offering passengers better comfort and safety as all equipment is fitted under the carriage offering more space in its interiors. The train also gets an advanced regenerative braking system which saves power while the drivers cabins at both ends are aerodynamically designed for quicker turn around at destinations.

Following its successful trials and commencement of commercial operations in January, Integral Coach Factory promises one more Train 18 this fiscal while four such trains are planned for the next fiscal.