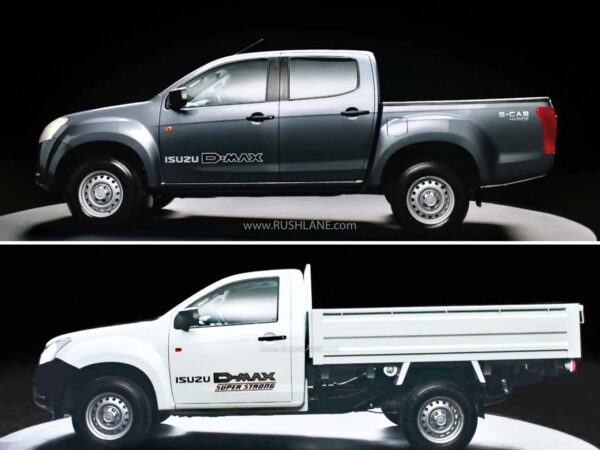 Isuzu is the only automotive manufacturer in India that hasn’t yet launched a single BS6 compliant vehicle. It has been more than six months now that the Indian automotive industry transitioned from BS4 to BS6 emission norms. We had earlier reported that the brand will be looking to launch its first BS6 product ahead of the festive season.

Now we have confirmed development regarding the same. The Japanese utility vehicle manufacturer has teased its first pair of commercial vehicles that are going to undergo the stricter emission upgrades. Isuzu is set to launch D-Max and S-Cab in its latest iteration on October 14.

Both commercial pickup trucks will be seen in their latest exterior and interior design. Although, not much is expected to differ from their BS4 predecessors. These models were previously powered by a BS4 compliant 2.5-litre diesel engine which produced 78 bhp and 176 Nm of torque. The same engines are expected to be offered in their BS6 guise. Isuzu might also add the new 1.9-litre diesel unit to the range.

Other models retailed in India

Apart from the commercial models- Isuzu also retails two passenger vehicles- the D-Max V Cross and MUX. There has been no news regarding them yet but are expected to be updated soon. The V-Cross has been upgraded to a new generation in international markets but it is not expected to arrive in India soon. While V-Cross is a lifestyle utility vehicle, the MUX is a full-size premium SUV rivaling the likes of Toyota Fortuner, Ford Endeavour and MG Gloster. Both are based on the same platform.

Isuzu had to delay the launch of its BS6 products due to the ongoing crisis of Covid-19. Also, many BS4 models were stuck in Isuzu dealerships which were cleared only after the Supreme Court in July gave its consensus to FADA (Federation of Automobile Dealers Association).

It is to be noted, in a recent order made by the Supreme Court, BS4 compliant cars and bikes which were sold to dealers before March 31 deadline but could not be registered due to Covid-19 pandemic, would be eligible for registration.

Isuzu officially entered the Indian market with the V-Cross in 2016. The model was first showcased at the same year’s Auto Expo. However, despite its more than decent off-road capabilities it has not been able to garner’s much appreciation from consumers.

Till now, the brand has been able to establish its network in just 43 dealer outlets. It will make more sense if Isuzu offers some additional upgrades alongside the mandatory BS6 update when it launches these upcoming models.