To make global debut in India on the 15th of November, the all new Jawa 300 cc motorcycle from Mahindra’s Classic Legends has reportedly leaked. The image you see below was clicked by an automotive enthusiast when the motorcycle was in Pondicherry for TVC shoot earlier today.

Built to take on the Royal Enfield, new Jawa 300 Classic motorcycle is powered by a single cylinder 293 cc engine which delivers 27 hp power and 30 Nm of torque via 6 speed manual transmission. 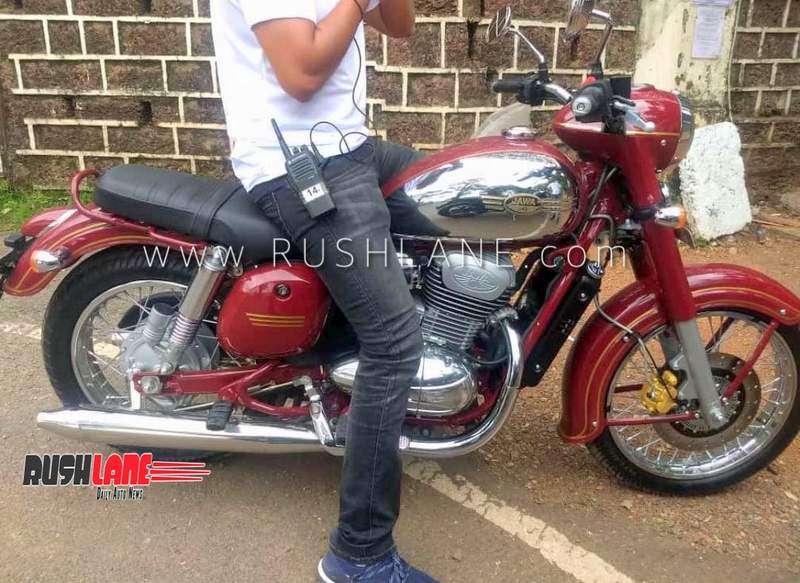 With 10 days to go for Jawa Motorcycles to re-enter the Indian market and showcase its first two wheeler, there’s now a crips spyshot that privies a fair insight into what to expect. At first sight, they’re going after Royal Enfield. Retro styling, plenty of chrome, and this deep red-maroon shade with gold paint lines that seem hand drawn.

Under the Jawa brand, Mahindra will launch a series of new motorcycles. The first one you see, is in the leaked image above. There are many more styles like the Cafe Racer (Continental GT rival), Off-roader (Himalayan rival), Bobber in the making. A total of 4 new styles were teased by the company in the teaser video which can be seen below.

One would think that the engine is same as the one seen on Mojo. Cause both have very similar cubic capacity and output. That is not the case. Mahindra’s Classic Legends has confirmed that this is an all new engine and has got nothing to do with Mahindra’s Mojo engine. Not a single part is shared between the two engine.

As one can notice from the teaser video, all motorcycles are powered by the same 300 cc engine, and are based on the same platform. Also, all these new age Jawa bikes are going to rival some or the other Royal Enfield which is on sale in India.

From the image it is clear that the Jawa 300 Classic carries a vintage look, very similar to the original Jawa motorcycle. It does get a disc brake in the front with golden caliper and steel braided wire, but at the rear is a drum brake. Other visible features are spoked chrome wheels with MRF tyres, telescopic forks in the front, pair os shock absorbers at rear, large radiator etc