RUSHLANEDAILY AUTO NEWS
HomeBike NewsJawa deliveries to start by April 2019 for buyers who booked in...

Jawa motorcycles were launched on November 15, 2018. Its been over three months since Jawa was officially launched in India, but till date there has not been a single delivery made. Production is yet to start, but the company managed to collect enough bookings in less than 40 days, to keep the order books full till Sep 2019.

Those who have booked Jawa motorcycles, Jawa and Jawa 42, are eagerly waiting for deliveries to start. When a twitter user asked the question – “Are Jawa motorcycles well tested? Heard Mahindra launched it in a hurry !” Jawa replied – “Rest assured, you can never go wrong with a Jawa! We are beginning deliveries in March-April for customers who booked in Nov 2018. Do stay tuned.”

Even though Classic Legends had made it clear at the launch itself, that deliveries will be delayed. But, it would have been great if the company could have expedited the production process. Earlier, there were talks that Classic Legends wants to provide the best quality products to its customers, which is why production is taking longer than expected. Whether this is true or not is yet to be determined.

Until now there had been no official communication as to when Jawa will start deliveries. Finally, the same has been communicated via twitter. Though exact date is not mentioned, it is still better than having no idea as to when deliveries will begin of a motorcycle which was launched back in Nov 2018. First Jawa motorcycles will be delivered to customers by April 2019, about 6 months after it was launched officially. Both Jawa and Jawa 42 motorcycles will be delivered to those who booked in Nov 2018 first. 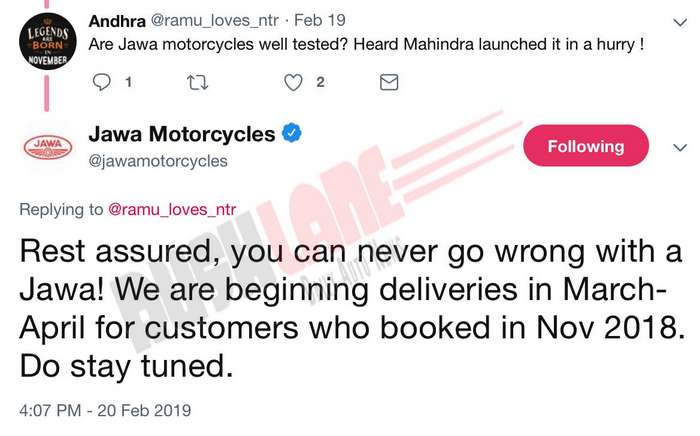 This is welcome news for Jawa fans, as they have been eagerly waiting to ride their favourite motorcycle. Jawa motorcycles have just started to reach dealerships. The company has now opened 50 dealerships in major cities across India. About 55 more will be opened by end of March 2019. Most dealerships have display bikes, test ride bikes will arrive later. The display bikes are still pre-production variants.