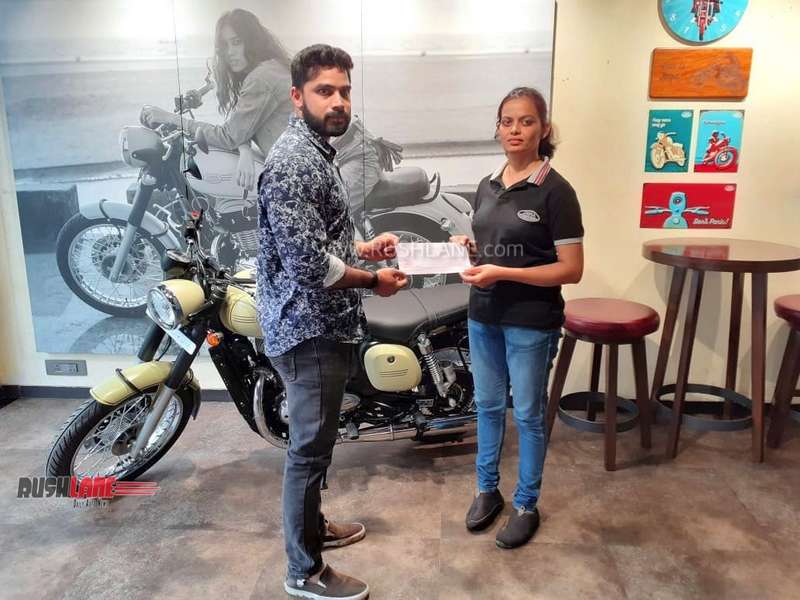 After waiting for months, Gunwant Khobragade finally took delivery of his Jawa 42 equipped with dual channel ABS. This is one of the first Jawa motorcycles equipped with rear disc and dual ABS in India. It was delivered yesterday by Jawa Nagpur dealer – Shree Kushal Motor.

Jawa Motorcycles has made its customers wait for quite some time, but finally dispatches have begun. But they are happening at a really slow pace. With Jawa not releasing sales or booking numbers, it is not clear as to what is the company’s sales performance.

Jawa and Jawa 42 were initially launched with single-channel ABS with rear drum brake. But after bike enthusiasts expressed their disappointment, the company introduced dual-channel ABS for both bikes.

However, customers choosing dual-channel ABS had to wait longer, because deliveries for dual ABS variants started now, while deliveries of single ABS variant started in March end. But not all customers who are waiting have managed to get delivery. Many customers are showing their anger by posting updates on social media.

Launch of Jawa and Jawa Forty Two has been a true delight for retro fans who can now look forward to reliving their past. Jawa derives inspiration from original Jawa motorcycle of the 70s and it sports the vintage look with its curvy bodywork, teardrop headlight, polished chrome accents, and rounded rear view mirrors and indicator lights.

In comparison, Jawa Forty Two features retro-modern styling even though its core setup is based on the original Jawa. Jawa Forty Two is sportier and comes with low-mounted handlebars that command an aggressive seating position.

The third Jawa that was unveiled in November last year was Jawa Perak, which is a Bobber styled motorcycle. However, Perak’s production has been postponed due to heavy demand for Jawa and Jawa Forty Two. To make it easier for customers to buy Jawa bikes, the company has partnered with various banks to provide finance options.