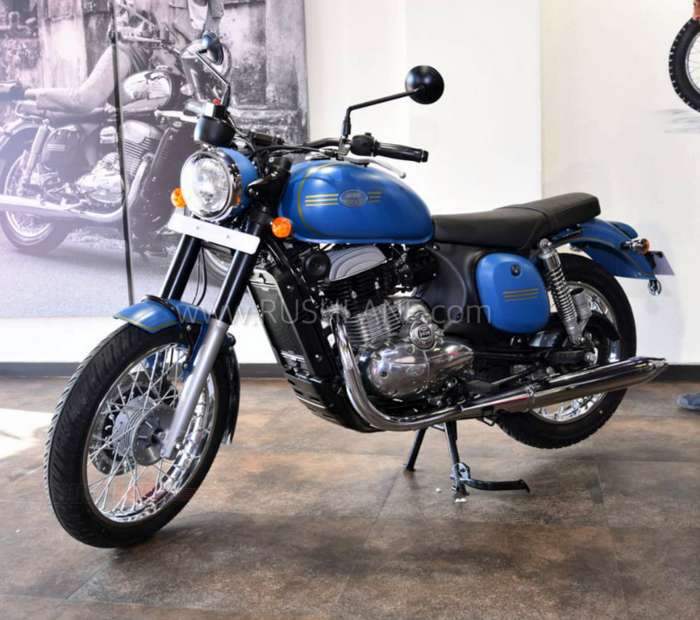 After a long wait, Mahindra owned Classic Legends has finally started deliveries of Jawa Motorcycles. Though only a handful of owners have received their Jawa motorcycle, and thousands are still waiting. The company claims that they are working hard to start deliveries at full pace.

Since launch, about 150 units of Jawa motorcycles have been dispatched from the company plant in Madhya Pradesh. Most of these units are being used as display and test ride bikes at the 100 dealerships of Jawa across India. One dealer has now shared a short video of accessorised variant of Jawa 42. In this video, you can see the new Jawa 42 fitted with crash guard, saree guard as well as pillion seat backrest with luggage carrier. These two are among the first official accessories launched by Jawa.

If you notice, the Jawa 42 in the video is missing the handlebar-end mounted rear view mirrors. These were showcased at the time of launch, as well as in the promotional photos and videos. But these are not on offer as standard equipment. They will be sold as accessory. Center stand too is sold as an accessory. Price of accessories has not been revealed yet. Take a look at the video below.

Jawa 42 in the video is seen without a tachometer. Some owners are of the opinion that the Jawa 42 could have been given a more modern touch, like giving tachometer, centrally placed locking system, etc to the Jawa 42. But as it shares a lot of parts with Jawa, cost cutting is quite evident. Apart from accessories for Jawa and Jawa 42, the dealership also sells helmets, t-shirts, saddlebags, etc. All Jawa branded. Along with selling Jawa motorcycles, Jawa also hopes on selling huge amount of merchandize, following a similar strategy as rival Royal Enfield.

Jawa twins are powered by a 293 cc liquid cooled, single cylinder, DOHC engine that generates 27 bhp of max power and 28 Nm of max torque. Engine is mated to a constant mesh 6-speed gearbox. As per ARAI, fuel efficiency of Jawa twins is 37.5 kmpl, which is better than most of their rivals.