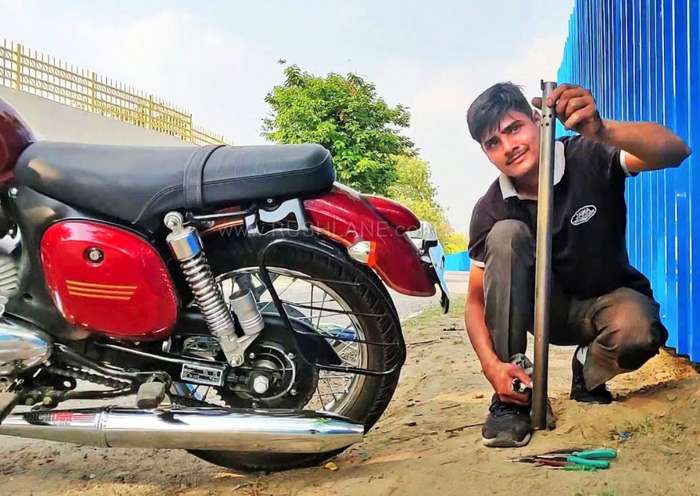 It was a momentous occasion for Mahindra owned Classic Legends when the company delivered its first Jawa motorcycle to one of its customers in Indore on March 30. As deliveries continue, albeit at a relatively slow pace, some owners have already started modifying their machines.

At the time of launch, Jawa exhaust note was one of the major talking point for excited buyers. Unlike its rival Royal Enfield, Jawa motorcycles sound is more refined, and does not deliver the thumping effect. Some buyers were happy with this, as they did not like the loud sound of RE machines, while others wanted RE like thumping sound from their Jawa machines.

In order to achieve Royal Enfield thump in Jawa motorcycles, one owner has now gone ahead and removed the DB killers from the exhaust of his Jawa 42. The owner has posted a detailed video about the modified Jawa exhaust along with sound (before and after). You can watch the video below, which is posted by Footloose Dev on YouTube.

What are DB killers? Well, they basically do the job of keeping the exhaust sound in check. Without them, the exhaust note will increase. This might be illegal as now the exhaust note / sound is possibly higher than the permissible limit. And with Supreme Court ruling on modification ban, this could cause trouble.

In other news, after months of waiting, Classic Legends has finally answered the quintessential question “kitna deti hain”. Responding to a tweet posted by a user, Classic Legends revealed fuel efficiency of Jawa and Jawa Forty Two at 37.5 kmpl. This is the official figure, as certified by ARAI (Automotive Research Association of India). Jawa and Jawa Forty Two have the same 293 cc, liquid-cooled, single-cylinder, DOHC engine that generates 27 hp of max power and 28 Nm of max torque. Engine is BS-VI ready and mated to a constant mesh 6-speed gearbox.

However, Jawa twins’ mileage in the real world is likely to be different because ARAI results are obtained in standardized test conditions. In ARAI tests, there’s no provision for things like traffic movement, condition of the bike and riding skills of the user. If we look at Mahindra Mojo XT, which shares similar engine as Jawa twins, it has a fuel efficiency of around 28 kmpl in city traffic and approximately 33.4 kmpl on highways. Jawa twins come with a different state of tune, but still this is what one can consider as approximate mileage of Jawa twins in real world conditions.