Jawa is yet to start deliveries of their motorcycles which were launched on 15th Nov 2018. As those who’ve booked Jawa motorcycles look forward to deliveries, those getting deliveries in March are already informed, claims the company on Twitter. Buyers, whose deliveries are lined up in April will be called on 31st March 2019. Jawa dual channel ABS motorcycles are scheduled for delivery starting June 2019.

In the meantime, Jawa Motorcycles is working on a fundraiser. Jawa fundraiser revolves around an auction of specially created Jawa motorcycles – called Jawa Signature Edition. Proceeds will be used for education for the children of martyrs.

To be held on March 29, 2019 at 7:30 pm in Mumbai, bidders get to pick a chassis number of their choice between 1 to 100. The Signature Edition Jawa motorcycles will wear an exclusive tri-colour livery on the tank, and a custom monogrammed fuel tank cap with the owner’s name etched on it. Jawa has not revealed which motorcycles of theirs will be sold as Signature Edition. It is most likely going to be the Jawa, Jawa 42; and not the Perak as launch of the latter has been postponed to end of 2019.

Signature Jawa motorcycle owners will also have access all exclusive brand events, promotions, and offers on Jawa merchandise. A commemorative coffee table book about the brand is part of the package. Owners will also be offered a ‘Service Package’ valid for 42 months from date of delivery. This will make possible complimentary periodic services, including consumables listed for standard maintenance schedule. Jawa also says this in their announcement, ‘Make sure to not crash the Signature edition Jawa, as accidental repairs will be a hit on your heart and wallet!.’ Well, we feel you. 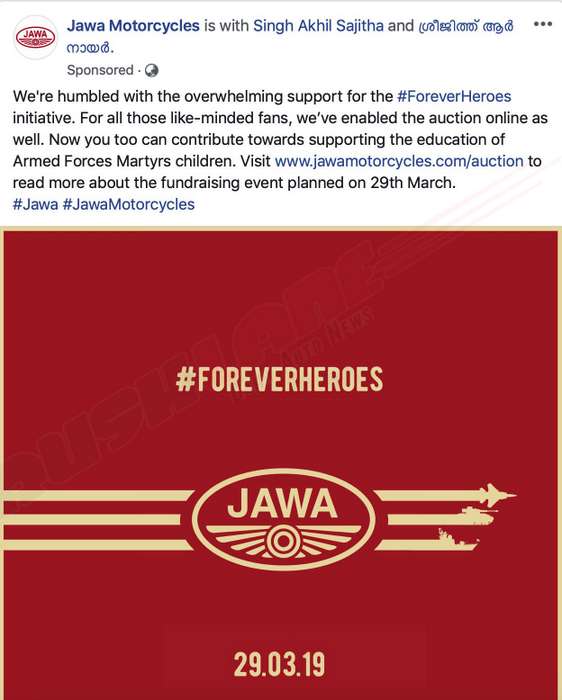 For those not attending in person, the fundraiser is open to online participation. Signing up for the online bidding process requires a few personal details, and selection of User ID and Password is mandatory. A preferred choice of chassis number is required. For chassis number selection, bidders need to indicate a preferred bid amount they’re willing to pay.

While this won’t become your mandatory minimum bid, it will help help determining final chassis numbers that will be put up based on popularity from online participants, owing to the limited number of bikes. The most sought-after numbers will be put up for auction. Online participants need to upload KYC documents as part of the registration process. The step if not fulfilled at the time of registration can be completed later through the profile login.