JCB tractor does a top speed of 166 kmph – Video 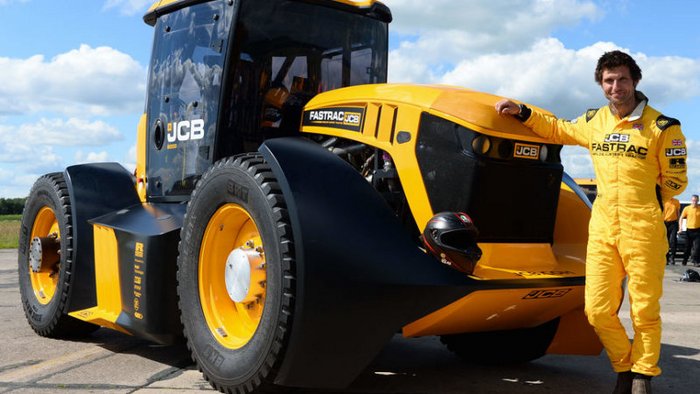 Guy Martin, a former truck mechanic and motorcycle racer turned TV personality, has done it again. This time round, he’s taken a modified J C Banford Excavators Fastrac farm tractor to a new JCB tractor speed record of 166 kmph (103.6 mph). This feat was achieved at Elvington Airfield near York in the U.K.

The JCB tractor, Fastrac was modified by Williams Advanced Engineering, This was to give it a lighter weight, and an aerodynamic stance so as to achieve this record speed.

The JCB tractor is powered by a 7.2 litre, 6 cylinder DieselMax engine, produced at the factory in Derbyshire, offering 1000 hp power and over 1800lb/ft torque.

The Williams Advanced Engineering team worked on the vehicle to drop some weight and introduced aerodynamic tweaks for the feat. Though modified in terms of weight and aero dynamism, there were no modifications done to the engine.

This is not the first time that the company has set records. In 2006, it was the DieselMax Streamliner that was taken to a top speed of 350.092mph (563.41km/h) at the Bonneville Salt Flats.

This new record comes exactly 28 years since the first production model rolled off the line. Lord Bamford developed a tractor which was not only highly capable for field work but which also commanded high road speed.

JCB had long been working on this project to develop a tractor to break the speed record. The Fastrac achieved just that assisted by a team of British engineers honing both their skills and innovation in ensuring that the tractor achieved these results.

The JCB Fastrac is a high speed agricultural tractor series manufactured by JCB Landpowr, a part of the JC Bamford Group. It entered production in 1991 and continues in production to this day. The normal speed is at 65 kmph but this new record has shown off its advanced capabilities thanks to modifications from Williams Advanced Engineering.