When the Jeep Compass went on sale in India in mid-2017, it looked like the premium SUV is set to offer FCA India the much needed break. The competitively priced SUV had a strong start with waiting period extending to several months in some parts of the country.

After the initial euphoria, the most affordable Jeep in India settled into a rhythm, posting consistent monthly sales performance. In the advent of fresh competition from the likes of Tata Harrier and MG Hector, the Jeep Compass slowly started losing its shine. Except for July 2018, Jeep Compass has not posted sales growth in a single month since launch.

Both its rivals are priced aggressively and didn’t waste time in creating their own fan bases. So, the American SUV started witnessing erosion of its marketshare in what is turning out to be a hotly contested segment. Combine that with the general slowdown of the industry, the Compass just endured its worst month in the country in July, clocking sales of just 511 units, a 57% Y-o-Y decline. MG Hector posted sales of 1,508 units in same month. 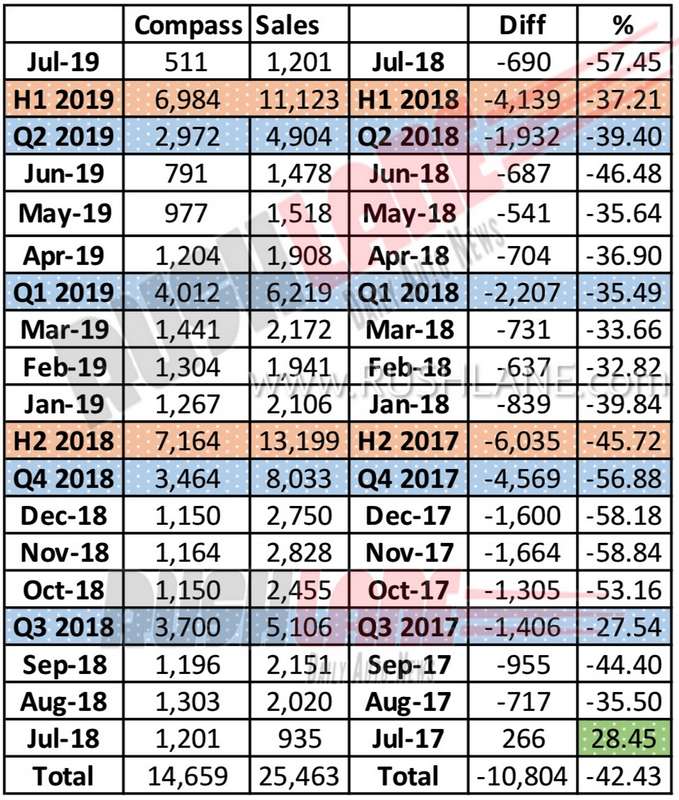 Since the beginning of 2019, the sales performance of the Jeep Compass has been declining steadily. With Kia Seltos set to arrive later this month, FCA has its work cut out. The locally manufactured Jeep is still some months away from its mid-life refresh and we think that the current situation warrants an aggressive marketing move immediately.

Globally too, FCA’s prospects do not look any brighter. Costs cutting is prevalent across all markets. The company recently announced that the FCA India MD and CEO, will also be the MD and CEO of FCA Australia.

The Jeep Compass is priced between INR 15.60 lakh to 27.6 lakh (ex-showroom, Delhi) and is available in six trims – Sport, Sport Plus, Longitude, Limited, Limited Plus and Trailhawk. The premium compact SUV is powered either by a 1.4-liter Multiair turbocharged petrol engine or a 2.0-liter MultiJet diesel engine (also powers rival SUVs Tata Harrier and MG Hector). The former is rated at 163 PS and 250 Nm of torque while the latter is good for 173 PS and 350 Nm of torque.

A 6-speed manual transmission is standard across the range but the petrol unit can also be opted with a 7-speed DCT. 9 Speed DCT is exclusive to Trailhawk, which also gets BS6 compliant engine. The Compass diesel can also be specified with 4×4 system in Limited and Trailhawk trim.

With Uconnect touchscreen infotainment system, multiple airbags, leather upholstery, power adjusted driver seat and so on, the SUV is rather well equipped but its main problem is that the competition offers more for less.